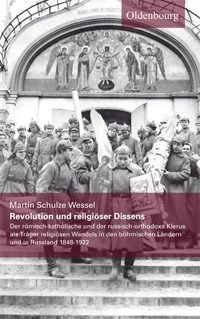 At first glance, the Orthodox Church in Russia and the Roman Catholic Church in the Czech lands seem odd subjects for historical comparison. It appears that the two institutions, as well as their cultural, theological and political environments, differed so radically as to preclude fruitful analysis. Yet Martin Schulze Wessel keys us into intriguing similarities: before World War I, both churches featured substantial reform movements. During the 1920s, both suffered schisms after the decidedly anti-clerical revolutions of 1917 and 1918. And in both places significant secularisation took place (in all its three meanings) before and after the 1917/18 revolutions. Rather than an unlikely comparison, readers discover a fascinating and mind-expanding realm of historical analysis.

The book divides into six chapters (besides introduction and conclusion): first an essay on church-state relations in the Habsburg and Romanov lands, then four chapters comparing various aspects of these relations (for example nationalisation of the liturgy, memory and religion, ethnicisation of religious conflict) in two revolutionary periods (1848 in the Czech lands and 1905 in Russia; 1918 in the Czech lands and 1917 in Russia). The final chapter discusses opinion polls (taken in 1918 and 1905) as indicators and factors of religious change.

In Russia as well as the Czech lands, reform clergy favoured changes that would connect the priests more closely to modern secular society, in lifestyle, dress, attitude and behaviour. In both cases reform priests thus sought to grow closer to lay believers and appear less as mediators between God and man; sacramental life was less important than ethical teaching. As part of their more secular identities, clergymen wanted increased rights of participation vis-à-vis the episcopate, and they wanted a relaxation of celibacy.

In the Czech lands, Catholics were German and Czech, yet Catholic priests were taken disproportionately from the Czech population. Schulze Wessel sketches their predicament: symbols most dear to the Czech national movement - like the Hus cult - were unacceptable to them, indeed heretical. Perhaps partly for that reason, the Czech reform clergy seems to have been relatively small, a self-selected group united by common sensitivities.

There are broader questions about experienced religiosity that complicate generalisations about priestly reformers, and Schulze Wessel appropriately sensitises us to the difficulties of correlating "Catholic modern" with expectations we have of modernity more generally. For example, liturgical reform was supposed to achieve a heightened emotional experience of religion while we today associate modernity with reason. In the German case, Lucia Scherzberg and others have shown how emotionally experienced communal religiosity led some reformers deeply into "irrational" organic nationalism, indeed racism.

In Russia we see similar demands among reform clergy, for example for increased participation and relaxation of celibacy. After the October Revolution, the Bolsheviks attempted to exploit these sentiments to help drive a wedge in a hostile institution. Yet there were also differences to the Czech case. Even if, as we know from the recent work of Victoria Frede [1], atheism was almost a group trait among the Russian intelligentsia, Russia failed to produce the coherent anti-clericalism that so bedevilled Catholicism in Bohemia. One might say more generally that the gap separating (mostly non-believing) educated society from the (mostly believing) common people was much larger in Russia. One further difference concerned the vernacular liturgy, which formed a central concern of reformers in the Czech lands but not in Russia. Perhaps Church Slavonic did not seem as alienating as Latin. By contrast, the Czech reformers "used the translation of the liturgy as the vehicle for [...] founding a new church" (213). At this point one wonders about the differing national movements that challenged the churches in each place. Was Russian official nationalism really comparable to the bottom-up Czech national movement?

If the two churches faced differing kinds of national movements before the war, afterwards they functioned in two different states, one totalitarian and socialist, the other liberal, no matter how anti-clerical its founders. The former visited violence upon clerical persons while the latter abused religious symbols (most dramatically in knocking over the Marian column in the old town square in Prague). Much in contrast to Russia, where holy objects were confiscated, the interior spaces of Czech churches were not tampered with.

The reform movements appear to have had strong arguments, but the splinter churches they produced in the 1920s proved relatively marginal. The immediate events triggering schism differed in each case: in Russia it was the willingness of priestly reformers to sacrifice church bells and other valuables to state campaigns against hunger that precipitated the split; in the Czech lands it was defiantly public wedding ceremonies of priests and the use of the vernacular during mass. By the late 1920s the overall number of adherents of the new church movements was a bit more than five percent across the Czech lands, and, despite the favour of the socialist state, about 16 percent in Russia (and this "living church" disappeared completely after World War II). How does one explain this weakness? Perhaps emphasis on the secular, lay quality of the priesthood robbed this group of its sense of charism. In the Russian case, the hierarchy easily fended off the challenge of the "living church", by simply reasserting its authority, a quantum that had survived the challenge.

But why did a church using the vernacular not enthuse more Czechs? Perhaps the Czechs indeed found their religion in the nation, (Tomáš Garrigue Masaryk said the Czech question was a religious question, 119), and therefore the Catholic Church could serve as a quaint background, like the baroque churches that dot the Bohemian countryside, relevant for a few moments of passage in one's life, but otherwise so harmless that one did not have to bother officially leaving it: stepping out of the church produced no material gain.

In both cases, secularisation has proceeded apace over the intervening decades. Did the two churches, and their openness or resistance to reform, matter for that process? Lenin treated Orthodoxy with contempt; it represented not a coherent system of teachings and beliefs, but a prejudice held by the unenlightened. In fact, with increasing literacy its influence has steadily declined.

Beyond presenting us with an exemplary comparative history, Schulze Wessel challenges us to wonder about the universality of modernising forces that place pressure upon religion and transcend the divide between capitalism and socialism. Do other Christian churches - indeed, other religions - experience similar tendencies to "reform", with the priestly caste wanting to grow closer to secular society? How and why do the religious institutions defend themselves, and in a series of complex maneuvers, as Brian Porter-Szűcs has recently shown in a masterful study of Polish Catholicism [2], successfully adapt to modernity? Why do some fail?