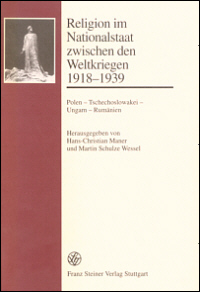 The essays presented here exhibit some of the newest research into religion and society in modern East Central Europe, focusing on the years between the two world wars. They leave the reader with a sense of discovery of new sources, but also rediscovery of forgotten scholarly work, and anticipation of an emerging literature that will serve as a treasure trove for the student of comparative history in and beyond this region. Each of these well-crafted, often suspenseful essays is based upon a broad array of sources, including journal articles and books that have appeared in regional languages in the last decade, but also sociology and other scholarly work from the period itself, most of which was buried by decades of neglect. As the editors note in their introduction, religion was thought by the communist regimes as a "residual category", destined for early extinction.

Perhaps the soundest general lesson to be derived from this research on Hungary, Czechoslovakia, Rumania, and Poland is about the churches' chronic inability to resist the demands of the respective national state, especially in issues of nationalist legitimation. At best, one seems to detect differences in degree, by country and by period, with the 1930s witnessing extremes of subservience. Thus the Rumanian Orthodox and the Hungarian Catholic hierarchies not only fully supported "their" nations' respective efforts at creating ethnically - and therefore religiously - homogenous societies. This commitment extended in Hungary (Norbert Spannenberger) to resistance to all talk of social reform, and collaboration with national restoration in every social sector, whether education, the military, or social policy. In Rumania (Hans-Christian Maner) it caused a number of Orthodox priests to attach themselves to the Legion of the "Archangel Michael".

Taking society as a starting point, Juliane Brandt investigates the power of common religious identity to overwhelm ethnic difference in modern Hungary. Her findings will disappoint enthusiasts of multiculturalism. On the one hand, modernization increasingly made religion a matter for the individual, unconnected to other roles one might play in society, save, as the author must conclude, national identity. On the other hand, whenever ethnic homogeneity failed to obtain, the church became a battle ground for competing nationalisms (63). What this meant concretely was that the Slovak-Hungarian dispute reproduced itself in the protestant churches as it did in all other spheres of society.

When one adopts a longer time horizon, the interwar years seem predestined to such collusion between nation and faith: for the first time, East Central Europe was a region of national states, and the dreams of national movements might be realized. And if the Rumanian or Polish churches had served these movements before "independence", why not after? Still, there were limits. In Werner Benecke's depiction of the Russian-Orthodox church in interwar Poland, the Polish Catholic Church figures mostly as a passive witness to attempts by the state to harass the Polish Orthodox church and its faithful, especially in the Chełm region. Éva Mártonffy-Petrás shows how the backward stance of Hungary's episcopate provoked a reaction from the younger Catholic intelligentsia, who were concerned by rising turmoil in the countryside. They dubbed the social question the "inner side" of the national question, and gave a socially progressive reading to "Quadragesimo anno", a famously adaptable document. Indeed, it was the bishops' restrictive interpretation of this encyclical which had sparked the opposition of these young intellectuals in the first place.

Youth also figures as a primary theme for Alexandru Zub in his work on the Rumanian Orthodox church in the "cultural historical context" of the period, but he evokes a more extreme situation than in the other countries discussed in this volume, which generated "eschatological reactions" and a newly radicalized, provocative language (180). In this context leading intellectuals, especially historian Vasile Pârvan, took on leading roles, and made talk of church reform a matter for more than just theologians. Religion had a central place in Pârvan's call for "Hebung der Humanität durch Erziehung, Kultur und Arbeit [...]. Die Reform der Kirche [...] könne nicht rein administrativ sein. Sie müsse von einer Änderung der christlichen Konzeption über die Welt und das Leben ausgehen." (182).

How these high ideals played out in social reality is not thematized, nor are explicit attempts made to relate this critique of modernity to political movements. Remarkably, the word 'fascism' appears in none of this volume's essays. In Zub's view, national unification had freed Romanian intellectuals "vom Druck des Nationalen", (184) and he criticizes what he views as misplaced emphasis on their nationalism. He does not directly refute earlier work on the younger generation, for example by Eugen Weber, which had documented its high propensity to support fascism, though he does admit to the attractiveness of the Action française, Oswald Spengler, and other critics of democracy in interwar Rumania. The Hungarian intellectuals discussed by Mártonffy-Petrás likewise read the literature coming from France, but also the charismatic and influential Austrian Othmar Spann.

In a discussion of Spann it seems even more unusual not to wonder about the prevalence of anti-liberal and anti-democratic sentiment among East Central European intellectuals. He did, after all, serve as a conduit for many nationally minded Austrian and Sudeten German Catholics into the Nazi movement. The point here is not to tar intellectuals with the brush of fascism, but rather to question the place of East Central European thinkers in a phenomenon that gripped Europe and indeed the world in the 1930s.

Predictably perhaps neither fascism nor eschatological crisis enter into Martin Schulze Wessel's essay on Czechoslovakia, a state that famously adhered to liberal democratic norms in the period discussed. Instead he addresses the fascinating and little understood phenomenon of Czech secularism and its clash with the ostensible religiosity of the Czech national movement. The author skillfully plots relations between the interwar state, supposedly the apotheosis of Czech nationalism, and the Catholic Church, which in Bohemia figured as a representative of foreign interests. There was remarkably little conflict, indeed, the Czechoslovak state tended to decide in favor of the Catholic Church in its disputes over church property with the new Czechoslovak Church.

Once again we seem to encounter a primacy of the political over the religious, but there is more to the story than that. Do we have evidence of the ineluctable victory of the modern over the premodern? Was the most sociologically advanced society in East Central Europe predestined for its highly secular public life?

That might be the conclusion drawn from Hartmut Lehmann's wide-ranging and suggestive introduction, which surveys relevant literature on Western societies. In what seems a straightforward imposition of Western standards of development, he asks how "retarded nation-building" stands in relation to "retarded secularization". Actually, the pairing of these developmental timelines offers interesting ways of thinking about religion and politics in the East Central European past and present. The Western European pattern, which Lehmann knows so well, serves not so much as a yardstick or as an ideal type, but increasingly as a tendency toward which a number of former Soviet Bloc states now seem to be gravitating. We should not be surprised, however, if in the end Rumania, Hungary, Poland, and the former Czechoslovakia again fail to fully conform to the expectations of modernization's proponents. As a "zone in-between" they will continue to reward comparative study.