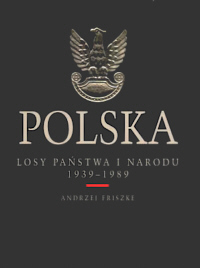 Andrzej Friszke, one of Poland's most productive modern historians, has compiled a Polish history for the years 1939 to 1989. One could hardly ask for a more balanced or competently written work on a period full of controversy and only recently available to full historical analysis. Friszke provides a wealth of information on the major events: war, Stalinism, 1956, 1968, 1980-81, and the transition to a multi-party system. Insights are particularly strong on his subject of expertise: political opposition. The book's conclusion contains a helpful overview on demographic changes, new boundaries, trends in Polish-Soviet relations, and the debate on whether Poland was a totalitarian society. Here Friszke concurs with the view of Antoni Dudek, that from 1956 one can speak of Poland as a country with "totalitarian tendencies." Only in times of crisis was Polish society able to exert effective pressure on the state, visible for example in the activities of Communist reformers. The author attributes the radical changes of the late 1980s to the fact that Poland like the Soviet Union was falling ever faster behind the West. The regime was particularly afraid of an explosion of social unrest. The one weakness I could detect in coverage of events was the Thaw period, which is dealt with in a couple of pages. This is unfortunate, given the uncertainty of the precise sequence and combination of factors that gradually caused a break with original Soviet models, and the protracted meander between reform and repression that followed the Polish October.

In every controversy one finds Friszke somewhere near the center. He has no scores to settle with former political opponents (in fact the reader may not be sure who they might have been), and his passion is reserved for a comprehensive recounting of political history, with much helpful background on economy and society. He thus achieves the remarkable feat of critical sympathy with a range of subjects. If there is much open admiration for the Catholic Church as a refuge for civil society, there is no facile condemnation of the Party. He grants for example that many made their way to Communism over disgust with the "social injustices" of Piłsudski's Poland, and real hope to achieve "material progress" for their country (175).

The author so surely places himself at the center of controversy that one often wishes for stronger judgments. He writes for example that some say the western allies had no influence in Poland's fate. Others say that Poland was betrayed. What about Friszke? His book is packed with history, but contains little historiography. Why not? In part the issue is a standard truism that before 1989 "it was not possible to write modern history in a way that was in keeping with the truth." (7) The author is of course right that nothing could be written in official Polish media that did not go through censorship. Hundreds of books and thousands of articles were written in the West about Poland, but little of that informs this book's vision of the past. No work not translated into Polish has informed this study.

But the book's use of newly available historical sources might also be described as disappointing. As a land between East and West, with qualities of both extremes, Poland is an ideal place to wonder about the interrelationships of political culture and socio-economic development. Fifteen years after the opening of archives, one might have hoped that a general history address big questions, for example about the growth of democracy in Poland. An assumption underlies much of the older work on Poland that, had the Soviets not intervened, Poland might have enjoyed the fruits of democracy. Is that true? Was there a consensus in postwar Poland for liberalism that was crushed from outside? From the opposite end of the book, one might have hoped for more consideration of what Communism wrought in Polish society. Friszke notes that reform succeeded in Poland in the late 1980s, while it was still unthinkable in most other Bloc countries. What made Poland special? And why has Poland had a smoother transition than other former Soviet countries? Perhaps, as Ralf Dahrendorf once surmised for Germany, the destruction of old elites removed some of the obstructions to democracy. Or was the creation of a largely mono-ethnic Poland the decisive factor? Or the odd conjuncture of factors in the late 1980s: the fact that neither regime nor opposition could impose its will upon the other?

Readers searching for more historical judgment may be better satisfied with Andrzej Paczkowski's history of 1997, which also covers the years 1939-1989. Friszke terms Paczkowski's treatment "essayistic," but he does so with evident respect. And so perhaps it is more appropriate, not to ask of Friszke a grand synthesis or questions he might regard as speculative, but rather to assess this work in its own terms: and here one must judge it a success. Friszkes history is an accurate, eminently fair, wide-ranging and well-paced study of Poland under dictatorship. And if it ignores literature not in the Polish language, it does provide a comprehensive survey of work that has appeared in Polish, often on the minutest subject. As such it is a work that every Western scholar interested in Poland should have close at hand.