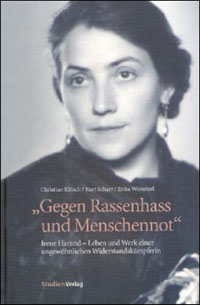 In the 1930s a remarkable movement formed in the center of a Europe dominated by national chauvinism: it called itself the "World League Against Racial Hatred and Human Need." But it was also known as the Harand Movement, after its charismatic leader, the Viennese writer and activist Irene Harand. This movement, though it counted several tens of thousands of members across the Continent, and published millions of copies of newspapers and books opposing racism and anti-Semitism, is all but unknown in its region of origin. The authors of this volume have combed archives throughout the United States, Central and Eastern Europe (including Russia) in search of documents and photographs and present as full a history of Irene Harand's life as one could hope for.

Almost everything about this history seems unlikely. Harand (orig. Wedl), a strikingly attractive woman whose face figured prominently in "her" movement's visual propaganda, was born into the relative comfort of a Viennese bourgeois family in 1900. Shortly after World War I she married the Austrian Captain Frank Harand, and in the 1920s worked as a secretary for a small pensioners' union (Kleinrentnerverband) directed by the lawyer Moritz Zalman. Harand rose in the organization, and with time was entrusted with editing the union's newspaper. In 1930 Zalman and Harand founded a political party - the first Österreichische Volkspartei - dedicated to the interests of those on fixed incomes. But this party also stood up against anti-Semitism. With the coming to power of the Nazis in Germany in 1933, Harand began publishing a separate weekly called "Gerechtigkeit", in which week for week she and her collaborators exposed the falsehoods behind Nazi propaganda about Jews. In 1935 Harand published "Sein Kampf" (later translated into French and English) in which she refuted claims made in "Mein Kampf", point by point. When the Gestapo raided her offices in March 1938 they had orders to shoot her "on sight." Fortunately she was speaking abroad at that moment. She and her husband became exiles in the United States.

Why is this story so little known? The most important reason is the Nazi seizure of power, after which the new rulers forbade Harand's newspaper and organization, imprisoned (and later killed) several of her collaborators (including Zalman), and confiscated their archives. After World War II those archives were then confiscated by Soviet forces and taken to Moscow (where by a stroke of good luck one of the volume's authors - Kurt Scharr - discovered them while doing civil service in 2000). But there is more to this story of forgetting: like the great majority of Austria's anti-Nazi emigration, including fellow Catholics Johannes M. Oesterreicher, Ernst Karl Winter, and Dietrich von Hildebrand, Harand failed to return home after 1945. She and her ideas were not considered relevant. In Cold War Central Europe the battle against racism was no longer politically urgent. In the 1960s Harand was "rediscovered" and honored by both the states of Austria and Israel, with the latter declaring her "righteous among nations".

But there is also an irony in the context within which Harand fought Nazism, namely the Austrian Ständestaat, sometimes referred to as "Austrofascist." After World War II its history disappeared behind a shroud of willful ignorance and vilification. The leading Austrian parties ÖVP and SPÖ either had little interest in problematizing the non-democratic nature of this regime, or of showing that despite this non-democratic nature (in which Social Democrats were denied a role), there was room for opposition to Anti-Semitism. In short, Harand and her movement did not fit into the governing narratives of the postwar years.

Readers of this volume may still wonder how so incessantly active a politician and publicist as Harand could fall into obscurity after 1945. She wrote next to nothing and lived a quiet life with her husband Frank in their New York apartment. Perhaps she lacked a cause that could inspire passion - though of course battles against racism were becoming a mass movement in the United States during her time. Perhaps she also lacked the inspiration supplied by Moritz Zalman: in the view of the authors of this volume his "organizational genius" complemented her "genius for feeling." Harand also admitted to being plagued by survivor's guilt.

This highly informative and often gripping volume features a CD with a Harand speech of 1937 and an interview from three decades later. We hear her voice shaking with barely contained rage as she recalls the successes of politics of hatred. The volume's authors ask about the "intellectual roots" of her ideas, but perhaps the question is badly posed. What spurred her activism was not new "ideas." The ideas she espoused - love and truth - are timeless. What drove her rather was solidarity: with her favourite Aunt, who married a Jew; with her husband's friend who suffered discrimination in the army as a Jew, and then with the tireless and selfless Jew Moritz Zalman. It was Zalman who cured her of her own anti-Semitism. At some point after their first meeting she suddenly realized that she had considered his being Jewish impossible, because he had refused to take money for his services from impoverished pensioners. This realization so appalled her that she vowed to devote herself to the battle against anti-Semitism.

When asked decades later what one might do to "further brotherhood" she responded: "one must answer every lie with the truth." In the 1930s, for example, she and her collaborators developed a series of stamps that provided simple and true information on Jews like Heinrich Heine, or Walther Rathenau. In 1936 German sailors managed to smuggle these stamps into Germany, and pasted some in the halls of the exhibition: "Der Ewige Jude".

Among the stamps displayed in this book is one of Harand herself. To the uninitiated she might seem one of the glamour stars of 1930s film: hair tossed back and an expression of studied insouciance on her face. This appealing image is framed by her league's slogan: "Racial hatred disgraces our Christianity." But why were the words themselves not sufficient? Why make a cult of personality? When interviewed from American exile Harand seemed pained by her organization's undemocratic front, and addressed the matter without the interviewer having to prod her: "In a democracy you cannot understand that sometimes you have to deviate a little bit from democracy." Her entire board of managers, she recalled, had insisted that one needed a Harand-movement to fight a Hitler-movement.

One puts this book down with profound gratitude for the efforts that went into writing it. Truly a team was required. But one also wonders: why should we read Irene Harand today? Is she of interest to more than antiquarians or Austrian Catholics seeking consolation for an otherwise unredeeming past? The "ultimate resonance" of her ideas would seem to elude conventional historical analysis. Her story, however, challenges easy assumptions about the political landscape of the 1930s. She reminds us of the peculiarly unsettled nature of interwar politics, a waystation between monarchy and welfare state. For many of Hitler's opponents democracy itself seemed outmoded, because it had failed to stem Nazism. Harand and her colleagues for example strove to imagine forms of opposition beyond democracy. Theirs was a world of odd disjunctures, where leading democrats (present and future) appeased National Socialists, but where those who rejected racism, and wrote of the Jewish people in a way we would presently find acceptable, sought the refuge of "Christian Corporatism." Speaking from American exile Harand called her years of work under the regimes of Dollfuss and Schuschnigg a "time of freedom." Words like "Austro-fascism" or "clerical fascism" may hide more about this past than they reveal. Beyond the inspiration one might draw from her self-sacrifice, Harand is thus worth reading because she fits into none of our existing schemes for interpreting interwar Central Europe, and forces us to rethink them.