Andrew Willard Jones: Before Church and State. A Study of Social Order in the Sacramental Kingdom of St. Louis IX, Steubenville: Emmaus Academic 2017 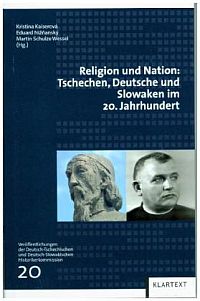 This volume considers the complex relation between religion and nation in East Central Europe. Nationalism, Martin Schulze Wessel notes in a thought-provoking introduction, is often considered a substitute religion, making national and religious forces notoriously difficult to disentangle. The volume keys us in on the endless variety of combinations and also limitless surprises in this often tense but often mutually supportive relation, mocking all attempts at easy generalization.

In an essay on the Slovak political elite, Roman Holec notes that Protestant clergy took leading roles in creating the foundations for nationhood among Catholic Slovaks, above all through language. Within the population as a whole, Lutheran Slovaks were far less likely to succumb to Magyarizing tendencies than Catholics, and the Slovak Catholic church finally became 'national' through a contest with minority protestants; one senses that Catholic clergymen who once flirted with Magyardom eagerly took advantage of the Slovak nationalism in order to wipe away traces of an embarrassing past. Nationalism proved a dynamic, highly complex set of interrelationships. The upshot was to drive Slovaks further from the Czechs, who were represented as hopelessly secular.

Eduard Nižňanský asks whether we can explain the behaviour of the priest politician Jozef Tiso via his pre-existing ideology. Tiso's ideas seem pretty standard for a priest from this region: for him Catholicism was the one pure and unfalsified religion and promised political balance otherwise impossible to achieve; liberalism by contrast belonged to the past because freedom of the individual subverted the general good. That a man with such unremarkable views wound up suppressing political parties and the democratic system is not surprising; much more puzzling is that a traditional Catholic like Tiso would emerge as leader of a fully fascist system governed according to the leadership principle. Perhaps he transcended or simply ignored his earlier self; expressions of racist sentiment made during the war - for example that it was 'Christian' for the Slovak people to rid itself of its eternal enemy - do not make reference to scripture or Catholic theology.

Jörg Osterloh provides us a revealing, well-documented essay on the position of Jews in the Habsburg lands. The Austrian constitution of 1867 had accorded them full civil rights, but also said that all ethnic groups (Volksstämme) had the right to practice their nationality and language. Jews were not recognized as such a group; in 1909 the Ministry of the Interior determined that they did not live in a specified territory (geschlossene Ansiedlung) and did not encompass all layers of society in ethnic unity. Jews were simply a religious community and could be understood only as part of some other recognized Volksstamm, something the increasingly virulent German and Czech anti-Semitism made less and less conceivable.

Martin J. Wein investigates Jewish support for Czechoslovakia, a myth that Tomáš G. Masaryk promoted on his First World War tour of the United States. The founder president appears opportunistic, happy to exploit the reputation he won during the Hilsner affair, and happy about supposed Jewish influence in the 'international press'. But on balance Masaryk probably overstated the support Czechoslovakia enjoyed among Jews.

Such was the faith of the Czechoslovak Communist part in History that it included the priest and heretic Jan Hus among its pantheon of heroes. This is one of the unlikely findings made by Jan Randák. Czech communists portrayed Hus as a crystallization point for the strivings of a particular historical epoch, anti-German and a friend of ordinary Czechs. Unlike other reformers he called for revolution, and as a sign of his own extraordinary consciousness refused to recant his views even when threatened with death.

Tobias Weger considers the places associated with Czech reformer Comenius, who was also a figure of world history. Prague anthropologist Jindřich Matiegka successfully located Comenius's bones in 1929 at Naarden, after which the Dutch and Czech states cooperated in building a chapel dedicated to Comenius's memory. After the Second World War both Czech Communist (Zdeněk Nejedlý) and anti-communist (Václav Havel) figures declared allegiance to Comenius's intellectual legacy. Leszno in Poland, where Comenius taught after expulsion from Bohemia, also belonged at times to Prussia, and therefore the city has produced both German and Polish claims upon this famous Czech.

Katharina Kunter determines that the miniscule Czech protestant community was overrepresented in Charter 77: over 17 percent of the original signers were Protestant pastors or laypersons, compared with 2 percent of the entire population. She traces this engagement to the liberal understanding of human rights among the Bohemian brethren, but also to the democratic heritage of Tomáš G. Masaryk. How Czech Protestants managed to put behind them the legacy of theologian and Lenin Prize laureate Josef L. Hromádka, enthusiastic for state socialism even after the crushing of the Hungarian revolution, is not clear.

As a whole the volume renders extraordinary insight both into research (Holec alone uses dozens of fascinating sources) but also the perceptions of communities little known to historians beyond the Slavic speaking countries.