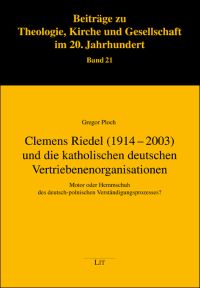 Based upon his 2007 dissertation for the Catholic theological faculty at the University of Vienna, Gregor Ploch's new book compares how the Polish clergy and German expellee Catholic and political leaders grappled with the question of clerical jurisdiction in the ethnically cleansed former German territories of western and northern Poland. A product of in-depth research in church archives across Poland and western Germany, it sheds light on attempts from both sides to influence the Papacy's position on the issue of whether the dioceses of the former German Eastern Territories should remain under the jurisdiction of exiled German bishops or be transferred to Polish ecclesiastical control. In so doing, it offers valuable evidence that political considerations were more influential than previously acknowledged in motivating attempts at reconciliation between the Polish and German bishops at the Second Vatican Council in 1965.

On the surface, it could seem as though the question of clerical jurisdiction in the former German Eastern Territories was immaterial. Throughout the 1950s and 1960s, congregations in most of these churches were composed of Polish-speaking immigrants from areas that had been inside the borders of interwar Poland, and Polish apostolic administrators functioned as their Ersatz-bishops. Apart from the so-called "autochthonous" population of Upper Silesia (an indigenous minority the regime had retained), scant few in the new Catholic congregations, much less the clergy, had memory of the traditions which dominated in the formerly German churches before 1945. At the same time, much as German expellee bishops asserted their legal right to keep their old titles, clergy exiled west of the Oder and Neisse rivers sustained virtually no contact with the physical spaces of their former sees, and their flocks were dispersed across East and West Germany, divided by the Iron Curtain, and (despite the circulation of pastoral letters) essentially cut off from their former pastors.

The question of jurisdiction was therefore almost entirely political, and, as Ploch demonstrates, tied to the highest levels of international diplomacy. If German bishops could still claim to be the spiritual fathers of dioceses they had not seen in years, even decades, then somehow the German political claim to the lost territories might yet retain some strength. As Ploch summarizes, political "representatives of the expellees asserted that the Pope would politically legitimize the events of the Expulsion [of Germans] if he were to fulfill the wish of the Polish episcopacy to recognize Polish religious administrators as the rightful clerisy of the former German lands, because he would be creating accomplished facts with the formation of Polish dioceses" (13). A different take was presented to Rome by religious representatives of the expellees: the expellees could not bear to lose their spiritual homeland as they had their physical one; they had to retain the archbishopric of Breslau in Germany. Even in the late 1960s, expellee Catholic representatives kept up pressure on the Vatican, until finally in 1972 the Pope dissolved the German bishoprics and, in their place, appointed apostolic administrators, who retained seats on the German Catholic Bishops' Conference until 1998.

Meanwhile, the Polish clergy asserted that, if they failed to secure formal control of the new regions they were striving hard to integrate into the national church, they would lose political traction in an already oppressive environment. In 1962 alone, the communists took 171 measures against the Catholic church. If the regime (rather than the church) should somehow manage to achieve an understanding with the Papacy and secure Polish control of the former German dioceses, Poland's Catholic hierarchs declared that the communists would thereby succeed in weakening church authority and win greater public approval. Of course, as Ploch admits, the Pope would not have taken any action without first consulting the Polish bishops (62-63), so it is unclear to what extent the church's proclamation of apparently baseless fears convinced anyone of its position.

The expellee lay activist Clemens von Riedel emerges in Ploch's account as a case study. Trained as a master baker in Breslau, Riedel became a leading expellee politician (a member of the Bundestag, 1957-1972 and European Parliament, 1965-1973), a regular advisor to leading politicians (such as the Federal Minister for Expellees, Refugees, and War-Damaged), and a leading member of numerous expellee Catholic organizations, among them an advisory council to expellee bishops at the German Bishops' Conference and the central organ of Catholic expellee groups (which he organized and led as speaker). In these and other responsibilities, Riedel influenced the German Catholic expellee leadership's approach toward the Polish Catholic clergy and the Papacy. Though as late as 1990 he held firm to his position that expellees had a right to return to the lost territories in Poland, he also engaged in dialogue with Polish clerical representatives. From the Polish side, important figures in Ploch's account include Polish primate Stefan Cardinal Wyszyński and leading Wrocław cleric (later Archbishop) Bolesław Kominek, an Upper Silesian who personally initiated the bishops' letters at the Second Vatican Council in 1965.

Ultimately, Ploch features Kominek's 1965 initiation of correspondence as more than just a conciliatory gesture: it was a political attempt to convince the German bishops to recognize Polish jurisdiction in the former German territories. Riedel likewise appears as a contradictory figure, pressing for border revision and Heimkehr at the same time that he sought to lessen political radicalization and emphasize Christian understanding with Poland. Thus, Ploch concludes, "the question of whether the two sides were led by pastoral or political motives can be answered with 'both'" (261).

In a further section, Ploch taps into interviews and his own reminiscences as a native Upper Silesian to detail the Upper Silesian experience of migration to West Germany in the 1970s and 1980s. A propaganda battle surrounded them from both sides: whereas expellee leaders categorized them as Germans, Polish bishops declared that they were not. As a result, Ploch concludes, "migrants felt membership in both homelands while at the same time distancing themselves from them" (215). Their identities became locked between Germany and Poland, and a few even chose to return to Upper Silesia, though lengthy exposure to conditions in Poland often led them to go back to Germany.

Ploch's study incorporates a great deal of archival material to make sense of a complicated story involving a wide cast of men. Perhaps as a result, the narrative is often repetitive and struggles to sustain chronological or thematic coherence. It can be hard to ascertain what happened when, by whom, and to what end, such that the reader can become lost in the details. Additionally, Ploch could have more specifically asserted from the outset that this is a work of political, top-down history. That is to say, because his sources seldom address how ordinary Catholic expellees thought about their former churches and religious practices, it is problematic to assume that they were greatly concerned about whether expellee religious hierarchs retained their old titles, or even that they desired to return to their lost Heimat at all. A perusal of expellee correspondence and priests' musings in Catholic pastoral letters, for example, reveals next to no interest in (or even mention of) the question of German episcopal authority in the lost territories. By contrast, expellee priests and their flocks were obsessed with commemorating lost traditions, reminiscing about past celebrations, and inquiring after the whereabouts and condition of missing members of the congregation.

On the level of high politics, however, Ploch succeeds in helping to sharpen the picture of what was at stake in the minds of German and Polish political and religious leaders when considering what might at first glance appear to be a trifling question of episcopal authority. As he reveals, the battle to influence papal decisions about jurisdiction in the former German Eastern Territories even had the capacity to influence the course of German-Polish reconciliation after World War II.