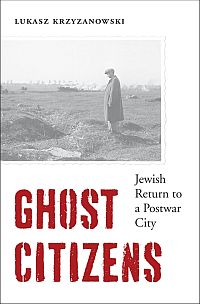 "Shortly after liberation, Jewish survivors returned to their native villages, towns, and cities, but no one awaited them; no relatives, friends, or neighbors were there to greet them." And their former homes "were occupied by others and no longer belonged to them." [1] An increasing library of scholarship has documented the unthinkable yet sadly human tragedy that befell Holocaust survivors in immediate postwar Poland, when a great many of their non-Jewish neighbors met them with hatred, even violence, rather than Christian compassion or pity. While Jan Gross's graphic 2006 investigation of the 1946 Kielce pogrom triggered extensive scholarly and popular discussions [2], Lucjan Dobroszycki's 1994 classic (quoted above) laid the groundwork for such research with its sweeping analysis of the circa 230,000 Jews across immediate postwar Poland, of whom only 89,000 remained by March 1947 and 5-7,000 after the antisemitic persecution of 1968/69. [3] Like Dobroszycki, many researchers were survivors themselves: Szimon Redlich wrote about his formative years in the short-lived Łódź community, [4] while Jakob Egit revisited his experiences as the leader of a community in Lower Silesia, where chaos amid the expulsion of Germans temporarily spared Jews from persecution on the scale of that in the Polish heartland. [5] Adding to this plethora of case studies was Lukasz Krzyzanowski's 2018 article on survivors in Kalisz. [6] Drawing upon archival material and interviews, he humanized their fleeting attempts to make lives in the trauma-laden spaces that had been their home and (thanks to their neighbors) never could be again.

This English translation of Krzyzanowskis 2016 monograph [7] is fresh and timely in two ways. First, Krzyzanowski exploits his distinctive background as the descendent of non-Jewish neighbors, rather than survivors, to gain access to oral testimonies across the local terrain where he grew up: Radom, a central Polish industrial town typical for its size, its rich Jewish past, and the starkness of that past's absence in the present. One-third of the town's 90,000 inhabitants were Jewish in 1939, most of them concentrated in the historic core where the Nazis established a ghetto. Second, Krzyzanowski has tenaciously gathered testimonies and widely dispersed records with a sense of urgency before witnesses are lost forever. "Most of their stories have not been recorded in history as anything special," he reflects. "They were ordinary people living in extraordinary times, whose fates, I am convinced, are worthy of being told. Studying the fates of ordinary people provides better insight into the wider social processes and daily life of a society than does focusing on privileged and exceptional individuals" (3). Informed by the larger context in which his story takes place, Krzyzanowski delivers an evenhanded account of the bitter tragedy that befell his hometown's Holocaust survivors. Aided by formal and informal interviews, Krzyzanowski deciphers IPN security archives in Warsaw, Kielce, Radom, and Gdańsk, survivor repositories in the United States, and the uniquely intact records of Radom's District Jewish Committee (Okręgowy Komitet Żydowi, OKŻ). While most OKŻ files vanished after 1950, the Radom collection survived by chance, "packed in three cabinets, two chests, and several sealed parcels" in a remote site at the edge of town (4). When students from a nearby school started using Hebrew-language archival materials as scrap paper, the secret police seized what was left in 1974 and (finding it less than useful) put it in the state archive.

In tune with preceding scholarship, Krzyzanowski's four terse chapters retrace how a survivor community largely dissolved due to persecution from Polish neighbors and Communist authorities. Surveying the context of increasing antisemitism, nationalism, and segregation before 1939, the first chapter notes that Poles active in "anti-Jewish agitation, on picket lines outside Jewish shops, and in beatings were definitely a minority," but so, too, were those who actively defended Jews (18). Most Christian neighbors were simply passive, sustaining professional interchange alongside a general dislike of Jews. A surviving testimony from a prewar Jewish city council member articulates how this latent hatred exploded under Nazi rule, when Polish inhabitants "began looting, collecting the most beautiful furniture, objects, bedding, jewelry. The local population immediately began demonstrating its hatred of Jews. Children would run after a Jew and call out, 'Jude, Jude'" (21). Drawing from Polish accounts and a wealth of scholarship on other cases, Krzyzanowski concludes that Poles were not only fully aware of "the annihilation of the Radom Jews" but that this compliance also shaped their bearing toward Jews after the Holocaust (29).

Compared to the often happy accounts of Poles who returned home to find their houses waiting with loved ones inside, Jews came back to find Radom "a social void, even if they recognized the walls and streets of their native city" (55). In a climate of unemployment, criminality, and scarcity, "the survivors' joy at liberation and hopes of finding their loved ones and rebuilding" soon "collided with a wall of human indifference, dislike, and often enmity. Disillusionment quickly gave way to fear" (61) - or even violence, as the second chapter shows. Throughout the first months after liberation, Jews- as "the most defenseless and most vulnerable inhabitants in the postwar city"- suffered violence that was abetted by local authorities and Catholic clergy (79). Cows grazed on the Jewish cemetery, and Poles often destroyed the gravestones of their Jewish victims the very night after a body was interred.

While most Jews had already fled in August 1945 in response to hateful flyers, as the third chapter recounts, Radom's heavily armed remnant banded together as "ghost citizens - physically present, but socially nonexistent for the majority of the city's inhabitants. At the same time, in their closed communities the survivors undertook efforts to rebuild life under new conditions, in a reality whose every aspect was marked by the Holocaust" (135-136). The unveiling of a Holocaust monument in August 1950, comprised of rubble from Jewish tombstones on the site of the former synagogue, marked "the symbolic conclusion" of Jewish life in Radom (203).

As it contrasts postwar legal codes with actual behaviors, the fourth chapter offers repeated cases wherein Jews surrendered property claims as the "price" of attempting a postwar life in Poland, while the state seized enterprises classified as "post-Jewish" (233, 241). Survivors often had to buy back old personal effects "such as a mother's sugar bowl" as dear heirlooms they took with them (255). The result, Krzyzanowski concludes, is that "the transfer of Jewish property into non-Jewish hands and the surrender of private property to the state," which had started "in the period of German occupation," seamlessly "continued afterward" (264).

Through his intimate reconstruction of complex human lives in post-Holocaust Radom, Krzyzanowski not only reinforces an incontrovertible scholarly consensus but also delivers a hard-hitting admonition to his fellow Poles to wake up to "the bitter fact that they live in a post-genocidal land," in which the "heavy moral baggage" of complicity in the Holocaust yielded "indifference, dislike, enmity, and outright violence" against its few survivors (266-267). Although the text has been deftly translated, the citations are hard to follow, as Harvard University Press has once again mandated endnotes in shortened form without a bibliography. Given its scholarly audience, one wishes the press would allow bibliographies in its books. Despite this deficiency, Ghost Citizens will hopefully inspire other dedicated scholars to research the "ghosts" who left few documents, but whose inclusion in local history deeply informs the larger context of how to comprehend victims and perpetrators after genocide.

[1] Lucjan Dobroszycki: Survivors of the Holocaust in Poland, Armonk 1994, 5.

[5] Jakob Egit: Grand Illusion, Toronto 1991; Agnieszka Ilwicka assesses Egit in: Grand Illusion? The Phenomenon of Jewish Life in Poland after the Holocaust in Lower Silesia, in: Person and Challenges 4 (2014), 2, 97-125.

[6] Lukasz Krzyzanowski: An Ordinary Polish Town: The Homecoming of Holocaust Survivors to Kalisz in the Immediate Aftermath of the War, in: European History Quarterly 48 (2018), 1, 92-112.