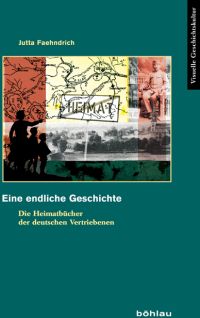 Though thousands of Heimat books have appeared in Germany since the dawn of the twentieth century, these valuable primary sources have found scarce attention in scholarship. Such a lacuna is particularly surprising in the case of expellee Heimat books, in which millions of Germans expelled from Eastern Europe in the wake of World War II commemorated their lost homeland. Why have so few scholars sought to learn what they can reveal about Germany's turbulent twentieth century? Relatively hard to find, they can seem devoted to remote, trivial, forgotten places. Yet in the end, perhaps they are overlooked because we don't want to hear what they have to say. Loaded with selective memories seldom acknowledging German guilt in Nazi crimes, the contorted nostalgia of Heimat books can prove an awkward vantage point from which to produce a limpid historical narrative. In her dissertation from the University of Erfurt, Jutta Faehndrich catalogues, analyzes, and grapples with 287 Heimat books written by expellees from diverse origins in the Sudetenland, Oder-Neisse territories, and scattered settlements across Southeastern Europe. An exhaustive review quantified through computer spreadsheets, this work proffers data that will be useful to scholars for years to come. At the same time, Faehndrich, herself descended from Lower Silesian expellees, seeks to approach Heimat books from a critical distance. Not least because of its extensive bibliography of Heimat books, her sensitive and painstaking analysis provides a new reference point for the future study of twentieth-century German cultural history and the history of memory and nostalgia

Faehndrich's work enters into a growing scholarship on the political and cultural history of expellees. Integrating previous contributions, Faehndrich introduces Heimat books as a "mass phenomenon", a diverse corpus of cultural history produced by grassroots actors for local audiences, rather than from the outside looking in (as was often the case for tourist guides or picture books). While most of the book seeks to categorize Heimat books according to varied criteria (region, subject area, etc.), it also poses a series of important questions.

To begin, Faehndrich asks "what is a Heimat book?" The answer: a detailed picture of "a radius of action of daily life between school, work, and recreation" (7). It was a genre which first peaked in the 1920s as local accounts whose authors sought to document the local geography, history, social life, economy, and dialect. After the expulsion, the writing of Heimat books became communal acts of self-description (Selbstdarstellung), in which former occupants collaborated to preserve what they remembered of the sites they had lost. Drawing heavily on the theories of Jan Assmann, Faehndrich poses Heimat books as the bridge between communicative memory (in which expellees with strong adult memories of the Heimat recorded their lived experiences) and cultural memory (the museum-like storage and codification of canonized narrations once those with lived experiences have died). This trend is substantiated in the author's observation that, by the 1980s, Heimat books were increasingly dependent on documentary materials (such as reproduced primary sources, building inventories, lists of former residents, excerpts from address books) rather than firsthand data (anecdotes, the former economic life and religious dynamic) (118).

Perhaps Faehndrich's most important observation is that Heimat books constituted a grassroots phenomenon often at odds with the intentions of the expellee political leadership: "In contrast to the norm among most of the expellee publications, most of the authors were neither functionaries or even scholars; instead, everyday former residents concerned with their place or locale wrote their Heimat book together" (13). In her view, once the reader moves past a Heimat book's first pages (often opening diatribes by expellee functionaries) one tends to find the "apolitical Heimweh" common outside the narrow confines of expellee organizations (231). In effect, she contends, the notion of a unified, revanchist "expellee" culture was a construct of the media.

Finally, there is the question of "what if any part of the cultural heritage of the former German East has remained after the expulsion" (5). In Faehndrich's assessment, Heimat books have bequeathed a "canonized memory" for the Erlebnisgeneration: "The crux of the matter is that the works only targeted the expellees of the present day at the time of publication. Although a Heimat book was designated as a legacy for the future, it was in fact only written for the present" (112). As a result, it is hard to transport their meanings into the present, especially due to the problematic profiles of many of the authors, themselves complicit in the Nazi regime. It is also hard to access the meaning behind casually identified locales, personalities, and stories now alien to the contemporary reader.

Throughout the monograph, the Heimat books take on a personality of their own, regularly in conflict with the author herself. As she observes, "above all, I came to know the Heimat book as an extremely multifaceted, protean, at times even anarchic phenomenon, which is even more diverse than the various historical landscapes presented within" (5). Perhaps as a result, it seems as though the vast material in the Heimat books at times overwhelms the author: the crispness of her argument is lost through excessive repetition of the same claims, and temporal reference points can become confused, at times to the point of contradicting her claims. In the midst of her useful assessment of "blind spots" in Heimat book depictions of history, Faehndrich includes "the expulsion" alongside the Holocaust and World War II (15), and emphasizes later on that, in early postwar Heimat books, World War II, the Soviet occupation, and the expulsion routinely received a mere eight pages. Yet an undated table displays "expulsion" as a leading theme in the Heimat books, up to one-quarter of their contents (124). Presumably, these statistics either dated from a much later time or represented an overall average derived from all of the Heimat books treated in the monograph, in which case the predominance of more recent Heimat books in the analysis made the percentage on the chart appear misleading. Likewise, while emphasizing the novelty of fresh, contemporary images from lost Heimat sites after the eastern treaties of the early 1970s, the author features an image of Crossen (Krosno Odrzańskie) from 1959 in a 1963 Heimat book, demonstrating that such images appeared beforehand (in fact, not irregularly).

It is exceedingly difficult to reach black-and-white conclusions from a source base as elusive as Heimat books. As Faehndrich comments, "what we get to read in the Heimat book is only the final result of tough negotiations for a consensus and certainly power relations as well, not least the financial ones" (242). This brings an important caveat to mind: the need to remember that Heimat books themselves were also not representative of the expellees; though Faehndrich notes that Heimat books did not represent what many expellees believed (and not just politically radical leaders), she also refers to them as communal enterprises. And if this is so, then negative Sudeten German memories of Czechs in her opening should still give one pause: if the Heimweh in the Heimat books was "apolitical," the lack of attention to German crimes such as the Holocaust and at times antagonistic attitude toward Czechs, Poles, or Russians can still make it distasteful to say the least. Yet it was not the author's purpose here to make a broader claim about how expellees saw themselves. She has devoted considerable energy toward assessing the Heimat books of the expellees, and her success here will hopefully inspire further application of Heimat books in scholarship: a slippery but rich source for cultural history.