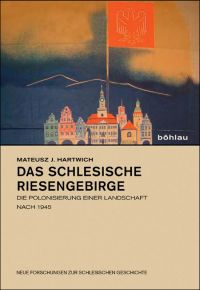 Although barely higher than the foothills of the Alps, the terrain of the so-called "Giant Mountains" (Riesengebirge in German, Karkonosze in Polish) has long been a haven for tourists. Before World War II, when most of this eastern German borderland's population considered itself German (also on the Czechoslovak side), tourists from Germany, Czechoslovakia, Poland, Russia, and even further afield flocked to enjoy the spas, hiking trails, and general relief the region offered from the growing industrial metropolises such as Berlin, St. Petersburg, and Breslau. In his extensively researched monograph (based on his dissertation under Karl Schlögel at the European Viadrina University in Frankfurt/Oder), Mateusz Hartwich explores the role of tourism in the Riesengebirge region after virtually its entire population was expelled in the aftermath of World War II. As an ethnically cleansed borderland (now in Poland straddling the Czech border), the Riesengebirge region represents an ideal venue in which to examine the long-term cultural, political, and economic effects of forced migration on both expelled and newly resident populations, as well as on the landscapes themselves.

In recent years, Hartwich has published enticing peer-reviewed articles and review essays that have made him an authority on the Riesengebirge and the history of tourism in general. This monograph is therefore both timely and long awaited. It brings together an impressive array of archival and published primary sources (including maps, postcards, brochures, and travel guides) that allows him to offer a compelling thesis: in the aftermath of forced migration, tourism became a medium through which Polish leaders and settlers interpreted and adopted a foreign landscape. Indeed, the more Polish residents got involved in the tourism process, the more Hartwich finds that they began to feel at home.

While Hartwich's book applies theoretical approaches to space and memory (Pierre Nora's lieux de mémoire, among others), it is particularly noteworthy to observe where he fits into the current historiography on forced migration and its aftermath in the German-Polish borderlands. Valuable urban studies have recently demonstrated how the Aneignungsprozess, or process of taking possession, operated in formerly German, now Polish cities. Gregor Thum [1], Jan Musekamp [2], and Jacek Friedrich [3] have uncovered how the Polish government and Polish settlers took possession of their new cities in uncertain political times - polonising names and streets, reinventing the city's history to overlook much of its German past, and in general seeking to reject, accept, or recode the cultural heritage and architectural remains of war-ravaged, formerly German spaces so they could feel at home. Adding to this conversation, Hartwich posits that tourism helped Polish settlers take possession of their new homes in a rural location dominated by imposing natural beauty.

He begins by outlining parallel nationalist movements in the German and Polish tourism industries before 1945. Two core chapters follow. The first, covering the era from 1945-1949, reveals that (unlike destroyed cities such as Breslau) the Riesengebirge region could appear truly attractive to incoming settlers. Hirschberg (Jelenia Góra) was an intact town in which flowerbeds were still in bloom. As one settler wrote, the city "appeared to us like a paradise after the years of occupation" (49). However, the chaotic arrival and departure of adventurers, returning Germans who were later deported, and destitute Polish settlers quickly left the region plundered, damaged, and starting to decay. Polish tourist organisations, such as the state Orbis company, sought to take control of former German tourist structures, only to find them pillaged or burned by 1947. This era also witnessed the early, often farfetched attempts by Polish writers such as Józef Sykulski to polonise the region's history and traditions, to the point that even the German mountain spirit Rübezahl was said to somehow have Slavic roots. Official attempts to "recode" the region's names into Polish and eliminate German inscriptions found popular appeal, though settlers grew apathetic about the naming process when it became clear that the often spontaneous names they had devised were generally rejected by the state; the regime's lack of time to formulate official names even meant that some sites remained nameless as late as 1949 (82, 90).

The second core chapter seeks to assess how tourism influenced the "everyday life" of the settler population 1954-1970. For Hartwich, a "gradual process of cultural, economic, and social adoption" caused settlers to feel that the surrounding "landscapes of the Riesengebirge [had] become less and less 'foreign'" (187). Reforms in the tourist industry exposed locals to the German past of the region, and Rübezahl and Gerhart Hauptmann were integrated as components of local history, facilitating a greater sense of rootedness. Most of the time, Hartwich does not move beyond political leaders, journalists, and famous tourists to get at grassroots interchange; public figures still dominate most of the chapter and the study overall. Nevertheless, this choice of focus does not detract from the overall value of the research.

In the first place, the author's emphasis on public figures and institutions offers a helpful overview of the activities of Polish tourist organisations throughout the era of the "Thaw" in global bipolar relations. Little investment entered the region initially, and the few preexisting hiking paths that were maintained retained a shallow relationship to history (the paths leading to so-called medieval Polish "Piast castles" and the marching route of the 2nd Polish army in 1945). Impetus for change came when visitors witnessed the devastation of the local infrastructure. Due to a lack of proper accommodations, many GDR visitors went home dissatisfied, while Czechs often brought tents. Increased investment attempted to lure more tourist trade, yet private initiatives and even general reform were usually blocked, especially after West German tourism was severely restricted in 1960. As Hartwich observes, the communist state thus failed to make foreign tourism an economically relevant source of revenue, due to "logistical difficulties, black market trade, and the incapacity to establish a tourist infrastructure up to even half of international standards" (121).

Additionally, Hartwich usefully traces the chronology of tourist traffic. Particularly fascinating was the circumstance by the early 1960s that, due to restrictions on West German travel to Poland and the GDR, East Germans and West Germans who had once been neighbours in Silesia found it easiest to meet at the Polish-Czechoslovak border along the ridge of the Riesengebirge (173). An all-too-brief Ausblick at the end of the work takes note that the influx of tourists to the region in the 1970s accelerated previous trends of interchange and the settlers' sense of taking possession of their new homeland.

The last major chapter shifts radically from the Polish perspective to the West German expellees themselves, notably the memory culture that thrived in their communities over the early decades of their exile. Here, Hartwich enters an entirely different historiographic milieu, in which the cultural and political implications of expellee memories, commemorative practices, and travel experiences have been treated by Andrew Demshuk, Jutta Faehndrich, Ulrike Frede, Christian Lotz, and Dietmar Sauermann, among others. Drawing on this scholarship, Hartwich reiterates the view that expellees increasingly differentiated between the "shocking" imagery of the "geographic space under foreign administration" (197) (which they witnessed in travel experiences) and the memories of Heimat they still relished in old picture books and postcards.

Although at times the book's sections could have benefitted from a stronger overarching analytical unity, any reservations are minor when compared to the impressive body of research Hartwich has synthesised and assessed from so many archives, periodicals, and rare books. At the opening of his study, Hartwich expresses the hope that his transnational study will "enrich the methods and ways in which Polish history is written" and spark new German interest, not just in a largely forgotten former German territory, but also in the region's important role as a transnational meeting place at the heart of Europe (14-15). This book comes highly recommended to specialists studying the aftermath of population upheaval in European and even global borderlands; and it is hoped that it will gain significant attention from the broader public as well.