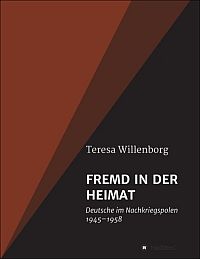 Although Teresa Willenborg's dissertation might be overlooked by experts in the field due to its appearance with a minor, non-academic publisher, its analysis of the German minority in postwar Lower Silesia merits attention at the very least for its distinctive source base. In addition to her research in the German Red Cross archives, Polish archives ranging from Warsaw's Archive of New Acts (AAN) and Institute of National Memory (IPN) to smaller archives such as the Wałbrzych branch in the village of Boguszów, and Heimat periodicals (notably the Waldenburger Heimatbote), Willenborg also created a personal archive based upon collections and interviews from former members of Poland's German minority, Polish communist party officials, and even the son of former head-of-state Władysław Gomułka. She both cites and builds upon a long list of scholars who have assessed the sweeping population shifts in Lower Silesia, including Beata Halicka, Andreas Hofmann, John Kulczycki, Beata Ociepka, Grzegorz Strauchold, and Gregor Thum, though Mateusz Hartwich's research on the postwar remaking of the Lower Silesian Riesengebirge region could have further enhanced the work. Given the crowded nature of the field and plethora of scholars specifically devoted to the German minority, Willenborg faces a challenge from the outset in offering her fellow experts something new.

As one of the regions of postwar Europe that underwent the most demographic upheaval, Lower Silesia certainly merits such scholarly attention. Few indigenous inhabitants remained after 1945, most of them specialists retained to operate infrastructure, industries, and mining operations. Willenborg's story of this German-speaking minority, persecuted by the homogenizing communist/nationalist state, evinces three major trends. Firstly, in keeping with her title, the author explores the "foreignness in the Heimat: " as the intimate spaces around them were Polonized for the new national host culture and made socialist through industrialization and a new monumental topography, the German minority felt alienated from their homeland and ultimately desired to emigrate (12, 206). Secondly, Willenborg emphasizes the sheer heterogeneity of the Polish settler population, which heralded from every region of interwar Poland, many with wartime experiences in Germany. Finally, she explores the extent to which, after 1948, the German minority was drawn to socialist rhetoric or identified with the new Polish socialist state (in both cases, they responded with resounding aversion).

After a first, introductory chapter, the author proceeds through six often overlapping chapters, the first two of which retread a context familiar to experts, namely the population politics that saw Lower Silesia become a Polish province. Chapter 4 details "the 'formation' of a new society in Lower Silesia" at the grassroots level (96). After touching on the culture of "plunder" (szaber) that dominated postwar social interaction (in which Germans found themselves at the bottom of the hierarchy), Willenborg explores how Poles who had spent the war in France, Westphalia, the Polish-Ukrainian borderlands, or Polish heartland came to Lower Silesia with radically differing perceptions of the remaining indigenous population; those who had been in the West were, not surprisingly, more well-disposed to treat German-speakers humanely than Poles who had experienced Nazi brutality in Poland and further East. The Polish state's policy of "forced assimilation" sought to homogenize Polish settlers and erase remnants of German culture (112). For Germans, "creeping alienation" from the Heimat proceeded alongside the destruction of German inscriptions, books, monuments, and other traces by the state and settlers (117).

Chapter 5 gives an overview of the creation of socialism in Poland writ-large, with emphasis on the retention of Germans as cheap and skilled labor. Here, case studies show the expropriation process in detail, as German owners were replaced by Poles in the name of socialism and for national purposes (142-143). Given that remaining Germans lost out for national as well as class reasons, it is hardly surprising that, as the sixth chapter details, national pedagogy, culture, and citizenship failed to attract Germans to social participation in Stalinist Poland from 1948 to1956. Given previous and ongoing state-imposed pressures on German schools and culture, as well as sustained anti-Polish sentiments from the Nazi era, Germans refused to join the Polish national community.

The final chapter sketches the initial emigration of Germans to East and especially West Germany from 1948 to 1959. Nearly 300,000 people left the new Polish state-in varying proportions depending on region-as families reunited, imprisoned German soldiers returned, and German-speakers in general were moved out. Willenborg argues that the far larger out-migration after 1970 was primarily "economic" in motivation (201), and one wonders if this means she would claim that the foreignness of Heimat proved a greater factor before 1959, a claim that would be hard to prove. In any event, movements after 1970 might have been touched upon in an afterword, especially statistically, to illustrate how the German minority further evolved.

Treading a field well-worn by other experts, Willenborg is hardly alone in her finding that the Entfremdung Germans felt from their Heimat prompted them to freely emigrate from Poland, nor is this outcome surprising. Nevertheless, her source base offers materials that would be inaccessible to other scholars about how the state and settler populations interacted with the dwindling German minority in a once-German province. Had the author published with a skilled editorial team, her book could have become a key case study. Unfortunately, the book's data is often buried under typographical errors, structural difficulties, and repetitive contextual details known to most specialists. Notwithstanding these caveats, experts on postwar German-Polish relations and postwar Poland's western borderlands should not neglect this study simply because of its unfamiliar imprimatur.