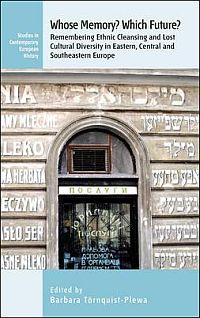 Recent years have witnessed a veritable boom in trans-border memory studies, not least with respect to how Germans and Poles have selectively remembered and commemorated their troubled 20th-century history. [1] On the basis of a 2011-13 Lund University project, Barbara Törnquist-Plewa has edited a collection that explores the aftereffects of ethnic cleansing on communities in postwar Poland, Ukraine, Czechoslovakia, and Yugoslavia with attention to transnational perspectives and post-memory commemoration by successive generations who did not experience the forced migrations in question. Above all, each case analysis features 'how people who took over the places that belonged to the expelled and murdered relate to this experience' (3), both in how they appropriate physical spaces they inherited and (to a lesser extent) identify with those who once lived there. Looking to ceremonies, monuments, speeches, and oral history, each regional chapter explores how vanished groups have been blamed or redeemed, as well as how official and public memory have agreed, vied, and evolved. Unfortunately, the editor concludes, in no instance was reconciliation 'yet at a very advanced stage' (221). The region's political shift to the right has freshly politicized memory debates at the same time that local leaders merely sell a 'redeemed' cosmopolitan memory of the former world to Western politicians and tourists.

Most of the book's findings are permeated with cynicism about official objectives and resilient exclusionary-national mythologies. The one exception may be the editor and Igor Pietraszewski's oral history of elderly residents of Wrocław (Breslau), which asserts that since 1989 Wrocławians have hungered to make meaning from the city's prewar past, perceiving it as an historically multiethnic place whose nationality changes like a chameleon. Of course, it is risky to take the elderly interviewees at their word, because memories change. For instance, how can it be that mention of the lost Polish city of Lwów was always 'snuffed out' under communism (22), when the regime prominently established icons from Lwów (notably the Fredro statue beside the city hall)? A lifetime of political change and shifting memories inevitably color childhood perceptions.

Less optimistic is Tomas Sniegon's assessment of public discussion surrounding four Czech monuments to the massacre of Sudeten Germans in the aftermath of World War II, which failed to offer the 'clearing of conscience' desired by Charter 77 reformists amid a pervasive anti-German sentiment which would seem to continue and gain power from communist-era taboos and martyrology. At each of these rare memorials, officials admitted that Germans could be victims; but this was always in the context of highly political circumstances (such winning Czech admittance to the EU) and failed to express any 'feeling of loss of the Sudeten German fellow citizens' (69-70). In like manner, Eleonora Narvselius argues that, for the Ukrainian majority of L'viv, emphasis on interwar multicultural Lwów is chiefly an international marketing gimmick, a form of political expediency rather than moral obligation, 'a globalized cultural-political parlance suitable for addressing external audiences first and foremost' (76). Polish legacies remain locked into the stereotyped caste of colonial (even bourgeois) oppressor of the exploited and suppressed Ukrainian nation. Hence, although absence is recognized, even the remaining Polish minority is excluded from forging identity in a city whose marketed cosmopolitanism lacks concrete recognition of why it had been multiethnic. As in L'viv and Wrocław, Niklas Bernsand finds that during Chernivtsi's 600th anniversary in 2008 the lost Habsburg multiethnic fabric (celebrated as Bukovinian Tolerance) failed to problematize how this harmony had once flourished between diverse ethnic communities. Emphasis on Romanian music, Polish food, or Jewish history offered 'little extensive reflection or interpretation of what the past might mean for the present-day inhabitants of the city' (136). Here too, absence of moral regret at the loss of most former inhabitants paralleled exploitation of an imagined Habsburg heritage to further political goals, in this case Ukrainian EU integration.

More extreme still is contemporary Zadar in Croatia, where Tea Sindbæk Andersen illustrates the 'story of absence' in which the former Italian majority is largely expunged from press and historical discussion (144). Like the obsession with German oppressors in Wrocław or Polish oppressors in L'viv, commemoration of Italian legacies usually dwells on fascist oppression and war crimes. Not unlike the chameleon narrative for Wrocław or selective cosmopolitanism for L'viv, Zadar's official narrative draws on Roman, Illyrian, Habsburg, Slavic, and other usable cultural contributions without serious moral regret that most of the former population is gone. Memories of the Zaratini 'are drowned under more attractive memories that evoke romantic images of glorious moments in European history - Roman civilization, the golden days of Byzantium, the Venetian Renaissance - for citizens and tourists alike' (153). Darkest of all may be Dragan Nikolić's analysis of the bridge over the Drina in Višegrad - lauded as a UNESCO heritage site valuable for all humanity, but also a site where the town's Bosniak majority was massacred by Serb neighbours in the early 1990s. Particularly disturbing were the author's interviews with far-right demonstrators, who defended 1940s fascists and 1990s war criminals for protecting the nation. Whereas memorials abound to fallen Bosnian Serb soldiers, no monument exists to the fallen Bosniaks apart from the bridge itself, which is already appropriated for more usable memories.

Reflecting upon the diverse findings in this book, it is worth pondering whether it is ever possible to 'master' the traumatic legacies of forced migration. Memory may not be served by a meager collection of half-hearted and hidden memorials to massacred Sudeten Germans, nor is it satisfying to witness commercialization of cosmopolitan nostalgia for outsiders in comfortably homogenous cities like Wrocław or Chernivtsi. The triumphal statue of Stepan Bandera beside the formerly Roman Catholic Habsburg church in Lwów should disturb propagandistic notions that the city has dealt with its past. Nevertheless, even commercialized or deeply circumscribed efforts to grapple with historic forced migrations are welcome if the alternative is silence. Perhaps even problematic gestures can stimulate grassroots discussion about what has been lost in a contemporary Europe (not just Eastern Europe) that too often succumbs to the blinding allure of exclusionary nationalism. Whether in Germany or lands to the East, can the politics of memory ever satisfy after past atrocities? One should strive to counter lapses in the politics of commemoration, but mastery of the past will always be elusive.