Erich S. Gruen: Ethnicity in the Ancient World - Did it Matter? 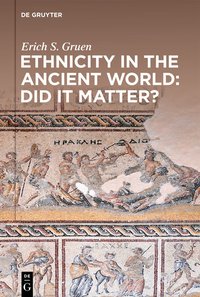 Gruen's latest book is an important work on an essential subject of broad interest. It deals with a range of issues over an extended period: from the 5th century BC until the 2nd century AD and covers classical Greece, Rome and Italy, Jewish culture in the same period, and early Christianity. Like the author's many other works, it argues well-defined answers to lucidly formulated questions. At this point it should be noted that Gruen and I have been good friends for decades, respectfully disagreeing on essential points. That continues to be the case with the publication of the work under review.

As usually happens with titles ending with a question mark, the reader can guess the answer to the question before starting to read the book: the author argues forcefully that ethnicity did not really matter in the ancient world. However, the work has a broader aim: to show that social identity is never determined consistently by descent. The opinion argued throughout the work is that the ancient world was not racist. Ideas were flexible and joint culture, customs, traditions, language and moral principles were deemed more important than genealogy. Identity was elastic. Attitudes towards others were not marked by a complex of collective superiority and inferiority notions "Racism had not yet reared its ugly head" (41).

Before discussing specifics there is one essential point of method to be clarified: the selection of ancient texts. The discussion is based to a large extent on a thorough analysis of a number of major authors, mostly, but not all of them, historians: Herodotus, Polybius, Diodorus, Strabo, Philo, Josephus, and other Jewish and Christian texts. While this may look impeccable as a method, I would argue that covering incidental references in a broader selection of sources will result in a more representative and fuller image of ancient attitudes towards ethnic identity and foreign peoples.

One of the recurrent themes in the book is an insistence on the difference between communities claiming a presumed joint genealogy, an imagined common ancestry on the one hand and those based on joint culture (language, religion, customs, traditions) on the other. Throughout, Gruen insists on the primacy of the latter. That in itself is a matter of debate. However, no less important is the question whether an emphasis on identity marked by culture, joint language and so on, rather than common descent, justifies the conclusion that only the latter and not the former represent prejudice and even racism. Are only presumed ties of genealogy a key to far-going feelings of superiority and inferiority? I have argued that this is not the case in antiquity and the present work has not convinced me that my conclusion should be revised. Ancient texts, I claim, contain numerous negative judgements of "the Other" that are not linked absolutely with joint descent or irreversibility. It is quite possible to regard the essence of a joint identity in cultural terms and matters of lifestyle, rather than common ancestry, and still cherish far-going prejudices towards other peoples.

The first chapter analyzes the concept of "barbarians" and "barbarity" in antiquity. It is argued that the term is not used in an obviously negative sense: it is not in itself a derogatory term. This may often be true, but not invariably so. I claim to have brought together numerous instances that refer to barbarians and barbarity in a clearly disparaging sense. [1] I concluded that there is a marked change in Greek attitudes toward foreigners, especially the Persians, in the course of the fifth century or, rather, in the second half of that century. Thus Thucydides describes the Thracians: "like the bloodiest of the barbarians, being even more so when they have nothing to fear" (Thucydides 7.29). Attitudes hardened towards the end of the fifth century. Euripides attributes to Helen, exiled in Egypt, the words: "A slave am I, the daughter of free parents, for among the barbarians all are slaves except one" (Helen 275-6). Gruen, (12), suggests a different interpretation, a purely political one, for pronouncements such as this which I find hard to accept. Herodotus indeed represents a uniquely broad perspective, unequalled in his own time and certainly unthinkable in the later fifth century. This is not the place to expand on these matters. Suffice it to say that Xenophon several times uses the term "barbarian" in a superlative: e.g. "the most barbarian and farthest removed from Greek customs ..." (An. 5.4.34). In a similar vein: see Aristophanes, Birds, where Poseidon addresses Triballus, a non-Greek deity: 'Ugh! You cursed savage! You are by far the most barbarous of all the gods.' [2] Gruen (24-25) points out that in some cases the derogatory use of the term is ironic or rhetorical, but that does not affect its basic significance. Otherwise it would be meaningless as irony or rhetoric. Let us look at one example of clearly ironic use. Lucian, The Fisherman or the Dead Come to Life writes: "I am a Syrian ... from the banks of the Euphrates. But what of that? I know that some of my opponents here are just as barbarian as I". [3] Here the term is clearly associated with a lack of culture - ironically, but that does not affect the basic meaning of the term.

There are two points of disagreement on the use of "barbarian" and "barbarity" in antiquity between the author and me. First, Gruen regards it as essential whether it was an inherent character trait or a lack of culture that could be repaired. Was barbarity irreversible? It is clear that this is an important question, but it does not affect the basic truth that Greeks (and Romans) regarded it as an essential feature, determining superiority and inferiority of groups of people, whether inborn or not. This is an important question if we want to decide whether the distinction was part of a racist outlook in modern terms. Even so, it does not affect the value judgement of the ancient authors. Barbarians were inferior, Greeks superior. The question how racist this approach was merits a separate discussion. Second, in considering instances and traits of barbarity Gruen regards it as essential whether they apply to all barbarians in general or to specific groups or peoples. Barbarian traits should hold everywhere if they are to be regarded as instances of a racist attitude. E.g. according to Strabo the Iberians are wicked and deceptive by nature (Strabo 3.4.5; see Gruen, 28). However, this applies to the Iberians alone, not to all barbarians. If it is not a general quality of all barbarians, says Gruen, it is not racism. I cannot see this as a valid argument for two reasons. First, racism always targets specific peoples, blacks, Chinese, Jews, and so forth. They are not thought to have common faults; each people is accused of its own, different failures. Second, it is quite possible to recognize a general, negative view among the Greeks of all foreigners, even if this attitude takes many different forms. Not being Greek was a weakness, even if this weakness shows various features among separate peoples.

Chapters 4 and 5 on Rome and Italy are a welcome and lucid description of a complex history. It contains an extensive description of pronouncements of different foreign peoples and an interesting and persuasive analysis of the Social War (91-87 BC). Gruen is entirely convincing when he argues that this was a war not about separation, but about integration. And it is also true that only part of the Italian subject peoples took part in the revolt. Of course it is right to insist on the crucial fact that Rome incorporated foreigners by granting citizenship (87-89). That is how the empire functioned. However, the ultimate aim of this discussion is again to prove that the Romans were not racist, that there was no ethnic bias. Gruen states: "they do not ascribe any of this (the innumerable derogatory and negative descriptions of other peoples) to innate and irreversible traits, to congenital deficiencies that render non-Romans inherently inferior" (87). This is questionable. For instance, "born for slavery" is an expression that occurs more than once with respect to various oriental peoples. [4]

Chapter 6 discusses the Jews in antiquity, in the Old Testament and the Hellenistic period. I am only partly competent to review the subject. Pp. 113-120 deal with the Old Testament. Then pp. 120-130 discuss Ezra - Nehemiah. Gruen's conclusion: ethnic purity is not the issue here. Note, however, a different opinion: Ophir and Rosen-Zvi call it "probably the most xenophobic text in the Hebrew Bible". [5] They state that "foreigners are not banned because of their actions and behaviour; rather their defiling element is somehow embedded in their very existence and transmitted from mothers to offspring. The issue thus seems bio-political in a strict sense" (pp. 61-63). As Ophir and Rosen-Zvi analyse these texts, impurity has become a permanent, irremovable quality, passed on from generation to generation.

Chapter 7 discusses Hellenistic Judaism. Gruen asks whether the Hellenistic Jews conceived of themselves in terms of a lineage, deriving from a common ancestor and linked through a bloodline i.e. ethnicity. Or were they a religion, taking that term in a broad sense to encompass not only belief but also rituals, conventions, and practices? His answer is persuasive: "The culture of the ethnos, not its ethnicity, was paramount" for 2 Maccabees and other works of the period. This is quite convincing, although for Jubilees (2nd century BC?) Ophir and Rosen-Zvi conclude that the work "advocates for a sharp distinction between Israel and all others, expressing radically separatist, even xenophobic, sentiments. This distinction, moreover, is based on a metaphysical conception of Israel's uniqueness originating in creation itself, from which Jubilees traces the imperative to keep the nation pure and separated." (pp. 86-90). I must confess that I am not persuaded by Gruen's argument that the books of Tobit and Judith are marked by irony and humour, but that may be a matter of taste and opinion.

The thorough treatment of individual authors: Herodotus, Polybius, Philo, Josephus, or the analysis of Paul and early Christian authors is extensive. However, the essence of the ideas and my response remain essentially the same.

The subject of the book is enormously important - and complex, for it is a challenge to be lucid about matters that have attracted fierce controversy, contradictory opinions, and emotions in antiquity as well as in modern times. Confusion abounds: Cassius Dio uses ethnos for a Roman province and so do some inscriptions. The Latin word natio is used sometimes for a Roman province as well. Geographical and ethnic names are used inconsistently (Assyria, Syria, Assyrians, Syrians, Palaestina, Palaestini). Judaea can mean various things in different periods, depending on the context - geographical, administrative, ethnic, and social. "Ioudaioi" usually indicates Jews, but it can also cover all the inhabitants of the region named Judaea (Strabo). In other words, in any interpretation, we need to take into account that ideas concerning ethnicity in the Roman Near East were highly flexible.

To quote an anonymous author of a brief article: "The process of using genetics to define 'race' is like slicing soup. You can cut where you want, but the soup stays mixed.' [6] Gruen has made a tremendous contribution to the discussion, but the last word, I expect, will not easily be spoken.