Uri Zvi Shachar: A Pious Belligerence. Dialogical Warfare and the Rhetoric of Righteousness in the Crusading Near East, Philadelphia, PA: University of Pennsylvania Press 2021 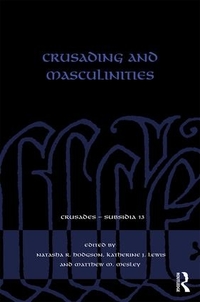 Nearly twenty years ago, the publication of Gendering the Crusades [1] triggered an avalanche of research on women and the crusades. Crusading and Masculinities is likely to do the same, with papers grouped under five headings: sources and models, contrasting masculinities, emasculation and transgression, masculinity and religiosity, kingship and chivalry. These topic clusters reflect the fact that the crusading movement was inextricably intertwined with contemporary religious and cultural practices, including formulations of masculinity which shaped participation in and writings about crusading and medieval manhood across cultures. Because different groups of men (and women) espoused values and standards of behavior which were socially and culturally constructed, these articles join an already lively debate over the definition of masculinity in multiple contexts by various parties, including regular religious, secular ecclesiastics, rulers, warriors, peasants, artisans, scholars, and merchants.

Concepts and practices of crusading thus became a "sounding board" for ideas about and the enactment of masculinity and femininity, as gender performance intersected with authority and status. Chroniclers and poets appealed to ideas of "manliness" as well as "piety" to describe the actions of crusade participants; many of these concepts influenced the chivalric ethos which helped to shape norms for high-status masculinity. However, a wide spectrum of masculinities were conceptualized and tested over the sometimes lengthy course of a crusade campaign. Warfare could be a way to rate and reinforce "manhood"; aspects of masculinity could be attributed to female participants such as Margaret of Beverly (3), while moral or military failure could lead to criticism of masculinity.

Therefore, the assumption, implied by some of the volume's authors, that medieval masculinity was, de facto, hegemonic (that is, entailed the dominance of others), should perhaps be qualified. How was the masculinity of returning crusaders transformed when, like Gobert of Aspremont, some joined monastic orders which required vows of obedience, poverty and chastity? Could suffering, poverty, humiliation, and even non-combat death on crusade be construed as evidence of manliness as well as martyrific imitation of Christ? Could this spiritual "virilitas" and "virtus" ("vir" meant "man" in Latin) be shared by women? Similarly, the concept that the crusades were by definition a masculine movement should also be nuanced; Alan Murray rightly acknowledges the persistent participation of women, children, and noncombatants in crusading (21, 89). Further essays on the intersectionality between masculinity, age, and status might have usefully probed the contested masculinity and feminity of participants in popular crusades and the construction of heretical opponents (and ambivalently viewed potential allies such as eastern Christians, Prester John, and the Mongols) as hyper-masculine, anti-masculine, monstrous, or as Peter Biller has shown in the case of some theologians' construction of Jewish "masculinity," menstruating males [2].

Readers of narrative sources ought also to be wary of how both personal attributes and actions could be (de)constructed in terms of gender and according to authorial bias and agendas. The Gesta Francorum textual tradition depicted Bohemond of Taranto as a "complex figure exhibiting tensions surrounding social status" and contested and "variant models of masculinity" (42). Similarly, the portrayal of the Fatimid wazīr Al-Afḍal in contemporary Arabic sources as a capable war leader waging jihād was perhaps encouraged by Al-Afḍal to justify his right to govern others (later resources depicted him as prone to emasculating jealousy and anger).

Anti-types and embodiments furnished concrete exemplars of abstract ideas. Yvonne Friedman and Helen Nicholson examine how authors characterized their enemies as anti-types to their culture's notions of appropriately masculine conduct even while appropriating other cultures' ideas and behaviors concerning ideal masculinity. Admiration for a formidable foe was possible, yet each side staked a claim to religious and martial superiority and Christian authors discouraged familiarity with Muslim and Jewish populations and vice versa. Idealized descriptions of the "correct" treatment of women, particularly noble mothers, were used to argue for the relative moral worth of rulers, religions, and cultures, while the brutal reality for most captured women was abuse, death, or slavery.

The idea and practice of crusading was also adapted to fit aristocratic and cultural behavioral norms. In Prussia, noble and royal crusaders who undertook a crusading tour displayed their manliness, worldly status, and honor through finery, hunting, hospitality, comradeship, piety, and battles. Many of these behaviors conflicted with the monastic austerities imposed on the crusaders' hosts, the Teutonic knights. However, both groups may have shared a common language of valor and chivalry, celibacy and endurance, and each made concessions to the others' practice of masculinity. In contrast, Icelandic sagas constructed the ideal crusader according to standards completely divergent from those formulated by the largely clerical or monastic chroniclers of the First Crusade. Enhancing individual honor and rewarding followers entailed pursuit of fame and profit, and the competitive display of masculinity through descriptions of lust and "man-comparisons."

Diverse genres also addressed cultural concerns or grey areas in the creation and enacting of gender ideals and roles, as allies and enemies were judged to have transgressed, upheld, or redefined them. Joanna Phillips examines the complicated relationship between bodily weakness and male crusading leadership, focusing on Louis IX. Susan Edginton notes some leadership qualities were derived from vernacular literature, which influenced depictions of ritual combat inserted into monastic chronicles of the First Crusade. Returning to a theme highlighted in Gendering the Crusades, [3] Niall Christie evaluates Muslim depictions of women fighting as literary test cases for the permissibility of and anxiety concerning the violation of gender roles from dire necessity (the veiled Funun), or judgment regarding another culture's errant gender norms (Frankish women as knights).

The volume also considers some of the ways in which religiosity and masculinity intersected. If part of crusading's attraction was that participants could earn salvation without forfeiting their secular masculinity or status by joining a monastic order, how were lay participants, ecclesiastics, and monks meant to navigate the temptations posed by crusader camps and act as spiritual leaders in new contexts? Natasha Hodgson illustrates how Gunther of Pairis used descriptions of his abbot, Martin, to persuade contemporaries skeptical of the merits and masculinity of monastic crusaders. Entering into a long-running debate regarding the negotiation of martyrdom on crusade, Beth Spacey argues that crusaders were depicted as embodying masculine virtue to qualify them as "martyrs." Linda Jones and Erika Tritle characterize concepts of hegemonic and subaltern masculinity as shared across Mediterranean cultures and yoked to the performance of piety and religiosity, utilizing Christian and Arabic accounts from late medieval conflicts on the Iberian peninsula. The enduring influence of crusaders as exemplary models for kingship and nobility in dialogue with the construction of chivalry is explored in further essays which investigate how particular texts used exemplary crusaders to construct noble authority and instruct young men in appropriate masculinity. Ruth Mazo Karras's afterword provides a magisterial roadmap for the study of masculinities.

This volume will undeniably prove useful for advanced undergraduate and graduate students studying the crusades, cross-cultural construction of gender, and religious history. Future avenues for research may include subtler ways in which masculinity intersected with age (childhood, youth, prime, old age), occupation, wealth and power (131). For example, Doherty and Murray both note that support of indigent crusaders was a fundamental component of crusader armies (113, 137). This support rested on conceptions of charity (caritas) and largesse, poverty and wealth; were these gendered? A chapter on eunuchs would also have been most illuminating, given the prominent roles they played in Byzantium and the Mamluk and Ottoman empires (not to mention various Asian cultures), as would sustained treatments of non-binary expressions of gender and permanent or temporary celibacy's impact on the construction of gender. However, it is easy to criticize pathbreakers when one follows the trail they have laid, and these questions are testimony to the important issues raised in this volume.

[1] Susan B. Edgington / Sarah Lambert (eds.): Gendering the Crusades, New York 2002 (Initially published by the University of Wales Press in 2001).