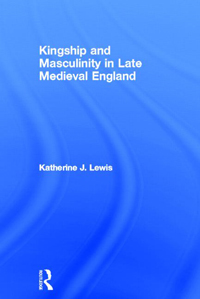 Katherine J. Lewis' Kingship and Masculinity in Late Medieval England explores ideas and ideals of kingship and masculinity in fifteenth-century England. It focuses in particular on the reigns of Henry V and Henry VI and uses the lens of gender to explore the dynamics and ideologies of kingship in this period.

The book is split into four main sections. It begins with a sensible overview of kingship and masculinity which places Katherine J. Lewis' research within the wider historiography and offers a nuanced definition of gender. (1-44) It discusses the role(s) which masculinity can play within the context of politics, the ideologies of rulership and also the importance of relational identities for example, by considering the role queens and queenship could play. This is followed through in the book by close consideration of the portrayal and presentation of Margaret of Anjou who acts against her feminine nature in her attempts to safeguard the throne for her husband, Henry VI and her son, Prince Edward. (229-252)

The second chapter considers approaches to Henry V and Henry VI. It provides a concise and sensible overview of the key themes covered including the king's relationship to the body politic, counsel, self-control, marriage and war. It also touches on a central interpretative issue for gender historians: how to access the individuality of historical subjects. (35) This is the starting-point for Katherine J. Lewis' rich and engaging foray into the life and politics of her chosen subjects, Henry V and his son Henry VI.

The following two parts focus on Henry V and Henry VI following the life-cycles of both men as they become kings. Family dynamics provide key insights into the types of rulers Henry V and Henry VI were as it allows access to them as sons, brothers and husbands. This allows hegemonic, homosocial and competitive displays and constructions of masculine behaviour and actions to be analysed in rich detail. The contrasting masculine configurations of Henry V and Henry VI underline how far kingship was predicated on the ability to embody and display ideas and ideals of masculinity. What is particularly interesting is how far the image of Henry V's masculine success impacted and effected attempts by Henry VI to live up to his father's image. By placing these ideas and ideals of masculinity within the broader socio-political context Katherine J. Lewis is able to nimbly demonstrate how fluid masculine ideas were as well as how far social-political circumstances impacted upon which specific values were praised or criticised in particular contexts. For example, the image of Henry V at Agincourt underlines his exemplary manhood in various ways including linking his success at war with the virility of his army and the nation at large. (103-119) This is in stark contrast to the young Henry VI whose failure to cultivate and display martial qualities contributed to his inability to appear manly to his people and to the image of him as an ineffective ruler. (141-155)

There is much to commend Katherine J. Lewis' book and the scholarship is careful and engaging in style. Translations of key Old English passages which shed light on the images and illusions of kingship scattered throughout the book might have been especially useful for students and more general readers approaching the subject and topic for the first time. More could have been made of the thorny question of audience, especially as the subjective nature of kingship means, as Katherine J. Lewis rightly states, "a certain degree of informed and indeed imaginative speculation" is required. (36) The question of audience is touched upon at the beginning of chapter two but issues such as how and in what ways ideas and ideals of kingship and masculinity are reflected and refracted through an audience and its expectations would have been helpful. Linked to this are questions concerning how unique the portrayal of Henry V and Henry VI are in terms of the types of masculinity and kingship associated with them. Whilst didactic guides, especially the 'mirror for princes' genre is rightly identified as having a long pedigree (17) how far similar or different perceptions and perspectives of masculinity and kingship are current in other existing contemporary materials would be worth considering in a broader European context.

The book closes with an Epilogue which looks forward to the reigns of Edward IV, Richard III, Henry VI and Henry VII. The thematic comparisons between Henry V and Henry VI (257) could have been expounded further and in doing so really emphasised how and in what ways gender operates within the ideology of kingship as well as how far ideal masculinity is a particular criteria against which the performance of kingship can be assessed. Overall, Kingship and Masculinity in Late Medieval England is a very welcome addition to the study of masculinity and kingship. One hopes that Katherine J. Lewis' thought-provoking study spurs a host of new works on this important and somewhat neglected topic.