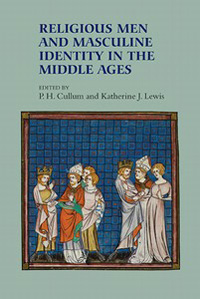 Most of the papers in this volume were originally presented at a conference at the University of Huddersfield in July 2012, which was a follow-up gathering to the one in 2001 (proceedings then had appeared in 2004). While 'femininity' in the Middle Ages has already been the focus of much research, 'masculinity' still challenges us and requires further investigations, as the contributors demonstrate in a variety of approaches, focusing, however, on the religious world, hence on ecclesiastics. Specifically, as the authors emphasize, clerical identity was a unique phenomenon, and it is curious to think about masculinity only through that lens, though it makes sense at least for the present project.

Considering the wide variety of articles contained here, it will not be easy to convey a clear concept of what 'masculinity' truly might have meant in the Middle Ages. Michael L. Satlow begins with the way how Jews studied the Torah in late antiquity, which he identifies as a useful strategy to determine gender orientation by means of self-control and suppression of sexual desires. This then leads, though the historical leap is rather stunning, to a study by Rachel Stone who simply examines the life and work of Archbishop Hincmar of Reims (845-882), who consistently strove to maintain his authority in public and private. Most interestingly, Jennifer D. Thibodeaux investigates the struggle by Anglo-Norman clerics against celibacy imposed on them since the Gregorian Reform, by analyzing four twelfth-century treatises. Their main argument was that "marriage, monogamous and indissoluble, was a necessary component of lay masculinity" (57). While continence was one possible approach for clerics, marriage was another, equally legitimate. Some of the authors even cast doubt on the honesty of their critics, who wanted to reform the Church and eliminate sexuality altogether, yet were guilty of seeking it for themselves through other channels.

Kirsten A. Fenton discusses the life of the twelfth-century chronicler and poet, the Archdeacon Henry of Huntingdon, who reflected intensively on the problems for clerics to repress their sexual urges, and this even among the highest ranks, as they were discussed at various Church councils. The same issue surfaces in Joanna Huntington's study on Hereward 'the Wake' and the question how celibacy and marriage could be balanced both within the Church and outside as illustrated by the fictional character Hereward in the Gesta Herwardi, a ferocious and rambunctious young hero mercenary helping damsels in distress and fighting against William the Conqueror. Only once he has married and submitted under the lordship of an abbot does he fully gain the reputation of an adult male in his society.

Episcopal authority in the first crusade is the topic of Matthew Mesley's contribution, in which he pinpoints such authority as a major marker of masculinity in the case of Bishop Adhémar. By contrast, Marita von Weissenberg examines the saintly lives of the comb-maker Pietro Pettinajo from Siena and Elzéar de Sabran, count in Sicily (both fourteenth century). Even though both were married, they led a holy, hence celibate life within this world, which did not, however, diminish their masculinity. On the contrary, the accounts of both men served as models for other men in their communities to follow those ideals.

Some medieval kings enjoyed a thaumaturgical reputation, such as King Henry VI of England, whose life and martyrdom in 1471, subsequently his miracles, is the topic of Katherine J. Lewis's paper. Even though he practiced chastity and abhorred nakedness in public, this did not diminish his masculinity; on the contrary, because of his reputation of being a saint elevated him above the other people, as his chronicler John Blacman confirmed. A very similar situation emerged in the case of John of Bridlington, who was the last individual in England to be canonized before the Reformation, that is, in 1401. Catherine Sanok examines, above all, the Life of John of Bridlington, today kept in Yale University Beinecke MS 331, and she confirms that masculinity was really a rather fluid matter and depended much on the circumstances and ideals conveyed thereby.

James G. Clark raises the valid question why so many men joined monasteries in late medieval England and observes that a vast majority of them probably looked for an intellectual safe-haven and for economic stability, which a monastery could easily provide ("settled residence", 179). P. H. Cullum concludes the volume with a study on the difference between men's and women's approach to imitating Christ. While women tended to turn to fasting, religious men, both lay and clerical, resorted to feasting and feeding, copying the holy supper. Cullum illustrates this phenomenon by way of an analysis of Richard Rolle's Meditations on the Passion and of the cases of lay individuals who received the permission to hold private masses in their homes and to hand out the Eucharist, as Christ did at the last supper.

Even if the term 'masculinity' might be somewhat vague in the broader context of this volume, the central issue, gender identity among the ecclesiastics, finds excellent illustrations. It is not quite clear whether 'masculinity' fully serves the term as intended by the theorists, but 'femininity' is equally problematic. The contributors carefully examine specific cases or texts, some of which are a bit far apart from each other, and succeed individually to bring to light how late-medieval clerics and lay persons (with the exception of late antique rabbis) confronted the issue of selfhood within a gendered world. The stimulating volume concludes with an index.