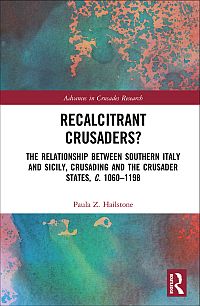 The growth of Mediterranean studies has stimulated fresh interest in the Normans and their influence in Southern Italy, Sicily, North Africa, and the Holy Land, areas formerly portrayed as "peripheral" in older surveys of medieval history focused on northern Europe and Italy. This first monograph investigates the ways in which Italo-Norman crusaders before Frederick II crafted identity in an "eclectic kingdom". The author provides useful timelines, family trees, and charts of Guiscardian references in the Gesta Tancredi, while the ebook formatting provides accessibility features, basic search and annotation tools, and smoothly functioning hyperlinked footnotes.

As the author rightly notes, any study of Norman involvement in the East must explain William of Tyre's claim that the Sicilians were supremely disinterested in or overtly hostile to Latin settlers in the Holy Land after the dissolution of the marriage of Roger II's bereaved mother, Adelaide, and King Baldwin I of Jerusalem, which quashed any hopes that Roger might inherit the Latin kingdom of Jerusalem should the couple prove childless. In fact, as Hailstone aptly demonstrates, Norman disinterest in crusading after 1117 was due to complex factors, and the Norman kingdom hosted pilgrims, diplomats, crusaders, and merchants and physical reminders of the Holy Land's presence in material objects, buildings, and religious orders (the one glaring omission here is liturgy).

Hailstone sees the changing and sometimes problematic relationship between intermittent Norman "assistance" to the Christian inhabitants of Southern Italy and Sicily and Norman pilgrimage to the Holy Land, service in the Greek armies, and participation in crusading as preconditioned by and allied to protean alignments and identities, ambition and piety, a nexus crucial to exploring the evolution of crusading ideology. While most crusade historians have highlighted Italo-Norman involvement in the First Crusade and the early principality of Antioch but blame Antiochene politics for dwindling Norman interest, Hailstone argues that the political climate in southern Italy and Sicily meant that the Normans of Sicily forged an identity and "rough tolerance" already distinct from that of their northern relations. The realities of multicultural society in Sicily meant that southern Normans were multilingual, prone to engage in diplomatic negotiations, and to possess a greater awareness of distinctions between eastern Christians and Muslims and to view them as potential allies. These practices proved crucial to the establishment and survival of the initially Norman kingdom of Antioch (Chapter one).

Chapter two outlines the "conscious construction" of the living and posthumous identity and reputation of Bohemond of Taranto and Tancred of Hauteville through crusading, military campaigns, rule, marriages, tombs, family memory, naming practices, propagation of the cult of Saint Nicholas at Bari, and crusade narratives such as the Gesta Tancredi (The Deeds of Tancred).

In contrast, chapter three argues that, pace William of Tyre, it was the establishment of the Norman kingdom of Sicily, the multicultural atmosphere of the royal court at Palermo, and interest of the Normans in North Africa which led to apparent Norman disinterest in the Holy Land until the reign of William II, although Southern Italy's ports continued to provide a vital link in the chain of communication between the West and the Holy Land. Contrary to some who have seen Norman intervention in Ifriqiya as religiously motivated, Hailstone notes that as a numeric minority, the Normans maintained a "pragmatic and conciliatory policy" towards the Greeks and Muslims under their nominal rule and eschewed joining the Pisan and Genoan assault of Mahdiyya in 1087, lest the lucrative grain-for-gold trade be endangered. When the Normans did attempt to seize control of North African ports in the 1130s, Roger II cultivated relations with the Fatimids in Cairo to isolate the Muslim rulers of Ifriqiya. Despite Roger's deliberate adoption of elements of Byzantine and Christian identity to reassure other Christian rulers, Palermo's court culture remained "Arabicised" in contrast to that of mainland Italy and Roger II declined intervention in the kingdom of Antioch and a proposed joint crusade with Conrad III of Germany against Byzantium.

Similarly, William II of Sicily's decision to assist the Latin Kingdom of Jerusalem was motivated by a convergence of political and economic interests rather than an overwhelmingly religious imperative to save the Holy Land. William had to secure his own kingdom, and the Sicilian navy sent to the Holy Land in response to Christian defeat at Hattin (1187) was not followed by a sizeable Sicilian contribution to the Third Crusade, largely due to William's premature death and the ensuing succession struggle. Almohad expansion in North Africa, in contrast, led to the loss of Sicilian outposts there, and to an influx of Latin-Christian immigrants into and suspicion of Muslims in Norman lands, resulting in a greater Latinization of the Sicilian court. Perhaps due to rivalry with the Genoese and Pisans, Sicilians appear to have participated in some of King Almaric of Jerusalem's attacks on Egyptian ports, although the Italo-Normans do not appear to have viewed these expeditions as "crusades". Sicily also played an important role as a supply depot and staging post for Richard I's crusade armies (Richard also intervened on behalf of his sister Joanna, William's widow) and the crusade of Henry VI, then king of Sicily.

Chapter five examines Sicily as a crucial exporter of agricultural products and as an intersection point for pilgrimage and trade corridors to the Holy Land, Byzantium, Asia Minor, and North Africa. In particular, the cult of the forcibly translated relics of Saint Nicholas at Bari and its association with crusade commemoration within Sicily deserves greater examination, as crusader pilgrims often stopped to acquire relics of Saint Nicholas (known for protecting pilgrims and traders at sea); Bohemond of Taranto deeded the captured tent of the Turkish leader Kerbogha to Saint Nicholas and reliefs at the basilica at Bari depict Normans battling Saracens. While direct Sicilian military intervention in the Holy Land was limited, interactions between the two regions, testified in the exchange of relics, manuscript illumination techniques, architecture, law codes, and the influence of Levantine architecture and military orders in Sicily provide powerful evidence of cultural, diplomatic, economic and religious exchange between the Norman kingdom and the Holy Land, more so than between the Italo-Normans and their northern Norman relatives.

Drawing on a wealth of material evidence and primary sources from the Latin Kingdom of Jerusalem and the Kingdom of Sicily, written in Greek, Armenian, Hebrew, and Arabic, this book joins a growing collection of works which situate crusading within the larger historical context of Mediterranean cultural, religious, and economic exchange. As such, it would be highly suitable for undergraduate surveys on crusading or Mediterranean history and for graduate students and scholars interested in new methodologies and questions currently employed by scholars of the Mediterranean and of the history of Southern Italy and Sicily, North Africa, and the crusades.