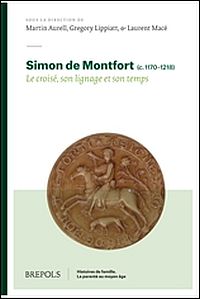 Historians and popular opinion have alternatively hailed the French count and crusader Simon de Montfort as an orthodox champion of Catholicism and proto-nationalist unifier of Northern and Southern France or have decried him as a brutal proto-colonialist who destroyed a rich and tolerant Occitanian culture. These persistent historiographical binaries originated within Simon's own lifetime; Peter of Vaux-de-Cernay's hagiographical depiction contrasts sharply with the vituperative Canso de la crozada.

As a collection of papers delivered at a conference commemorating the 800th anniversary of Simon's death (1218), the volume under review instead reevaluates Simon's career as crusader and ruler and the influence of successive generations of Montforts both within Europe and the Mediterranean. It therefore contributes to a larger historiographical trend which seeks to understand the ways in which crusading shaped structures and identities within as well as between cultures.

Jean-Louis Biget reappraises Simon's leadership of crusades in the Midi, while Gregory Lippiatt analyzes the Statutes of Pamiers (1212) as evidence of Simon's intentions as a ruler. Biget rightly notes Simon's acquaintance with the "neo-Gregorian" piety of leading reformers and promoters of crusading and the problems of recruiting and financing which dogged Simon's campaigns. However, he stresses that Simon was able to win over some southern bishops and towns and benefitted from the support of multiple papal legates and the Capetians. Simon was lauded as an ideal knight by Cistercians and northern reforming clergy for his participation in multiple crusades and his support for social and religious reforms. His rule ultimately enabled a new style of governance in Occitania, one characterized by the forcible importation of northern customs and governance through monarchical rule, inquisitions, and the mendicant orders (36-37).

Gregory Lippiatt similarly re-evaluates the Statutes of Pamiers (1212) in light of the reforming impulses and statutes of the early thirteenth century. The statutes' focus on marriage, inheritance, taxes, and judicial procedure was not only "colonizing" but intended to enable the "reliable military service," just rule, and suppression of heresy essential to the crusaders' raison d'être, the "business of the peace and of the faith." If the purpose of the crusade was to replace local clergy and rulers suspected of fostering rather than prosecuting heresy, mercenaries, and other socially destabilizing elements, Simon felt obligated to demonstrate his desire to implement "a reformed political Christianity" in writing (67). Laurent Macé demonstrates that Simon fashioned his seal as count of Toulouse to stress both continuity and change.

Daniel Power follows his magisterial article on participants in the Albigensian crusade with a full treatment, based on chronicle evidence and charters, of Amaury de Montfort's leadership of the anti-heretical campaign after his father's premature death in 1218. He maps out those who supported this phase of the Albigensian crusade, offering one possible candidate for the first master of the short-lived Order of the Faith of Jesus Christ.

In contrast, Martín Alvira and Damian Smith appropriately investigate the "other" king invested in Occitania, Peter II of Aragon, and the effects of Simon de Montfort's wardship of the orphaned minor and future king James I of Aragon. Facing a two-front war against the Almohads and in support of his beleaguered Occitanian vassals, Peter of Aragon initially engaged in negotiations with Simon de Montfort, placing his son James (betrothed to Simon's daughter Amicie) and the lordship of Montpellier under Simon's guardianship in 1211. However, Peter's feelings towards his estranged wife's dower city of Montpellier and his son James were ambivalent at best. Peter perhaps perceived Simon as a substitute for his previous allies in the Midi, including Raymond VI, until the proposed marriage of Peter's sister, Sança, to Raymond VII of Toulouse led Peter to intervene directly, first with negotiations, then at the battle of Muret (1213), to protect Toulouse, his sister's proposed domain. With Peter's death, the Catalans sought vengeance for their king and the recovery of James, re-envisaged as a hostage. Innocent III demanded James' surrender to the papal legate Peter Benevento, and intervened again on behalf of James and his female relations at the Fourth Lateran Council (1215), a policy continued by Honorius III. In the end, Peter's death and James' minority crucially refocused Iberian ambition towards the Mediterranean, not Occitania.

Similarly, losses in two arenas led the Montforts to refocus their energies elsewhere. And, as Nicholas Vincent demonstrates, the aspirational image of lordship proved as important as the reality. Despite his disseisin, Simon de Montfort continued to employ the title "Earl of Leicester". Simon's hypothetical status within the English baronage undergirded a conspiracy intended to replace the "unjust" John Lackland with the scrupulously just Simon and contributed to the barons' revolt, the Magna Carta, and the rivalry between Simon's son and Henry III, heir of the rebel barons' dispossessor, John of England. As both Vincent and Lindy Grant argue, Simon V and Guy de Montfort's crusading careers could be described as a family strategy to recover land and prestige after losing the earldom of Lecister and the county of Évreux. Another option was marriage into powerful families associated with the Capetians. After Amaury yielded his claims to Simon's conquests in the Languedoc to the French monarchy, he and his relations frequented the Capetian court and supported Blanche of Castile as regent for the young Louis IX. The Montforts' crusading prestige and pious image aligned with and enriched that of the Capetian kings. Future generations of Montforts parlayed Simon de Montfort's reputation into prestige and power.

Sophie Ambler probes the influence of family memory and Simon V's image on Simon, sixth earl of Leicester, who initially aligned himself with English monarchs by marrying Eleanor, Henry III's sister. After following his uncle and brother in travelling to the Holy Land, Simon became governor of Gascony, before being invited to head a revolution intent on installing a conciliar government in England. His participation gave that movement the trappings of a crusade, and in death he was venerated as a martyr. Ambler envisages Simon VI's childhood exposure to Peter of Vaux-de-Cernay's history of the Albigensian crusade as an ancestral history; he was encouraged to follow in Simon V's footsteps.

Amicie Pélissié du Rausas and Rodolphe Billaud likewise illustrate the difficulties and benefits posed by ancestral reputation through exploring Simon VI's career. Simon's participation in Louis IX's first crusade was stymied by his appointment as a "royal lieutenant" in Gascony. Simon's position enabled him to test theories of governance later employed in England, as attested in a surviving series of depositions against Simon by disaffected Gascons, whom Simon, like his father, viewed as traitors and oath-breakers (224, 226, 232). Perhaps motivated by the crusader Ranulf, count of Chester's long possession of the Montfortian ancestral earldom of Leicester, Simon VI later sought to seize the honor of Chester.

Catalina Girbea shows that while some deluxe Arthurian manuscripts sought to reinforce the noble identity of scions of the Montfort family spread throughout Europe, their heraldry and that of their rebellious allies was defamed in illustrated Apocalypse manuscripts commissioned by the victorious Edward I of England.

Martín Aurell concludes that the images of Simon de Montfort and his descendants are woven into the historical self-imagining of England and France and thus will always remain controversial. The conclusion also describes two unpublished pieces delivered at the colloquium by Björn Weiler and Alexis Charansonnet, which would shed valuable light on the reputation of Simon V and his descendants among contemporary chroniclers and in mid- to late thirteenth century pastoral literature. Despite the volume's lack of index or bibliography, it should prove of considerable value to advanced undergraduate and graduate students and researchers interested in the intersection of family memory and crusading, lordship, patronage, and devotion in thirteenth-century society.