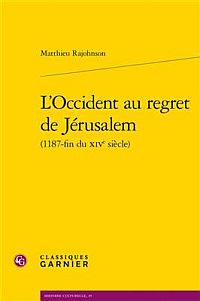 Rajohnson's expansive, interdisciplinary monograph adopts a longue durée approach, utilizing techniques from the history of ideas and emotions to examine a wide range of sources which helped to shape the idea of Jerusalem and Latin Christian reactions to the city's capture by the First Crusade (1099) and to its subsequent "loss" (1187, 1244) via a dynamic discourse between various groups: liturgy, poems, sermons, narratives, pilgrimage and crusading treatises, papal letters, glossed and illustrated Bibles, iconography, and cartography. However, there are some recent notable works overlooked, including Miikka Tamminen's and Constantine Georgiou's monographs on crusade preaching and new digital repositories of crusade poems. [1]

Rajohnson rightly notes the tensions between the images of kingly and sacral power attached to both Rome and Jerusalem from the very origins of the crusade movement. There were tensions too, regarding the methods by which Jerusalem might be best obtained: violent conquest, treaties with non-Christian rulers, missions and conversion. But as he stresses, the "image" of Jerusalem was perhaps more important and lasting than the fleeting Latin Christian occupation of the earthly city of Jerusalem. While the Latin Christian conquest of Jerusalem was treated as the triumphant conclusion of the First Crusade in western historiography and liturgy, the loss of the relic of the True Cross and the city of Jerusalem to Saladin in 1187 sent emotional shockwaves throughout Latin Christendom. Spiritual authorities called for reform and penance, interpreting these "disasters" as divine punishment for sin (either of western or eastern Christians, or both), and as a second passion inflicted on Christ and the holy city of Jerusalem, depicted as a polluted and dishonored female captive. Such powerful sentiments were fostered and expressed via liturgies, sermons, treatises, royal and papal letters, and poetry. Nearly continuous appeals to "free" Jerusalem from Muslim control meant that Latin Christians of all estates invested their prayers, alms, military resources, and selves in multiple crusades and reforming efforts intended to recover the Holy Land, from roughly 1187 to 1291. [2]

Perhaps most importantly, this barrage of appeals embedded Jerusalem in the consciousness of Latin Christians. As numerous crusades were planned and failed to recover Jerusalem, participants turned to signs and miracles as potential indicators of divine favor. Prophecies with adaptable timelines were employed to situate the crusades and Latin control of Jerusalem within a historical trajectory which culminated in the conversion of all peoples before the Last Judgment. Prophecies also became a way to process the crusaders' triumphant capture (1099) and devastating loss (1187) of Jerusalem. The city's religious and eschatological relevance also equipped Latin Christians with a unique opportunity to conceptualize their relationship to Muslims and eastern Christians (314-321).

Rajohnson makes particularly original contributions in his study of glosses and illustrations of the book of Lamentations (231-248), and through noting regional variations in the ways in which communities responded to the loss of Jerusalem through ritual and exegesis (248-300). However, he argues that while the loss of Jerusalem perhaps led to the concept of western Christendom crystallizing, some regions might not have shared the "because of our sins" motif linked, in England and France, to monarchical identity, liturgy, and Parisian glossed Bibles (273-300). Simply put, the recovery of Jerusalem was both a unifying and a divisive goal, as Christian rulers competed to be the first to recover, and in the case of Frederick II, to rule the sacred city (325-366).

Rajohnson also outlines the shift, in Latin Christian sources, to the depiction of Jerusalem as a resolutely "Latin Christian" city polluted and dishonored by Muslim occupation. In order to minimize the claims of eastern Christians and Muslims to Jerusalem, Latin Christian writers justified the Latin Christian recovery and occupation of the city as a hereditary right. They presented themselves as the lawful successors to the Hebrew, Roman, and Frankish empires and depicted the earthly Jerusalem as central to the commemoration of and participation in salvation history and eschatology. Initially, Latin Christians fixated on the Holy Sepulchre; however, in later periods, the holy city became so identified with events of the life and passion of Christ that the loss of Jerusalem, consecrated by Christ's blood, was presented as the re-crucifixion of Christ himself (370-457). Sacralization of Jerusalem manifested itself in the de-emphasis of non-sacred places of commercial exchange in textual and visual depictions of the city (470-82). Jerusalem retained its symbolically central place as the "navel of the world" not only on O-T maps, but later world maps and pilgrimage itineraries (495-514). The walls and gates of Jerusalem became its defining feature, partly due to traditional depictions of the triumphal entries of Christ and of Heraclius. Here the discussion might have benefitted from a more thorough exploration of depictions of the heavenly Jerusalem in Apocalypse commentaries (520-538, 544-545).

As part three demonstrates, after multiple attempts to retake Jerusalem failed, both the earthly city and the idea of Jerusalem gradually became more distant for western Christians (555). Multiple often-simultaneous crusades soon targeted variously defined "enemies of the faith" in other regions. Although these campaigns were commonly presented as defending the boundaries of Christendom or as an intermediate stage or complementary goal to the recovery of Jerusalem, over the course of the thirteenth century, Jerusalem had begun to lose its primacy, a prelude, perhaps, to the extension of the goals of crusading to not just the Holy Land but to other theatres (576-603). While papal letters, councils, crusade treatises and proposals proliferated in the later thirteenth and fourteenth centuries, calling for peace between western powers and the organization of new crusades, most plans failed to materialize, leading some to rethink priorities and methods. Perhaps conversion might achieve what military campaigns had not (606-621).

There is evidence too, after 1187, of a growing detachment from the earthly city of Jerusalem; recovery treatises and pilgrim guides and maps increasingly began to elide features of former Latin occupation, focusing instead on the city's biblical past or exoticizing it (634). There was also a marked return to the concept of heavenly Jerusalem, as the "vision of peace" and symbol of the church militant and triumphant; yet, contemporaries argued, as the locus for the second advent of Christ at the Last Judgement, Jerusalem must, of necessity, return to Christian control. Modern readers might find themselves confused at this point; perhaps if the section on the exegetical fourfold meaning of Jerusalem (839-853) had been moved to this chapter, the conceptual relationships between Jerusalem as earthly city, church militant, individual soul, and heavenly homeland (church triumphant), might be more apparent, as would be the debate concerning which Jerusalem(s) were more important. Did gaining one assist in gaining the others? For example, could a crusade fail to achieve the earthly Jerusalem yet enable the salvation of individual souls? (653-662).

This intellectual detachment manifested itself in the spatial marginalization of Jerusalem. While the concept of Jerusalem as the geographical and religious center of the world persisted, it was sometimes portrayed, in later periods, as but one of many cities (although this was less true of inherently conservative genres such as pilgrimage guides and descriptions of the Holy Land). This was partly due to the growing realization, with greater travel into Asia and Africa (and one might add, the legend of Prester John), that Jerusalem might not be the precise geographical center of the Christian world (694). A gradual cultural detachment meant that Jerusalem's physical features and peoples were depicted either as firmly biblical and/or currently "oriental" or "other." This phenomenon accompanied, in pilgrim guides, complaints that Muslim rulers favored "eastern Christians" and "Saracens" (704-710), and eventually, resigned acceptance of Muslim control of Jerusalem (724-26).

The final third of the volume delineates this gradual acceptance of Jerusalem's loss, the product of the "banalisation" of the crusade and its application less to the recovery of the Holy Land than to combatting the "infidel" on multiple fronts (728, 738). Despite immediate and fulsome reactions to disasters such as the fall of Jerusalem (1187, 1244), and that of Acre (1291), by the later thirteenth century, an air of resignation or acceptance manifested itself in the illustrations inserted in glossed versions of Lamentations and crusader narratives. While the liturgy focused on peace in Jerusalem (745-765), Saladin was depicted as a worthy opponent (767-777). Resignation to the loss of Jerusalem was enabled by the ubiquitous dispersal of pieces of the holy city throughout western Christendom in the form of liturgies, relics, pieces of holy sites, and reproductions of the Holy Sepulchre (783-786). Mental or physical visits to replicas of the idea of Jerusalem were viewed as real pilgrimages, while Rome positioned itself as another Jerusalem or even as superior to it (790-810).

However, as Rajohnson shows, Latin Christians ultimately proved unable to fully surrender the dream of possessing the earthly Jerusalem. The breadth and depth of Rajohnson's work will make it a standard reference volume for scholars of the crusades and Christian-Muslim relations for decades to come.