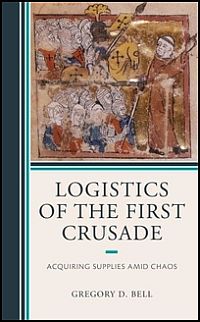 The daunting preparations and logistics required to form an effective crusade expedition have recently been reappraised, as crusade historians challenge the "stereotypical representation" of medieval crusaders as "greedy, undisciplined, needlessly violent, and barbaric mob[s]" (xiv). Crusading armies faced particular challenges: staggeringly long distances to traverse, heterogeneous composition, and securing supplies and mounting effective military campaigns in unfamiliar territories occupied by ambivalent or hostile forces. The monograph reviewed here builds on previous research to argue that a key factor to the success of the First Crusaders was their adherence to a "standard series of practices when supplying themselves" (xi).

Bell's study utilizes archaeological studies, charters, cartularies, letters, crusader narratives, and fictional works from Latin, Jewish, Byzantine, eastern Christian, and Arabic traditions. However, given the vast amount of recent work on the construction of crusade narratives and commemoration, [1] Bell's confidence in rating the trustworthiness of sources is somewhat disconcerting. Were letters and charters in fact less rhetorically charged or "emotionally biased" than narrative accounts? Crusade newsletters were laboriously constructed and circulated while papal registers and monastic cartularies were highly selective in terms of which documents were preserved and how; these and other sources require cautious treatment.

These reservations aside, Bell makes several important points. He challenges John France's argument that coordination by Alexius, the emperor of Byzantium, was considered crucial to the First Crusade's success. He thereby contributes to debates about the nature of crusading: were campaigns organized in a top-down fashion by papal or imperial coordination, or from the ground up by local nobles and communities? The answer is a bit of both. Urban II attempted to set a departure date and restrict participation, designating Adhémar of Le Puy as his representative, but left logistics to the crusader leaders. Participants made personal preparations but also sought to attach themselves to wealthier militarily experienced leaders organizing their own contingents. Typically, funds for several years were acquired, often by settling disputes with or selling or mortgaging assets to local monasteries and churches, family members, or superiors, or by extorting funds from Jewish communities. The First Crusaders' hunt for coinage and precious metals similarly contradicts the theory that Europe was primarily a barter-based economy in the eleventh century (10).

Contingents were often organized and led by region, with the exception of the People's Crusade led by Peter the Hermit, disappointingly characterized here as poorly prepared and "unrestrained" (13), due to the fact that its contingents left before the papal deadline, attacked Jewish communities, and employed violent tactics in Hungary and Byzantium. Bell cites the People's Crusade as a counter example to highlight the "focus and relative orderliness" of other crusaders (17). He thereby adopts the bias of surviving narratives intent on highlighting the ability of other clerical and military leaders to "control" their contingents, which tar the People's Crusade to better construct the self-perceived righteousness of the intent and conduct of other crusaders, despite the fact that both groups used similar tactics. Did ensuing contingents fare better because they followed a deliberate policy of acquiring supplies through peaceful transactions, with violent seizure as a last resort? Perhaps they, and the rulers and inhabitants of the lands they traversed, benefited from hard lessons learned from the prior passage of the People's Crusade. For example, later contingents used pack animals and set out after harvest time, when food was plentiful. In contrast to his treatment of the People's Crusade, Bell argues that the themes of violence and hardship in most historiography obscure attempts by later leaders such Bohemund of Taranto and Godfrey of Bouillon to maintain discipline and restrict violence to strategic rather than spontaneous foraging, looting, and ravaging (32-40).

As Bell notes, the ubiquity of the term peregrini in charters and narratives hints that the crusaders perceived of themselves and their expedition as a pilgrimage and made preparations accordingly, welcoming the hardships they encountered as proof of their penitential suffering. Their clear objective (Jerusalem) made the logistics of the First Crusade relatively simple by comparison to later crusades where the expedition's ultimate goal became the source of friction. Once crusade forces reached Byzantium, Emperor Alexius appears to have intended to control them partly through forcing key crusade leaders to take oaths of loyalty and pledge to return any lands conquered in Asia Minor (56).

Utilizing the sieges of Nicaea, Antioch, and Jerusalem as case studies, Bell argues that the Christian army's siege capability was crucial to the success of the First Crusade, but that it hinged on Byzantine logistical support via sea transport, provisions, and perhaps funds and valuable gifts. After the crusaders had effectively lost this support, they established a common fund to subsidize the production of siege engines and buy supplies, although a Turkish scorched earth policy led to foraging or dispersal to regions with plentiful supplies or "satellite bases", suggesting that the problem was not food scarcity but lack of transport and hostile forces blocking access to ports and supply depots (113-116). One wonders how much the crusader army's survival was due to occasionally ambivalent support from the local populace, particularly in Anatolia and Cilician Armenia, although Bell may have adopted the crusader chronicles' depiction of relations with the Armenians as ubiquitous friendly. In contrast, Christopher McEvitt suggests that the Armenians may have viewed the Franks as valuable for their diversion of resources from would-be Byzantine or Turkish overlords (68, 75-77).

The crusaders soon realized that Muslim foraging parties had to be cut off to prevent raids and effectively starve the citizens of Antioch, a goal achieved through constructing counter-fortifications with tools and materials carried by Genoese and English fleets (128-31). After obtaining access to Antioch through negotiations with an Armenian Christian, the crusaders were themselves besieged by Kerbogha. Social divisions soon emerged; the wealthier could buy provisions at markets or travel to regional supply bases while the poor starved. Frequent desertions led remaining crusader leaders to swear to hold Antioch unless the common council decided otherwise, although it seems dismissive to attribute the visions reported as a "rudimentary propaganda campaign" (142). Bell reinterprets the crusader army's dispersal, after its victory over Kerbogha, as an attempt to conquer outlying settlements; crusaders were motivated not by greed and ambition but by concern for "control of the region" and sufficient supplies. By this point, Bell asserts, the crusaders no longer needed or wanted Byzantine support and it made strategic sense to retain Antioch for themselves (145).

Bell claims that similarly strategic decisions determined the crusader's choice of the coastal route to Jerusalem, as they planned on being resupplied by a Pisan fleet. When the Byzantine navy attacked and delayed the Pisans, the crusaders remained stalled at Antioch. The poor soon pressured the crusade's leaders to contribute a portion of the spoils to the less affluent and to proceed towards Jerusalem at a time of year when freshly harvested food was available. For Bell, this suggests that the common fund set up earlier had been limited to a select group, not intended for the army as a whole (158-159). After the crusaders' putative anti-Turk allies, the Fatimids, seized Jerusalem, aware of their tenuous supply line and lack of water, the crusaders applied every strategy acquired from previous campaigns to swiftly seize Jerusalem (167).

This intriguing volume makes important arguments about the intentionality of crusading; religious motivation did not obviate military decision-making. However, this reader retains reservations about some of the conclusions reached regarding the relations between the People's Crusade and later waves of crusaders and between the crusaders and other major players in the region. Other important issues were sidestepped, such as the complex interactions between eschatological or spiritual aspirations and political and military ambitions. Similarly, other major logistical problems facing armies, such as extraction and return home or the establishment of a permanent occupation force (settlement) or transfer of power to local friendly forces were omitted. The First Crusade did not end with the capture of Jerusalem and all these issues would become major concerns for the First and ensuing crusades.