Beth C. Spacey: The Miraculous and the Writing of Crusade Narrative 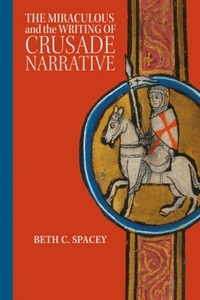 Drawing inspiration from recent work on crusading narrative, memory, the miraculous and responses to it, this first monograph concludes that medieval authors of crusade narratives found the miraculous a "versatile tool" (2). While successful crusades were often reaffirmed through accounts of miraculous divine intervention, repeated failures were interpreted as divine chastisement for sins. Contested and critiqued crusades led medieval authors intent on rationalizing them to deploy miracles to demonstrate divine approbation. Arranged thematically according to miracles and marvels, visions and dreams, signs and augury, this book draws on a wide range of narrative sources, but less so on liturgical, epistolary, or homiletic material. This is perhaps because, as Spacey warns, her book is concerned not with examining the "reality" of crusader belief in the miraculous (or emotional reactions depicted), but the employment of the miraculous as a narrative strategy, much as recent studies by Marcus Bull and Megan Cassidy-Welch have explored the authorial construction of eye-witness accounts and crusade memory. [1]

This requires probing medieval definitions of the miraculous and marvelous, of the relation of the supernatural to the natural, of distinctions between visions and dreams, and between divine signs and astrology/astronomy, horoscopy, augury, and prophecy. Spacey concludes that prognostications could be used to define the "superstitious" practices of non-Christians, to lend a sense of urgency to narrated events, or to affirm that such events were, in retrospect, divinely preordained. For many chroniclers, miraculous signs and events were, by definition, evidence of divine intervention in natural course of things; the First Crusade's recapture of Jerusalem, and, more scandalously, the Fourth's seizure of Constantinople, were proof of divine favor and legitimacy. Miracles could also sanctify particular individuals or groups. However, tensions soon emerged between theories of the miraculous as wondrous and a new interest in causation. Chroniclers therefore carefully traced the credibility of their sources and employed "skeptical narrative intervention in the name of authorial self-fashioning" (22-23).

Spacey argues that accounts of miracles accompanying Bernard of Clairvaux's recruiting for the (failed) Second Crusade presented Bernard in hagiographical terms as a fit conduit for divine power (28). She claims that in contrast, none of the chronicles of the Third Crusade pointed to miracles accompanying recruiting due to the lack of an obvious recruiting figurehead, protracted preparations, and the crusade's failure to recover Jerusalem. However, perhaps the most obvious reason was that contemporary sermons, liturgy, and papal letters focused, after the loss of both the True Cross and Jerusalem to Saladin, on divine disfavor and the need for repentance. This would explain why, as Spacey notes, Gerald of Wales utilized miracles to exculpate the crusade organizer Baldwin of Canterbury and why other Fourth Crusade chroniclers made the charismatic Fulk of Neuilly's miracles crucially dependent on the penitent state of recipients. The vindictive miracles inflicted on Sabbath breakers reported by Eustace of Flay similarly fit the reforming tone of recruiting post-Hattin.

While some chroniclers (and recruiters) reported miracles as divine approbation of a crusade in its preparatory phase, most narrators reported divine intervention in crusade battles in the form of celestial knights or heavenly armies, thereby alluding to righteous or apocalyptic warfare described in the books of the Maccabees and the Apocalypse. Even when the rhetorical presentation of a particular crusade as a miraculous manifestation of divine intervention unraveled in the case of "failed" or "contentious" campaigns (41), chroniclers inserted individual miracles to indicate God's agency, approval, or punishment, most spectacularly in narratives of the Second Crusade. Tasked with explaining how a campaign which began with confirmatory miracles worked by Bernard of Clairvaux ended in abject failure, Otto of Freising, Bernard, and his hagiographers departed markedly from Benedictine chroniclers' treatment of the First Crusade as one prolonged miraculous event. They concluded the crusaders' sins had undermined Bernard's divinely sanctioned message and heavenly assistance; although a military failure, the crusade nonetheless provided opportunities for salvation.

In fact, Spacey notes that divine punishment of crusader sins was embedded in virtually all crusading narratives (46). Here, however, there is a startling lack of reference to what would have been, for medieval audiences, the familiar pattern of the Old Testament cycle of election as a chosen people, sin, chastisement, and repentance rewarded by renewed divine intervention. Spacey does, however, analyze chroniclers' employment of miracles to address anticipated doubts regarding the nature of contested or diverted crusade campaigns and to assign praise and blame to individuals and groups. This occurred perhaps most systematically in narrative accounts of the Fourth Crusade and the translation accounts crafted to legitimize the forceful transfer of relics from Constantinople to Latin Christendom through miracles enabling relics' translation or confirming the crusaders' sanctity (despite their sacrilegious actions) or the transferred saints' patronage of their new communities.

Medieval authors also wrestled with the blurry boundaries between visions and dreams, described in biblical texts where prophets revealed the divine will through either modality and by scholarly authors such as Macrobius and Augustine of Hippo, who synthesized Platonic and Christian thought. Some chroniclers utilized these authorities to describe visionary experiences, most notably in representations of the debates over the authenticity of the visions of Peter Bartholomew and Stephen of Valence. Concernd by Peter's lay status, some authors transformed him into a cleric, while others clearly mistrusted visions occurring while asleep. Providing audiences with tools to navigate visions was essential precisely because visions were "valuable tools for the narrativization of crusade history" (86). Visions could prove divine favor or judgement, provide instruction, justify the authenticity and transfer of relics, and clarify the uncertain status of the deceased. Spacey here enters the debate, in crusader circles, over whether crusaders were typically considered martyrs. She finds that while there was greater certainty about crusader martyrdom by the later twelfth century, doubts persisted as to whom was reckoned a martyr and under what circumstances. Visions therefore became one form of proof for individual martyrdom, and by extension, the legitimacy of crusading. But revelations, as in the case of Gerald of Wales' harrowing vision of Christ's lanced side, could be critical too, either by their content or, in the case of the Second Crusade, their absence.

According to Augustine, creation was God's second revelatory book, and for most medieval writers, signs and marvels could consist both of downright supernatural and of unusual but naturally explicable events (comets, earthquakes, eclipses). However, theologians grappled with the propensity of classical and non-Christian cultures to interpret such signs through potentially illicit means (horoscopes, astronomy, prophecy) and, particularly with the advent of the libri naturales, with "scientific" explanations for strange phenomena which reduced the potentially religious significance of the marvelous. Such tensions were often dramatized in crusade narratives through explicit descriptions of "perceived Others," such as Kerbogha's mother. Interpreting celestial signs presented specific problems, as recourse to astronomy or astrology from classical texts enriched with Arabic commentaries (incorporated into the quadrivium) could also be associated with notions of fatalism, superstition, and pagan augury. Crusade narratives therefore employed discussions of signs to distinguish between legitimate and illegitimate means of understanding divine intent and to "embed a particular event within sacred history" (133).

Monastic chroniclers of the First Crusade embellished the Gesta Francorum with signs and wonders compatible with their apocalyptic presentation of that campaign, but Spacey notes that positive signs rarely occurred in other crusade accounts, with the exception of the De expugnatione (139). Sometimes signs were employed to indicate divine condemnation of the crusader's sins or forebodings of disaster. This was particularly true for narratives of the Second and Third Crusades. Despite a credibility based on its attribution to non-Christian sources and dissemination throughout the Mediterranean world, the famous "Toledo letter" nonetheless saw its contents, as with the prophecies of Joachim of Fiore, edited in response to contemporary events. Prophecy was therefore "plastic" and could also be used to justify otherwise contested crusades, as occurred in the prophecies invoked to retroactively sanction the crusader capture of Constantinople in 1204.

Spacey's allusion to Garnier of Rochefort's referencing Sibylline prophecies in his sermons is a welcome nod to a rich seam of homiletic material on prophecy and signs. One wishes that she had also included Garnier's discussions of the differences between dreams and visions in his Adventine sermons (PL 205: 585-99), a common locus for the discussion of signs and wonders. This monograph nonetheless accomplishes much and will doubtless become a point of first reference for those investigating the relationship between the miraculous and crusading. This reviewer anticipates that either Spacey herself or others will soon extend this study to explore later contested crusades (political crusades, anti-heretical crusades), and perhaps also the treatment of miraculous apparitions accredited to the proto-crusading activities of Constantine, Heraclius, Charlemagne, and to other campaigns seeking the status of a just or holy war.