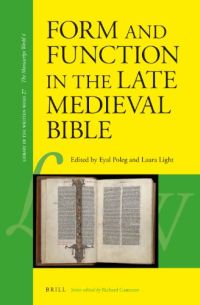 A major contribution to recent advancements in medieval biblical studies, this volume focuses on a critical stage of the development of the "Bible" as we conceive of it today: as a widely produced, single portable volume (pandect) comprised of the Old and New Testaments with a codified order of biblical books divided into predetermined chapters. Although until recently Late Medieval Bibles have attracted little scholarly attention, the emergence of the "Paris" Bible (characterized by a specific order of books, chapter divisions and associated reference tools) and the pocket or portable Bible was intimately tied to larger historical developments, including the commercial book trade and vibrant university environment of Paris and northern Italy and the advent of the mendicant orders associated with revitalized pastoral care. The editors of the present volume have coined the term "Late Medieval Bible" (LMB) to describe a group of Latin and vernacular Bibles copied between circa 1230 and 1450 across Europe which shared important features despite their variety of origins and uses (3). One of the most popular book forms of the medieval period, their single-volume and often compact format would transform the way in which the Bible was used and perceived by ecclesiastical and lay audiences, and their widespread diffusion illuminates the movements and changing tastes of scribes and artists, students and masters, lay and ecclesiastical patrons, monks and friars.