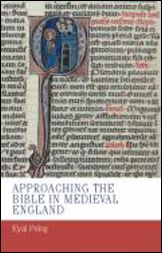 "A certain degree of chutzpah is necessary when writing a book about the medieval Bible" (xvii): this is Poleg's upbeat to his study on the mediation of the Bible in medieval England. His research questions shift the focus of scholarship from the study of the "naked text" of the Scriptures to issues of transmission and impacts. (1) In this respect he joins the late 20th-century scholarly turn announced by the school of médiologie, which has long advocated a theoretical framework "for understanding how meanings are transmitted within cultures" (3).

The approach to the cross-community (but not necessarily cross-cultural) mediation of the Bible is inseparable from Brian Stock's notion of "textual communities", i.e. groups brought together as much by the shared understanding of a text as by its transmission and reception (3). Poleg considerably expands this key concept. He looks at both sides of the "mediated divide" (4). He considers textual communities from the perspective of both the mediators, shaping the text and the media of the Bible, and of the mediated, whose needs affected the process of transmission. Poleg's four case studies illustrate the dynamics of the creation of textual communities through the (re)use, performance, representation and medium of the biblical text.

Each of the four chapters of the book is devoted to a specific instance of the complex process of biblical mediation. Chapter 1 discusses the biblical echoes of the Palm Sunday liturgy in late medieval England with careful reflection on text, performance and liturgical paraphernalia. The dramatic core of the biblical narrative of the Entry into Jerusalem is contrasted to its eventual liturgical uses as documented by the diocesan constitutions, church murals and liturgical commentaries of late medieval England. Poleg also involves a unique Middle English text, the speech of Caiphas the prophet (BL, Sloane MS 2478) to illustrate an extreme example of deploying biblical and liturgical allusions for comic effects (37-9).

Chapter 2 presents a group of manuscripts that gained quasi-talismanic significance by their use as oath-books. Their contents remain speculative for two main reasons: firstly, their appearance was more central to their sacrality than their contents, and secondly, only a very few manuscripts can be identified that were applied as oath-books.

Chapter 3 is engaged with the study of the structure, format and paratexts of the new type of Bibles emerging at the turn of the 12th-13th centuries: the pandects. The author presents the ecclesiastical and social contexts that brought this innovative and easily "searchable" Bible to life. Poleg demonstrates the uniformity of these biblical manuscripts in terms of layout, rubrications, chapter numbers, running titles, and the relation of the paratexts to their uses in liturgy and preaching. He explains the apparent contradiction between the uniformity of the pandects and the diversity of the Psalm inscriptions: "[T]he rubrication of superscriptions did little to assist most medieval readers. In fact, the appearance of the superscription was probably unintentional. The superscriptions stretched the limits of devices used by medieval stationers, and their presentation as rubrics came from a lack of other efficient means (apart from rubrics) for signalling out such extraneous texts." (137)

Chapter 4 is a case study of the use of the Bible in preaching. Poleg breaks with the formerly prevailing consensus maintaining that the incorporation of the Bible in sermons served the end of acquainting people with the Scriptures. He revisits the text of three late medieval Advent Sunday sermons by three preachers active in England: the first written by Odo of Cheriton before 1219, the second by an unknown, probably Franciscan, friar in the 13th century, and the third by Augustinian friar John Waldeby in the later 14th century. As the Gospel lesson of Advent Sunday (Mt 21:1-9) underpins the Palm Sunday liturgy, and all the three sermons incorporate the pericope, the textual analysis of this chapter spectacularly combines the perspectives of the earlier chapters.

It is not difficult to perceive several narratives in Poleg's book. The case studies are framed by analyses of biblical mediation in the Palm Sunday liturgy and in texts allegorically commenting on Palm Sunday (Chapters 1 and 4). Chapters 3 and 4 also form a coherent series. The former deduces assumptions about the uses of late medieval Bibles from the layout of the manuscripts, while the latter digs up evidence from three thematically related sermons to prove their preachers' reliance on the paratexts of the pandects. Poleg understandably resigns on a more encompassing narrative, which, as he envisions, could be created as a result of the joint efforts of interdisciplinary scholarship.

Nevertheless, Poleg constantly indicates the possible trajectories of the study of biblical mediation. He bridges the distances between "area scholarship" and involves fundamental French studies (David D'Avray, Père Bataillon, Nicole Bériou, Gilbert Dahan) in the predominantly Anglo-American bibliography. He also points out the intersections of his own research with more distant fields of the interdisciplinary matrix of medieval studies. His reading of the dramatic potentials of the Palm Sunday liturgy valuably contributes to the scholarship of liturgical drama (43). Or the discussion of oath-books raises inspiring questions for Lollard studies: "Could it be that what incurred the wrath of Lollards was not the theoretical problem of swearing on the Gospels but the more concrete nature of the oath-books they were presented with?" (92)

The book is both a series of concentrated case studies and an attempt to stretch the horizons of an overall narrative as wide as possible. Only in one aspect do I feel that the conceptual coherence of the work is jeopardized. Chapter 2 makes the notion of biblical mediation very abstract. Poleg transfers the notion of textual communities to a special case of mediation where actually no text or interpretation is mediated. The talismanic books gained significance for the respective communities due to their common appreciation as sacred objects. Poleg discusses customs pre- and postdating the Middle Ages and pursues the very slow transformation of attitudes to talismanic writing. Poleg insists on the talismanic mediation of books both as physical objects and contents, whereas many of the recorded instances actually emphasize the magical power attributed to the letter or to a text fragment, but not to the text as a meaningful message.

Poleg experiments with a reader-friendly (at times surprisingly colloquial) presentation of his research. He helps the reader with both the conventional apparatus (indexes, coloured and black-and-white illustrations, musical notes, a table summary of the late medieval Bibles), and less conventional techniques of addressing the reader with asides (133) or flow charts (16-7 and 159). Chapter 3 combines the palaeographic survey of the late medieval Bibles with statistics. But the random choice of 56 manuscripts from a much larger group renders the statistics accidental. In attempting to create a new form of scholarly communication, Poleg displays some unease with balancing the evident, the necessary background and the novelty. Occasionally, some of his observations are too obvious for the scholarly readers, as e.g. the significance of the crucifix in late medieval devotion (43), and may derive from an intention to involve a less professional audience. On the other hand, the discussion of Chapter 3 with a less cautious provision for explaining technical terms would exclude this type of readers. In the palpable endeavour of adapting the book to the needs of a newer generation of students of the Middle Ages, the Latin quotations were slightly neglected. Numerous typos disturb the reading of these passages (16, 28 and 45: end of the antiphon is missing below the score, 31, 77, 204).

Eyal Poleg's book is a valuable study of late medieval biblical mediation and a gold mine of the implementation of theories of cross-community textual transmission in practice. The author successfully challenges the monolithic concept of biblical knowledge and the clergy's monopoly of biblical mediation in the Middle Ages. The four case studies undermine the assumptions about "the control embedded in biblical mediation and the existence of an unmediated biblical text" (203). Poleg convincingly demonstrates this, and never ceases to ask new questions, which is why this study is worth being continued.