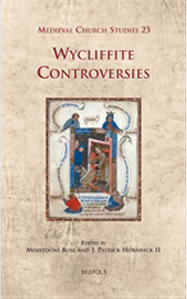 The volume is the publication of the papers delivered at the conference "Lollard Affiliations: Historical, Literary, Theological", held at Oriel College, Oxford (2008). It is unique in the sense that it is representative of an entire branch of scholarly research: Wycliffite studies. While scholars are still split on how to refer to the object of their investigation, undoubtedly the study of late medieval English dissent whose ultimate source is John Wyclif has gained an established status in medieval studies. The lack of an overall agreement on whom and what to call "Wycliffite/Lollard" has never been taken as a sign of misrouted scholarly investigations. Fiona Somerset's "Afterword" reassuringly claims that "there is no room to disagree with this bedrock common ground: lollards defy the established Church, and this defiance is what makes them lollards." (326)

Nomenclature, also a major issue of the editors' review of different scholarly foci, still remains heterogeneous. There seems to be an intuitive conviction that under whatever names Wycliffites and their texts are labelled (l/Lollard, Wycliffite, heterodox, dissenter/dissenting, or heretic), they describe largely overlapping realities. Andrew Cole's criticism of the arbitrary uses of terms is recalled in footnotes by Shannon Gayk and Robyn Malo. "One of the clichés of Wycliffite studies is to say, typically in a footnote, that 'the terms "Wycliffite" and "lollard" will be used synonymously.' We can now reject this position as an error because it sustains a critical language that is anything but." [1] Footnotes have remained, synonyms have multiplied, but all this in the hope of the editors that their deliberate refrainment "from prescribing uniformity of practice" (2) would lead to fruitful critical enquiries and scholarly conversations.

We can see the first fruits of this editorial hope. The footnoted definitions provide a good basis for contrasting the various concepts and approaches that constitute the idea of a Wycliffite or lollard for a scholar. A second fruit of the volume is scholarly conversation in the broadest possible sense. Perhaps due to the intricacies of terminology and the many recent turns in the study of medieval dissent, the papers are very reflexive on the discourses that have shaped the major concerns of current Wycliffite studies. We witness critical enquiries in progress, in which authors of "long-established scholarly evidence" (5) break new ground. Anne Hudson, whose Premature Reformation [2] has become a point of reference, provides an excellent case for asking new relevant questions about people who resist any attempt to classify them as a monolithic group. The shift from conceptualizing orthodoxy and heterodoxy as binaries to interpreting them as a continuum underlies most other studies of the volume. Yet another fruit fulfilling the editors' expectation is that the study of Wycliffite controversies has engaged in multiple dialogues with larger scholarship. This volume is conceived to be read together also with books revisiting the phenomena of dissent and reform in late medieval England. [3]

Contexts, however, may also introduce new dividing lines in scholarship. Peter Marshall's demonstration of the changing biases of historians of the English Reformation in Wycliffite studies also reveals how a reflexive scholarly community can (and does) break out from the "ideological football" in historiographical debates that "seldom engage with the textual record they have left behind." (319) The very deep textual engagement of scholars with literary, pastoral, parabiblical and theological texts, which is beautifully exemplified by several studies of this volume (Kantik Ghosh, Ian Christopher Levy, Alastair Minnis, Matti Peikola, Mary Raschko, Mary Dove, Edwin Craun, Helen Barr and Patrick Hornbeck), attest to the inherently interdisciplinary nature of Wycliffite studies. Where, however, the emphasis is to be put when conceptualizing these studies in the dichotomy of the literary and the historiographic, is a dilemma to count with, as Ian Forrest's study posits: "The concerns of literary scholarship have outweighed those of historical research, leading to the relegation of sociology, economics, and the historical context in favour of a more restrictively textual perspective." (134)

While some authors raise questions and discuss how scholarship has been confronted with them (as do Ian Forrest and Peter Marshall), others elaborate on possible answers. Maureen Jurkowski's study of "Lollard networks" relies on an extended corpus of sources to uncover the channels of interaction, as well as the stratification of a socially distinct group. To ask what sense of a collective (local, regional or supra-regional) identity these people maintained (as does also Patrick Hornbeck), and to ask what common religious and social practices they pursued according to the testimony of texts (as do Robyn Malo in her study of the Wycliffite cult of shrines and relics, and Mary Dove and Matti Peikola in their analyses of the concepts of the Wycliffite Bible and its different uses) are complementary ways of reconstructing a socially and religiously definable group with the consideration of the most possible factors affecting their identity.

Wycliffite studies, thus, seems to move towards the study of medieval identities - both personal/collective and textual. This shift will have to incorporate notions of anthropology, social, religious and cognitive psychology more vehemently, as attested by the pioneering experiment of Rob Lutton. Also what needs to be speculated is not only what the sources reveal about the collective selves in a polemical context (i.e. what the Wycliffites thought of themselves in contrast to the orthodox other, what the Wycliffites thought of the other in defence of themselves, and vice versa), but also how these identities "silently" shaped each other when there was no obvious polemical context. Helen Barr's reading of an underlying and "haunting" heterodoxy behind the Digby Lyrics may provide inspiration and methodology for this process. I am sure that a lot of other texts, so far indifferent for Wycliffite studies, e.g. medieval drama, can be used to detect emerging and transforming Wycliffite identities also outside controversies.

Finally, let me hope together with the editors that this edition will bear fruit both inside and outside the circle of scholars of lollardy. I also wish that some dilemmas of research that may easily be misread as either-or alternatives (literary vs. historian, historicist vs. formalist, form vs. context) will find a frame in which all these aspects can be synthesized.