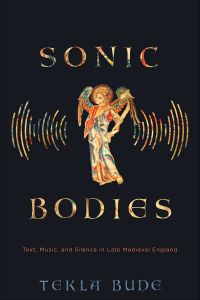 According to its intimately confessional "Acknowledgements", Sonic Bodies is constituted by the author's "serial losses", at the same time "comprised of their presence" (x). The author's first book joins the burgeoning field of sound studies in medieval English literature, represented by the works of Andrew Albin, Adin Lears, and Katherine Zieman.

Bude investigates the multiple ways in which late medieval English texts embody sonic experiences through processes of reading, hearing, evoking, and performing. She establishes the concept of sonic body to "challenge normative conceptions of embodiment and musicality" (6). Her analysis extends the notion of embodiment beyond "eidetic forms" (6) to sonorous/auditory manifestations inscribed into texts. "Sonic bodies" becomes an umbrella term for "manifold and ever changing" (6) phenomena, the author admits, and the various case studies of the book do not help to refine the initial and impalpably vague definition either.

Following the Introduction, the book discusses the co-emergence of sound and (textual) body in six chapters. The first four constitute a more coherent unit, as they discuss sonorous expressions of the mystical experience. Chapters 1 ("Musica Celestis and Canor: Angelic Song in Speculative Music Theory and Rollean Mysticism") and 2 ("Touching Music: Walter Hilton, Angels' Song, and Synaesthesia") revisit the nature of canor [heavenly music] in the mystical experience of Northern English mystic Richard Rolle, as well as Walter Hilton's cautions against Rollean song. Chapter 3 ("Attending to The Boke of Margery Kempe") discusses the cyclical pattern of silence and crying in the mystical autobiography of Margery Kempe. Chapter 4 ("Music, Amicitia, and Carthusian Mystical Diaries") turns back to Rolle as a major inspiration for the Carthusian spiritual diaries of Richard Methley and John Norton, and proposes that the shared sonic expressions of the two authors and the parallelisms between the two manuscripts containing their writings can be explained by the intimate friendship that also resonated in their texts. This chapter is completed by an appendix illustrating the "contiguities" between the two manuscripts. Chapter 4 is perhaps the most precious contribution of the book to any aspect of medieval English studies. It provides new contexts to our scarce knowledge of the late-fifteenth century Carthusian authors who have received little scholarly attention so far.

The last two chapters explore the sound dynamics of William Langland's and Geoffrey Chaucer's poetry. Here the author's interest obviously follows different paths. Chapter 5 ("Piers Plowman, the Sound-Object, and the Singing Community") conceives of Langland's allegorical poem as an early Rabelais-an experiment with the "objecthood of the sound" (118), manifest in a textual strategy that "transforms visual experience into sonic experience" (123). While Bude's observations support her and Lears's claim that meaning in Piers Plowman is based on a sonic ground, her arguments point out common features of medieval rhetoric, such as the application of oral/aural verbs for reading and writing (123), characters without prior introduction giving voice to their own presence (130-131), as well as the universal fact that names recorded in a manuscript not only occupy visual space but also hold "the aural equivalent of space" (132), even if Langland's multiply hyphenated character names represent excessive examples.

Chapter 6 ("Disablity, Music, and Chaucer's Advental Bodies") argues that in Chaucer's poetry "the body-disabling power of music" becomes most often "a site of poetic potential" (146). The chapter presents instances of incapacitated musicality in The Canterbury Tales and Trolius and Criseyde and of the deconstruction of musicality in Chaucer's short lyrics as an overall tendency in his writing. Bude proposes that "[i]n Chaucer, sonic embodiment functions as a disabled body because it is presented as a constant site of delay and disjointed temporality" (146).

The argument of Chapter 6 evokes the initial claim of the book, formulated in the Introduction. In her commentary on Jacobus Leodiensis's Speculum musicae, Bude maintains that Jacobus "hears the ars nova [compositions] as noise in part because he imagines the bodies of its singers as animals" (2). This claim is, however, not borne out by the textual evidence provided in the Latin original. Jacobus compares sounds to animalistic noise, but the singers are not reconceived as animals. The most outstanding musical composition of the English Middle Ages, the "Cuckoo Song" ("Svmer is icumen in") with its religious version in BL, Harley MS 978, fol. 11v, unfortunately absent from the book, could nuance the claims ascribed to Jacobus.

Laxity in the interpretation of the sources appears in other parts of the book too. The first exposition of the Rollean bodily and spiritual sensations are followed by quotes that emphasize the exclusively physical nature of heat, sweetness, and melody (23). The suggestion that Rolle intended to "sooth[e] the mystic's physical body into a sleep" (23) is derived partly from the misrepresentation of canticum [...] quiescentes, which is not one noun phrase, as the plural adjective quiescentes cannot modify the singular noun canticum. "Resting song" (24) is thus a mistranslation of the original Latin sentence Contemplativi capiunt canticum quiescentes (188) [Resting contemplatives receive/sing a song]. An important paraphrase illustrating Rolle's use of the language of music theory (25) does not clarify whether and where Rolle uses the Latin terms given in parentheses.

Furthermore, the argument of Chapter 2, perceptibly biased against Walter Hilton, blames Hilton for his sincere admission to his own ignorance of angelic song (32), which is just the condition humaine of any mystic (cf. the author of The Cloud of Unknowing). The chapter mistakenly suggests that Hilton directly criticized Rolle (33). Hilton was very suspicious of bodily sensations in the mystical experience, but he did not name Rolle. Finally, Chapter 3 does not resolve the tension between the claims that there is no knowable regularity of the pulsation of sound and silence (69) on the one hand, and that Margery Kempe ultimately "champions silence and noise" (89) whose alternation is beyond her control on the other.

The laxity in small details is, however, counterbalanced by the broad horizon of the book combining musicology with literary studies. Music and sound theory, both medieval and modern, also enables the author to relate to modern discourses of gender, disability, race, and aesthetics. In spite of my critical notes concerning translation, I share the author's appreciation of the excellent Latin translations of Andrew Hicks and Elizabeth Lyon.

Just as Bude's book opens with personal confessions, I will conclude on a personal note. As a non-native English reader, I have found the language of the work intriguing. While I may not be able to come to terms with the necessity of some new derivations (where old ones entirely suffice), such as "manuscriptival", "intersubjectival", and "pronomial", I certainly felt the thrill of (my) first encounter with some rare or exotic vocabulary, such as "curmudgeonly", "prodromal perception", "thalamal space", or "methexic power". I trust native English readers to decide over the potentials and the stylistic effect of these phrases.