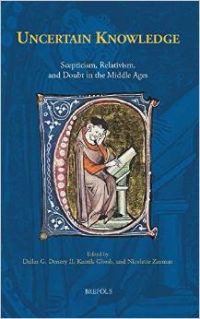 Sodalitas is my spontaneous association with this collection of essays, which grew out from an intensive interdisciplinary research project and workshop held in 2011 at King's College, Cambridge. I would be tempted to use the word "fraternity" to describe the palpable intellectual fervour I can almost picture in the back stage, were I not aware of the fact that nine out of the thirteen contributors are female. The process in which a representative company of contemporary scholarship of medieval intellectual history dissects the primarily male discourse of uncertainty is itself a most intriguing (and perhaps unintended) outcome of this academic endeavour.

Gender is certainly not a voice in the polyvocalism of Uncertain Knowledge. Among the numerous medieval authors addressed, only Christine de Pizan, one of the protagonists of Mishtooni Bose's "Vernacular Opinions", represents medieval women's self-positioning vis-à-vis doubt and uncertainty. To this, we may add the few female literary characters from romances, courtly lyrics and Chaucer's works (Karen Sullivan's "On Recognizing the Limits of Our Understanding: Medieval Debates about Merlin and Marvels"; Helen Swift's "The Merits of Not Knowing: The Paradox of 'Espoir certain' in Late Medieval French Narrative Poetry"; Nicolette Zeeman's "Philosophy in Parts: Jean de Meun, Chaucer and Lydgate and Hester Goodenough Gelber's "Laughter and Deception: Holcot and Chaucer Remain Cheerful"). True that we see medieval women mostly in a struggle for some religious and spiritual certainty, and the editors make it clear that the focus of the volume is "on doubt in the realm of epistemology rather than faith" (1). Without wishing to articulate further implications of my gender agenda here, I believe that the implicit or missing aspects of this investigation of uncertain knowledge outline a broader intellectual history.

Many of the essays indicate that the analysis of medieval dichotomies of certainty and uncertainty, truth and seeming truth, perception and reality, knowledge and opinion are embedded in the much broader dimension of the history of European civilization. These essays grasp watersheds, continuities and the (early) modern repercussions of the medieval conceptualizations of uncertainty. Dominik Perler's discussion of XIVth-century debates on sensory illusions deploys modern examples (75, 82) with the suggestion that the language of science is in constant change, but the questions of epistemology linger on. Dallas G. Denery II's "Uncertainty and Deception in the Medieval and Early Modern Court" juxtaposes uncertainties shaping ethical practices and rhetoric in the XIIth-century and the early modern courts. He concludes that "the differences between [John of Salisbury and the early modern writers] seem less significant, less dramatic, than what they have in common and these commonalities may reveal real continuities. If this is the case, then the real outlier is Scholasticism itself, a sudden and overwhelming intellectual phenomenon, at odds with a long-standing rhetorical tradition that continued to endure, even if, for a while, overshadowed by its new rival." (33)

John of Salisbury's Policraticus' indebtedness to the Ciceronian rhetorical tradition connects Denery's essay with Rita Copeland's analysis of the doubts about the classification of Aristotle's Rhetorics by late medieval commentators and translator William Moerbeke. Copeland's analysis of the oscillations between viewing rhetoric as part of politics or as a sister science of dialectic may be seen as a case study in the light of Eileen Sweeney's "New Standards for Certainty: Early Receptions of Aristotle's Posterior Analytics." Sweeney maps the debates surrounding the XIIIth-century reception of Aristotle, in which two clashing mentalities anticipate "much later conflicts between science and the humanities, what William James called the 'tender-' versus the 'tough-minded' approaches to the world [...]. The tough-minded tout the superiority of science because of its objectivity and rationality, while the tender-minded defend the non-scientific disciplines on the basis of the greater subjective fervour and affective adherence they produce." (59)

The authors' alertness to the wider implications of their conclusions for a European intellectual history revises faded narratives and categories. Sarah Kay's "Medieval Bêtise: Internal Senses and Second Skins in Richard de Fournival's Bestiaire d'amours" discovers the potentials of generic transgressions, as a religious genre turns into a play combining natural philosophy and dark humour. Kay claims that a second layer of the work's discussion of sense perceptions and imagination is the way in which the materiality of the book involved the reader in touching the text (327). Lesley Smith's "Uncertainty in the Study of the Bible" surveys how uncertainties (of the text, the literal meaning, authority and answers) construct a new methodology for the study of the medieval Bible. Swift's essay deconstructs the love topoi of late medieval French narrative poetry, and reveals Jean Froissart's and Alain Chartier's appropriation of epistemological issues for poetic uses. Gelber and Zeeman present other aspects of the dialogue between late medieval poets (Chaucer and Lydgate) and "their scholastic contemporaries" (234). Christophe Grellard's "How Is it Possible to Believe Falsely? John Buridan, the Vetula, and the Psychology of Error" explores the cognitive attitudes of the educated and uneducated not in their encounters, but in the theoretical model of John Buridan.

The essays' focus on experiments shaping new intellectual mentalities is balanced by Kantik Ghosh's "Logic, Scepticism, and 'Heresy' in Early Fifteenth-Century Europe: Oxford, Vienna, Constance". Two case studies of late medieval heterodoxy (Richard Fleming and Jerome of Prague) remind the reader of the increasing risks of intellectual discourses in the period. Ghosh draws our attention to "the changing valence of academic speculative thought at a time when such speculation was increasingly implicated in extramural, often vernacular, controversy across a range of European cultures" (276).

The volume overarches walls separating dichotomies of perceptions, such as "institutional and non-institutional, ecclesiastical and lay, Latin and vernacular" (1). It also opens up the spatial and chronological frames of medieval intellectual history. The Western European focus common to such studies is surpassed by Ghosh's incorporation of the trial of Jerome of Prague. The volume reflects not only on the continuation of the Classical legacy in medieval Europe, but also on the impacts of medieval discourses on later periods. Most of all, however, the book successfully links the separately authored essays and initiates the reader into a real dialogue. The complex strategies in which the essays read each other make the few editorial shortcomings (misspellings in the Latin texts, repetitions, and a misplaced index in the middle of my reading copy) a minor issue. The volume is, without doubt, an inspiring thought experiment and an example of the creative potentials of the contemporary scholarship of medieval intellectual history.