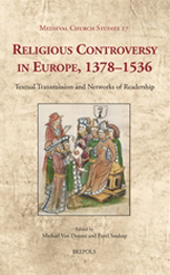 The volume grew out from a 2011 conference held in Prague on the transmission of controversial texts. Its purpose is to investigate the impact of texts reflecting and spreading religious controversy on group formation. The collected papers discuss how the controversies were "embedded in the local circumstances of communication and textual transmission" (8) and map up continuities between various controversies. The volume is a rich collection of case studies and theoretical experiments joining the scholarly discourse of the "sociology" of texts.

The twelve studies of the volume overarch the period from the beginning of the Great Schism to the establishment of the Church of England. While the volume avoids a dominant English view of religious controversy, it is not clear why 1536 has been chosen as the conclusive date. The beginnings of the English Reformation do not receive much emphasis, while papers closest to the end point of the time frame (Benedetti and Barral-Baron) are more engaged with continental Reformation. Moreover, Benedetti's most exciting account of the afterlife of the pocket books of Waldensian itinerant preachers pursues their history through the early modern uses of the manuscripts until the Piedmontese massacre of the Waldensians in 1655.

The contents of the volume crystallize around four major themes: controversies created by the Great Schism, Wycliffite/Lollard controversies in England, the Hussite heterodoxy in Bohemia, and Waldensians. While several other heterodoxies could be added (e.g. excessive forms of religious zeal, Free Spiritism, or alternative eschatologies), the volume admittedly does not explore controversy as varieties of polemic between the mainstream and the non-mainstream. Instead, it grasps the idea of controversy in the dynamics of textual transmission.

The editors did not create thematic strands; the order of the studies does not seem to follow any apparent scheme. I perceive this as an attempt to free the texts under scrutiny from their limited local contexts and to encourage the readers to discover commonalities in the formation of textual communities. A shared motif is unarguably the transgression of the walls of academia by means of texts reaching out towards a larger non-academic, but not necessarily less informed, readership.

R. N. Swanson's opening study revisits the well charted territory of academic responses to the Great Schism not to tell a twice-told tale, but to propose a new methodological framework to assess the "real significance of the schism as a controversy [...] for the contemporary universities and for their members as potential participants in the debates" (20). His analysis of archival material is productively inspired by the sociological theory of networks. He also demonstrates that the nature and extent of surviving materials do not always explain the dissemination of academic material to "unintended contexts and locations" (33) exclusively with the notions of strong and weak ties. Marie Barral-Baron's closing paper reflects on the problem of ties. Her discussion of the consequences of Erasmus's relentless textual criticism is a splendid example of the involuntary impacts of scholarly discourse on extramural religious mentalities. Thus, the volume ends on a note that the dynamic of religious controversy could be shaped by accidental and unforeseen factors that resist rigid theoretical models.

Transgressing the academic boundaries is also the primary concern of Daniel Hobbins's paper, discussing the patterns of distribution of Jean Gerson's works. Hobbins's meticulous mapping of the distribution mechanisms of the manuscripts convincingly answers the question why a discernible change in the dissemination patterns of Gerson's works happened in 1423. A most valuable part of the paper is the series of original maps, made by Hobbins and James Wade, showing the routes of dissemination. Some mistakes, however, remain: Map 7 locates Munich on the Danube in Austria, and it contradicts the claim that Gerson's treatise on Joan of Arc never reached the Rhineland (see Cologne on the map).

Further contributions to the academic vs. non-academic divide shaping controversies is represented by Kantik Ghosh's paper, which contrasts two concepts of communication in which the one open to encounter the extramural reception of learned discourse is represented by Bishop Reginald Pecock. The stakes of Pecock's vision of theology and of his insistence on challenging Lollards, his heterodox opponents, with their own method of reasoned arguments has received considerable scholarly attention, carefully reviewed by Ghosh, which I would complete with my contributions to the Pecock controversy. [1] An interesting point is raised in the heretication process of Pecock: the bishop was aligned with "Mahomet" - a motif resonating with Soukup's study. Soukup shows an interesting case of a religious controversy substituting another one: academic invectives against Muslims became coded attacks against Hussites. Soukup does not find traces of this invective outside academia, which is an interesting contrast to the late medieval English literary scene, where the religious other appears as disguised heterodox Christian (e.g. The Croxton Play of the Sacrament).

Pecock's Lollard opponents take shape in several essays. Anne Hudson casts light on a puzzling and enigmatic contrast between the apparent lack of Wyclif's opera omnia in England and the existence of such in Bohemia. Fiona Somerset sets out to identify the elusive concept of lollard textual culture, emphasizing that many aspects of its "generative energy" (76) overlap with those of mainstream religious texts. She still considers systematic revision and motivated variation as more characteristic of lollardy. She identifies some hallmarks of lollard textual strategies, such as interpolation, recasting mainstream genres, and providing alternatives of mainstream works. But these are pervasive also in non-lollard religious writing. [2]

Even though overall heterodox textual strategies may not yield easily, Georg Modestin, discussing a record of the Waldensian controversy, points out that certain idiomatic phrases and a "biblicist" argumentative strategy provided linguistic codes for the contemporaries to identify members of the in/out-group. The dilemma of a linguistic identity of heterodox groups resonates in Lucie Doležalová's analysis of medieval Bohemian manuscripts containing Utraquist (Hussite) texts. Her conclusion is the opposite of Somerset's: the heterodox "concern for approaching the public [...] is not exclusively a Hussite specialty but a more widespread tendency at the time" (129).

The motif of textual strategies and the imitation of Wyclif outside England connects the studies of Wycliffite issues with Pavlína Rychterová's paper discussing Jan Hus's translation methods and uses of Wyclif. The author concludes that translation and the particular translation strategies of Hus positioned controversy "beyond the restricted discourse of scholarly university debate [...] capable of bringing about veritable social change" (247).

[1] Tamás Karáth:'Altum sapere': The Risks of the Authority and Responsibility of Knowledge in Late Medieval English 'Extramural' Literary Texts" (unpublished PhD Dissertation, Eötvös Loránd University, Budapest 2008) and Id.: Vernacular Authority and the Rhetoric of Sciences in Pecock's The Folewer to the Donet and in The Court of Sapience, in: After Arundel: Religious Writing in Fifteenth-Century England, hg. v. Vincent Gillespie, Kantik Ghosh, Turnhout 2011, 285-304.