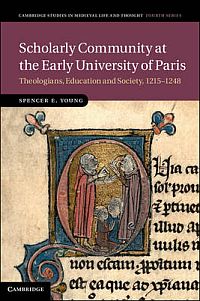 Before the late John Baldwin published his magisterial work on the circle of Peter the Chanter in 1970 and Alexander Murray and Richard Southern made larger claims for the social influence of university-trained intellectuals, the perception of medieval theology at Paris tended to be dominated either by the legal history of the university as an institution, by controversial scholars such as Peter Abelard, or by theologians whose works were considered part of the heritage of a religious order, such as Hugh of Saint-Victor, Albertus Magnus, Thomas Aquinas, and Bonaventure. The popular perception of intellectual life in the Middle Ages remains dominated by either a focus on mystical theology or by a focus on the "high medieval" synthesis of reason and theology foreshadowed by the twelfth-century renaissance (with the "rediscovery" and translation of Aristotelian philosophy and shortly thereafter, the libri naturales) which supposedly culminated, after an presumed unfortunate hiatus, in the late thirteenth-century Summa theologica of Aquinas.

However, recent scholarship on canon law and pastoral and moral theology has shifted the emphasis away from an insistence on the "enduring" intellectual contributions of medieval theology and philosophy to "Western civilization" towards an emphasis on understanding medieval intellectuals' preoccupation and dialogue with contemporary social, economic, and moral concerns. Studies of genres other than summae, including quodlibets, pastoral materials (including confessor's manuals and sermon collections), and biblical commentaries have illuminated the ways in which masters engaged in what they viewed as their three main raisons d'être: lectio (teaching), disputatio (debate), and predicatio (preaching). Scholars have been quietly mapping out the range of scholastic works from the early to mid- thirteenth century and have published biographies of individual scholars (and in the case of John Baldwin, William Courtenay, Natalie Gorochov and Spencer Young, prosopographical studies of known masters at the university in specific periods) as well as editions of key works, including William of Auxerre's Summa Aurea, and the sermons published or described by Franco Morenzoni, Nicole Bériou, and Marie-Madeleine Davy. Yet we still read the early thirteenth century period at Paris through a glass darkly; many key sources lack critical editions and must be read in manuscript, while institutional documentation remains thin or informed by later disputes.

Acknowledging, in the best medieval tradition, that he stands on the shoulders of giants, Spencer Young nonetheless makes important synthetic claims for the impact of a "lost generation" of Parisian theologians (c. 1215-c. 1250 CE) active between the periods dominated by Peter the Chanter's circle and the solidified influence of the mendicant orders. Young convincingly argues that it was this "Parens scientiarum" generation which saw the formal institutionalization of the University of Paris and that their contributions deserve to be considered in a collective manner. However, the opinions these masters espoused and the careers they followed were polyphonal rather than univocal. Their heated debates on the merits of teaching theology as a long-term vocation rather than viewing theological training only as a stepping-stone to a secular, ecclesiastical, or pastoral career outside the schools proved essential for multiple important legacies detailed by Jacques Verger. These included the creation of a new identity for the university master of theology as guardian of orthodoxy; the formation of a standard curriculum; and the development of distinct pedagogical genres (including summae, commentaries on the Bible and Peter Lombard's Sentences, and the sermons and quodlibetal debates which provided occasions for interaction between the university and the surrounding community). Young rightly stresses that the response of the theology faculty to the initial entrance of the mendicant orders in Paris ought not to be retroactively colored by the secular-mendicant dispute of the 1250s. Many secular scholars in fact welcomed the mendicants' arrival, perhaps preconditioned to view them favorably by previous generations of secular masters' fruitful interaction with religious orders including the Victorines, Cistercians, and Praemonstratensians.

Young begins by delineating the tensions which accompanied the emergence of the new institution of the University of Paris and the ways in which theology masters participated in determining the boundaries and content of their discipline within the university as a whole and in establishing their identity as the authoritative font of orthodox doctrine for all of Latin Christendom. He then examines the variety of careers, allegiances, and divisions within the community of theologians and the extent of their commitment to the university community during the Great Dispersion of 1229-1231. He rightly notes that the theology faculty was also marked by a varied range of responses to the impact of the recently translated works of Aristotle on natural philosopy (the libri naturales) on the study of theology. Theologians' reactions ranged from enthusiastic embrace, to ambivalence, to the position that that Aristotle's works could prove useful in defending orthodox theology against heretical attack.

Young then examines the influence of master William of Auxerre. A fascinating figure who moved in high circles, William represented the university during the Great Dispersion and was nominated by Gregory IX to the commission originally designed to "purge" the libri naturales for use in the schools of Paris (although William died before he could fulfill his commission). As John Baldwin did for Peter the Chanter, Spencer constructs his own "circle" of theologians influenced to varying degrees by William's opinions, based on unedited quodlibetal questions preserved in BnF Ms. Lat. 14726 (now thankfully digitized). He argues that rather than looking through the lens of statutory evidence, papal letters, and the edited works of a few select theologians to assess the impact of Aristotle on the theology faculty, the only way to truly assess the faculty's reaction to and reception of the pagan philosopher's works is to consult a wider range of lesser known texts written before favorable papal intervention in the matter with Gregory IX's Parens scientiarum (1231), a letter probably drafted after conversations with William of Auxerre and other pro-Aristotelian theologians.

Drawing on recent scholarship on pastoral manuals, the vices and the virtues, and the theological and moral issues raised by the monetary economy of the thirteenth century (including prostitution, poverty, and usury), Young also convincingly argues that even the career theologians of the "Parens scientiarum" generation were not locked in ivory towers, but grappled with the social ills of their day. Similar to today's academics, medieval theologians needed to make their activities relevant, which they did by utilizing Aristotelian ethics and natural philosophy to evaluate the parameters and (il)licitness of the redistribution of wealth. Young does real service by examining the "Parens scientiarum" generation's contributions to these topics (which both built on and diverged from the opinions expressed by Peter the Chanter's circle) through original work on material, much of which remains unedited in manuscript form. He also demonstrates a convincing chain of transmission of classroom opinions on almsgiving and the vices and virtues (preserved in summae and quaestiones) to public audiences through quodlibetal debates and sermons. Contrary to the impression given in some literature that pastoral interests disappeared among Parisian theologians after the death of Peter the Chanter, he demonstrates that theologians' appropriation of Aristotle and discussions of what might seem abstruse topics (including the Trinity), were in fact linked to pressing pastoral concerns, including the need to counter heresy and promote the preaching and confession mandated by the Fourth Lateran Council (1215). Theologians' social commentary and moral analysis were precisely what those engaged in pastoral work (including the mendicant orders) needed to advise the faithful.

Young's use of tightly focused topics to support larger claims about the influence of this generation also reminds us just how much work remains to be done on the personal networks of influence, intellectual indebtedness, and legacies of the "Parens scientiarum" generation, not the least their importance as a bridge between the generation of Peter the Chanter and the mendicant orders. For example, he notes that much of the "Parens scientiarum" generation's works have been lost, due to the fact that, as secular masters, they lacked the institutional resources at the disposal of the mendicant orders. Yet many of the surviving manuscripts he cites come from Saint Victor (as does the sermon preached by Philip the Chancellor on almsgiving), leading this reviewer to suspect that the Victorine community of canons regular, lauded by Peter the Chanter's circle as a spiritual oasis in the midst of the often cut-throat competition that marked the early university of Paris, perhaps also served the more prosaic function of reference library, scriptorium, and repository for secular masters' works. Together with recent surveys by Nathalie Gorochov and Ian Wei, Young's monograph should become essential reading for anyone interested in the intersection of intellectual and social history and the evolution of medieval universities.