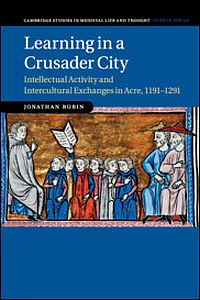 For many decades, the Latin Kingdom of Jerusalem was depicted as an intellectual backwater. Jonathan Rubin quashes this notion by reconstructing Acre's interlacing intellectual communities (chs. 1-2) and by outlining their significant contributions to multivalent discourse in the fields of translation (ch. 3), jurisprudence (ch. 4), and inter-religious dialogue (chs. 5, 6). A useful appendix (176-95) sketches a textual "Acre corpus" of Frankish and Jewish authorship (12).

This engaging book challenges many assumptions and historical models, leading to further queries. Why is it that a port city crammed with refugees, settlers, pilgrims, crusaders, and merchants became such a locus for intellectual exchange and production precisely when Latin control over it was most imperilled (7-8)? Why, despite challenging Joshua Prawer's assertion that a lack of innovation characterized the Latin Kingdom of Jerusalem, does Rubin nonetheless echo Prawer's conclusion that Mamluk troops' capture of Acre (1291) ended intellectual vibrancy and resulted in the mass destruction of texts when at least two Greek manuscripts were preserved as war loot (1, 12-3, 171, 174)? Perhaps we should speak instead of a shift of intellectual loci towards Alexandria, Cairo, or Cyprus, regions with which Acre was already in communication.

Should we reimagine the flow of information around the Mediterranean as multidirectional, with westerners turning to other regions and cultures in search of knowledge (while bringing western intellectual models and texts about the East with them) and then deliberately disseminating "useful" knowledge about the East to western audiences through return travel and textual production and transmission (46-7, 121-3)? Should the concept that in-depth intellectual engagement with religions outside of Latin Christianity occurred only with the establishment of the mendicant orders in the Holy Land also finally be put to rest and is it possible to apply western models for mendicant education to eastern mendicant studia (22-3, 48-57, 126-9)? Did Old French's status as an assimilating and elite vernacular taught to Arabic-speaking Copts and Muslim converts lead to optimism about its linguistic capabilities and its use in fields typically reserved for Latin (as occurred in the Latin Kingdom of Constantinople as well) (71, 75, 83-113)?

Rubin convincingly argues that Frankish authors utilized a body of literature circulating in Acre to create innovative works and that knowledge circulated and cross-fertilized in multiple formats, languages, communities and contexts (8-9, 171). Distance from western universities and lack of patronage meant freedom to innovate, as did the porous nature of intellectual communities and individuals whose careers spanned genres and bureaucracies often imagined as separate (11, 16, 174). His discussion of secular jurisprudence in this context was illuminating, and one wishes it had extended to ecclesiastical courts, which faced similarly disputed hierarchies and jurisdictions. It is interesting to note the prominence of university-educated westerners appointed to or elected as bishops of Acre and patriarchs of Jerusalem (16-21). Perhaps Acre's intellectual creativity stemmed partly from the adaptation of mental paradigms and genres forged in the West (anti-heretical or anti-Jewish debate literature, pilgrimage guides, crusade histories, chronicles) to the peoples, cultures and contexts of the East. The resulting products were then often exported back West, where they sometimes had much greater impact than in the climate where they were originally produced.

For example, Innocent III's request for information on the situation in the East resulted in the Relatio tripartita (20), which at some point was repackaged with Oliver of Paderborn's writings to form the missing "third book" of Jacques de Vitry's Historia Iherosolimitana. This "third book" had a broad western circulation (yet is not included in Rubin's corpus), as did Jacques de Vitry's Historia Orientalis and letters (which are). Oliver's wide-ranging oeuvre is likewise not cited in Rubin's "Acre corpus," nor are other chronicles produced in the army of the Fifth Crusade, even though there is considerable evidence that materials brought from the West (Peter Comestor, Fulcher of Chartres) and acquired in the East (William of Tyre) were shared by Oliver and Jacques, as were the core narratives of the campaign of the Fifth Crusade among their clerical authors, many of whom passed through Acre. [1] One wonders too, if Rubin's cut-off date of 1191 was deliberately chosen to side-step the convoluted production and transmission of texts describing the Third Crusade's siege of Acre (1189-91)?

Rubin does however, argue that there was a concerted push to gather accurate information on eastern Christians post-Hattin (1187), perhaps because of attempts to extend Latin ecclesiastical jurisdiction and find potential allies against Islam in the Holy Land, Egypt, and beyond (this was, after all, the era of hopes for assistance from Prester John or 'King David'). Rubin also depicts Benoit d'Alignan and Jacques de Vitry as motivated to gather and send information on eastern Christians to their western colleagues and rightly points to Benoit's service as inquisitor shaping his approach to eastern Christianity (20, 148-55). However, he fails to note that both Jacques de Vitry and Oliver of Paderborn, who similarly gathered information on eastern Christians and Islam, were both educated in Paris and participated in the anti-heretical crusade, and so were sensitized to variations in praxis and belief. This earlier generation's more tolerant attitude towards eastern Christians may have been shaped by their hopes for military aid and the difficulty of coercing groups not under their jurisdiction (154-5, 161). Conditioned both by eastern realpolitik and their anti-heretical training, Jacques' and Oliver's rating of various eastern Christian groups as potential allies (or converts) would arguably have had much more impact on western than eastern audiences. Contrary to some historians' assertions that western scholars were not interested in or capable of intellectual debate with other religions, Jacques and Oliver were deeply invested, but frustrated by the difficulties posed by inadequate translations for technically challenging concepts such as transubstantiation and Christ's nature, an issue they had not encountered with western heretics (who were familiar with Latin terms) (139).

Among the important contributions of this book is Rubin's evocative depiction of Acre as a communication hub for Jewish scholars from France, Iberia, Iraq, and Alexandria (37-45, 58-61). He outlines significant exchanges between Latin and Eastern Christians (and Jewish communities) both in the form of Frankish clergy living in the Holy Land and visitors from the West seeking knowledge about eastern Christianity and Islam. Rubin also notes the problematic nature of evidence for real and sustained direct intellectual (rather than diplomatic or cultural) exchange between Christian and Muslim communities (45, 172-3). This may be because the "Acre corpus," as presently constructed, consists primarily of texts produced by Jewish and Latin Christian authors, who appear to have preferred, for reasons of safety, accessibility and linguistic difficulty, to question eastern Christian or Jewish communities in communication with communities in Muslim-ruled regions on Islamic beliefs and customs rather than approaching Muslims directly (132-166). [2]

Rubin is absolutely right in observing that in western-authored works, observation-derived and accurate knowledge of basic tenets and practices of Islam often accompanied staggeringly biased and imprecise depictions, due to several factors. Many western travellers carried preconceived notions of Islam from established genres and tropes circulating in Latin Christendom and were writing for audiences also familiar with those works, who were to be reassured of Christianity's superiority and the need for conversion from and/or militant resistance to Islam (114-37). In marked contrast, Rubin's work puts to rest many tired tropes regarding the nature of intellectual life in the Latin Kingdom of Jerusalem and suggests a new model which this reviewer hopes is extended to other regions characterized by intercultural exchange, including Antioch, Jerusalem, Alexandria, and Cairo (10-11, 76). Scholars of Mediterranean, intellectual, and religious history will profit from its fresh synthesis, while certain chapters (chs. 5 and 6 in particular) would benefit advanced undergraduate or graduate students.

[2] Rubin chastised me for failing to previously provide evidence for similar claims. The simple answer is that the cited article's word limit prevented me from doing so and the article which was to lay out that evidence was submitted to an edited volume which was never published. I am returning to this subject with a monograph examining the sources, circulation, and impact of Oliver of Paderborn and Jacques de Vitry's treatments of eastern Christians and Islam.