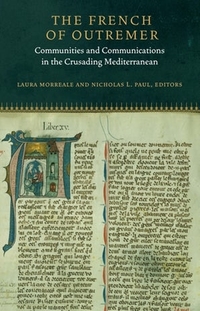 Interdisciplinarity has long been the hallmark of medieval studies. However, by asking some hard questions, the editors and contributors of this volume have begun to bring into dialogue the often highly disparate fields of French language and literature studies and the history of the crusades and Latin (Frankish) culture in the Mediterranean region.

Did individuals' usage of Old French language imply a partial adoption of 'French' identity? Were French-users Outremer a colonialist clique who simply clung to, copied, and adapted imported western literary genres and linguistic developments? Or were eastern Francophones a 'fragmented assemblage' (3) who seized on the French language as a cultural meeting point, producing as well as consuming French literature and thereby shaping and ordering their identities and communities? The complicated pan-Mediterranean lineage of the Old French translations and continuations of William of Tyre's monumental history (and many other innovative works produced Outremer and consumed and adapted in Europe) would seem to support the second model.

As editors, Laura Morreale and Nicholas Paul rightly highlight several major thematic strands that unite otherwise diverse and wide-ranging essays. The unique climate of Outremer's heterogeneous linguistic, religious, and cultural worlds led to cross-fertilization, adaptation, and innovation in both spoken language and written forms. It also enabled the translation and/or re-situation of linguistic, religious, and literary forms from genre to genre, region to region. Language also served pragmatic functions: familial and communal commemoration and (re)interpretation of historical events, representation of power in the guise of coins, place names, histories of and proposals for the 'recovery' of the Holy Land and other regions. These processes accompanied and enabled the construction of a unique 'ultramarine' or 'poulain' identity (10) forged in constant negotiation with other Latin European communities. Interestingly, the volume also highlights the little-known role of the Italian peninsula as a producer and consumer of the French language, both at 'home' and in Italian-influenced regions overseas, including the Morea.

The traditional Old French textual canon excluded texts produced Outremer, although this has changed recently with the publication of reliable editions of key texts and painstaking research on the cultural history of Outremer. However, Laura Minervi notes that historians have only begun to evaluate the usage of French by non-elites, how a lingua franca may have facilitated acculturation between indigenous groups and newer arrivals, and the distinctive characteristics of Outremer French. For example, Alan Stahl's article on the Outremer denier illustrates that even while some early crusaders modelled some of their coinage on French deniers they brought with them, others adopted features of the Byzantine and Islamic coins they encountered Outremer, adapting and commingling European and eastern symbols of authority.

Similarly, Italian scribes adopted French forms common overseas and proved crucial agents for these forms' dissemination, although Italians also hybridized Outremer French forms with other usages they encountered in Occitan and western French manuscripts. As Fabio Zinelli notes, the choice of language could be highly politicized. The Venetian Martin da Canal deliberately utilized Outremer French to resist the intrusion of the western French Charles I of Anjou by rhetorically staking out Venice's political and economic claims in the Italian mainland, in the Latin East, and in the Adriatic and Near East.

Historians have long been frustrated by the complicated production and transmission of Old French translations and continuations of William of Tyre (known as Eracles, Ernoul-Bernard, and the Rothelin continuation) some of which were translated and/or compiled in northern France yet cross-pollinated with copies and continuations circulating Outremer. Produced in northern France circa 1225, Ernoul-Bernard represents one of the earliest surviving examples of French vernacular prose history (53). Philip Handyside and Peter Edbury conclude that the Old French translation of William of Tyre known as Estoire d'Eracles was probably produced near Paris during the Fifth Crusade (circa 1219-1223), yet its creator included material on Outremer he considered necessary for western pilgrims and/or crusaders. Further adaptations were created Outremer and influenced (and were influenced by) 'western' versions of Eracles.

Massimiliano Gaggero similarly urges a thorough reevaluation of the relative value of Villehardouin's history of the Fourth Crusade. The cultural atmosphere of the monastery of Corbie may have molded the accounts of that campaign by Robert of Clari and in the Ernoul-Bernard continuation. Both texts were produced at a time when Old French prose historiography reflected the struggle of the aristocracy in northern France and Flanders against the kings of France; the history of Outremer was shaped by western political agendas.

Angel Nicolau-Konnari explores linguistic and cultural intersections in medieval and early modern Cyprus by studying the relationship of Leontios's fifteenth-century chronicle (penned in a Greek Cypriot dialect) and similar 'French' historical texts from the crusader Latin East or France. The Greek orthodox Leontios witnessed the Mamluk invasion of Cyprus while serving the Lusignan administration. His history, composed in a French-influenced Greek vernacular, reveals one Cypriot identity forged through linguistic interaction, code-switching, and bilingualism. Although Leontios used vernacular prose to construct a 'national' or dynastic history, he was nonetheless deeply influenced by the French historiography he encountered Outremer and during diplomatic missions in Europe.

With the goal of rehabilitating the much-maligned Estoires d'Outremer et de la Naissance Salehadin (an Old-French continuation of William of Tyre which circulated Outremer) Uri Shachar presents an interpolated episode describing Saladin's wars against the king of Nubia as evidence of a Frankish culture which made claims for dynastic and cultural prestige by inserting popular episodes from Arabic historiography into the framework of Old-French historical romance. Shachar questions multiple assumptions: that strict segregation existed between urban Frankish elites and rural indigenous populations, that an urban nobility established legal and social boundaries to limit cross-cultural encounters, and that a 'Frankish' Outremer elite imported and reproduced languages which bolstered European social categories and mentalities, shaped law codes, and reasserted 'Frankish' claims on cultural and political hegemony.

Other important aspects of translation across culture are explored by Anne Lester and Zrinka Stahuljak. As part of an extensive re-examination of the literary and physical translation of relics from the Byzantine world into Latin Christendom post 1204, Lester's chapter illuminates how such 'eastern' relics were integrated into and simultaneously reshaped the western devotional landscape. Integration could be physical (relocation or the fashioning of new reliquaries), literary (translation accounts), and liturgical (the creation of specific feasts and offices for newly acquired relics). While clerics played crucial roles as 'translators' in the movement and authentication of relics, a lively pilgrimage translation market also emerged in the aftermath of the fall of Acre to the Mamluk sultanate in 1291. As interpreter-intermediaries and fixers, dragomans helped western pilgrims navigate the cultural complexities of the Holy Land, including the often misunderstood custom of 'courtoisie'.

Renate Blumenfeld-Kosinski cleverly uses Pierre Dubois' De recuperatione Terre Sancte (itself a hybrid between armchair travel narrative and crusade proposal), to elucidate the cultural assumptions behind Dubois's notion that Latin Christian women, trained in medicine and foreign languages, could assist in cross-cultural contact by infiltrating Muslim households and potentially converting Muslim women (who in turn could convert their spouses). Dubois's scheme inverts the long-cherished theme, in epics and romances, of the marriage and conversion of Muslim women; Christian women might convert their male Muslim spouses. Pierre's vision of deliberate cultural miscegenation through medicine, translation, and marriage contrasted sharply with Philippe de Mézière's contemporary proposal for the purposeful creation of a strictly segregated and self-sufficient quasi-regular crusader society composed of militant crusaders and their progeny-producing western wives.

In conclusion, this volume eradicates deeply rooted assumptions about the ways in which societies functioned Outremer, crosses disciplinary boundaries, and outlines ambitious new avenues of research. Some of its essays would be suitable for advanced undergraduates and certainly for graduate students engaged in Mediterranean studies. On-line tools and addenda, including translations of original source material, introduce another pioneering element to this volume, bringing functionalities associated with textbooks to a volume of scholarly essays.