Katherine Allen Smith: The Bible and Crusade Narrative in the Twelfth Century 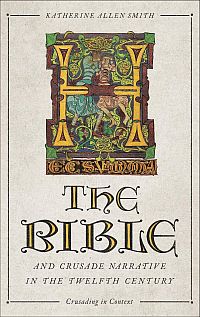 Quantum shifts in crusade historiography mean that at last liturgy, commemoration, the home front, material objects, biblical exegesis, and genres previously dismissed as peripheral are rightly viewed as essential to understanding the mental world of those engaged in crusading and the influence of crusading on individual and communal identities. Such paradigm shifts require the reframing of essential questions and laborious interdisciplinary research. Katherine Allen Smith has done both, drawing on text-mining techniques to create indices of the scriptural verses cited by chroniclers (215-54), while also redefining and reconstructing the thought processes behind the creation and usage of First Crusade narratives.

As Allen Smith notes, historians of the Middle Ages have routinely acknowledged in passing that biblical imagery, language, and exegesis deeply colored medieval historians' composition of First Crusade narratives. Yet these narrative sources have traditionally been rated and exploited by modern historians according to their perceived ability to yield "facts" or trustworthy "eyewitness accounts" of what "actually" happened during the First Crusade, to speak to twentieth-century conceptions of history. Allen Smith instead draws on recent scholarship which engages with crusade narratives as cultural constructs and literary products. For the medieval authors of these works, history was theology and covered both political and salvation narratives, the spiritual and material realms, the past, present, and eschatological future. Scriptural exegesis therefore shaped the ways in which authors promoted and described the significance of the First Crusade to its observers and participants. Chroniclers drew on cutting-edge exegesis, reform polemic, and patristic and Carolingian scriptural commentaries to justify the First Crusade as a new form of holy war, and to envisage the crusaders as embodiments of the vita apostolica (apostolic life) or the new "chosen people" fulfilling biblical prophecies. Such repurposing generated new forms of exegesis (direct engagement with contemporary social and political concerns, a reevaluation of the relationship between literal and spiritual modes of exegesis) which reshaped the way in which key scriptural passages were interpreted in preaching, theology, and liturgy, thereby contributing to a medieval European identity.

Allen Smith rightly begins by outlining biblical exegesis' pivotal place in the intellectual and spiritual milieux of twelfth-century western Europe. Authors of crusade narratives consciously chose biblical exegetical models to gloss the spiritual-historical meaning of the First Crusade rather than employing classical or political historical models (as they did for the Norman conquest of England). Chains of association between scriptural passages and the commentary tradition (encultured through study, liturgy, preaching, and codicology) were constantly reworked in dialogue with living Jewish communities and polemic-driven reform movements. Chroniclers of the First Crusade viewed Old Testament events as typological prophecies fulfilled by contemporary reform movements intent on vying with Jews and heretics, reviving "apostolic life," purifying the Church from simony and clerical marriage, and re-examining the nature and relationship of secular, papal, and ecclesiastical authority. Exegesis was pressed into the service of polemical debate and commentary on recent historical events.

For all these reasons, exegesis played a crucial role in the unprecedented outpouring of texts which sought to interpret the meaning of the events of the First Crusade, envisaged as sacred history. This interpretative process yielded enduring conclusions: the crusaders were martyrs, imitators of Christ and the apostles, the Old Testament "chosen people" (or new Israel) combatting Muslims envisaged as stand-ins for Canaanite pagan idolaters. Allen Smith combines a close qualitative comparison of various authors' treatments of key events with the quantitative analysis of biblical books cited and how these varied by author. She concludes that although certain common themes emerge, each author "redirected the exegetical conversation" through their citational choices, creating an individually unique, multi-layered exegetical interpretation of the First Crusade's events. This proved particularly true for writers' retrospective reconstructions of Urban II's speech at Clermont (69-77) and for the sermon-like speeches attributed to Kerbogha's mother (88). Chroniclers' parsing of the meaning of the First Crusade with biblical authorities enabled Latin Christians to craft a new collective identity as God's "true" chosen people and to justify their occupation of the Holy Land (91).

Twelfth-century authors also creatively merged genres - hagiography, pilgrimage itineraries, and chronicles - and packaged crusade chronicles with other materials to more fully convey the crusader experience to multiple audiences and tie it to existing pilgrimage traditions and local identities. Despite convenient modern editions, crusade chronicles should therefore be read with the materials which originally accompanied them and authorial tactics evaluated in context. For example, Allen Smith notes that Christian insistence on viewing Old Testament passages and prophecies as "types" fulfilled by Christ and the apostles in the New Testament meant that Christian chroniclers drew on anti-Jewish polemic to distance themselves from living Jews while viewing Old Testament Israel as the "type" of contemporary crusaders. Their project undoubtedly intersected with the anti-Semitic and eschatologically inspired violence which accompanied many major crusade campaigns. Hagiography, pilgrimage itineraries, maps, and geographical guides also were used to rationalize Christian claims to ownership of the Holy Land and to literarily "erase" centuries of Muslim occupation. Early chroniclers used typological association of Muslims with Old Testament pagans and Roman persecutors to bolster the crusaders' typological paralleling with the Old Testament Israelites and the early martyrs (embedded in history, hagiography, exegesis, and liturgy). Polemic and inflammatory imagery were applied to both Jews and Muslims, who were accused of attacking Christ by attacking his followers and portrayed as deserving of divine judgement and disinheritance.

Allen Smith concludes by examining the complicated and evolving conceptual roles of Jerusalem and Babylon as both earthly cities and as dichotomous embodiments of the Augustinian city of God (heaven) and city of the Devil (the world). Crusade narratives sought to demonstrate that the crusaders were worthy heirs to both the earthly and heavenly Jerusalem by stressing their imitation of Christ and the apostles and portraying the crusader capture of Jerusalem as the reenactment of Christ's cleansing of the Temple. Augustine had portrayed the peregrinatory inhabitants of the city of God as united by caritas and humility, as engaged in both physical and spiritual warfare. Christian chroniclers therefore stressed that crusaders embodied the vita apostolica of the early church through their voluntary exile, quest for the heavenly city, and sacrifice for fellow Christians (Matthew 19:29). Their opponents were associated with the biblical Babylon, the earthly manifestation of cupidity and pride, such that the city of Cairo (identified with "Babylon") was described as a sink of captivity and iniquity. In contrast, the crusader conquest of Jerusalem and "cleansing" of the Temple from supposed Muslim avarice, heresy, idolatry, and pollution was envisaged as parallel to and the fulfillment of the purifying and purging rhetoric employed in Gregorian reformers' campaigns against heretics, simoniacs, usurers, and married priests in the western "Temple" of the Latin Church (Jerusalem).

Allen Smith's rich study opens the door to further investigations of the relationships between different literary genres and between exegesis, theology, and history. It also poses serious questions for historians of the crusades and of inter-religious polemic. If living Muslims were recast as pagan Canaanites through the application of exegesis to history, does this explain the persistence of the trope of "Muslim as polytheistic idolator" even when Latin Christian authors had encountered living Muslims whom they knew to be monotheist? If the success of the First Crusade inspired shifts in exegesis, did the military failure of the Second Crusade (52-3) and ensuing disasters lead to further exegetical revolutions as new biblical authorities were utilized to explain failure and call for repentance? Did changes in reform programs and crusading practices lead to changes in exegetical habits? The investigation of many bible commentaries still in manuscript will be required to answer these questions. Allen Smith has shown us just how much historians can benefit from this approach, and it is to be hoped that she and many of the authors she cites continue this important work.