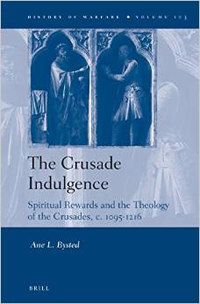 Comprehensive modern histories of indulgences have long been relatively unavailable to scholars unable or unwilling to read German. Until the last two decades, monoglot Anglophones were obliged to resort to citations from or partial English translations of monumental volumes by Adolf Gottlob, Nikolaus Paulus, Bernhard Poschmann. For those with French, there was Paul Anciaux's pioneering work on penance, and linguistically challenged English-speaking students could always be directed (with appropriate cautions), to the outdated, although still impressive, three volume work of the Protestant historian Henry Charles Lea. This has all recently changed with a rekindling of interest in facets of medieval and early modern penance and indulgences, part of a larger trend towards the study of popular, lay, and lived aspects (rather than merely the high intellectual or theoretical aspects) of religion.

In contrast, there is a well-established tradition of lively intellectual tourneying in English regarding the specific nature, meaning, and evolution of the indulgences and privileges offered to those who supported various crusades. As Ane Bysted notes, debate over the precise nature of the spiritual reward offered by Urban II at Clermont (in 1095) continues to shape the historiography and the very definition of the crusades. That is, was the grant of a remission of sins (or the spiritual equivalent) by the papacy essential for transforming a particular campaign into a crusade? Bysted falls firmly on the side of historians (including Jonathan Riley-Smith) who see the papal grant of an indulgence as essential (rather than accidental) to crusading and as a crucial indicator of the ideology and theology of crusading both in those offering the indulgences (the ecclesiastical elite) and those availing themselves of them (the participants) (5). This emphasis on a top-down definition of crusading is allied to Bysted's attempt to counterbalance the latest historiographical shift towards understanding the impact of crusading on its lay participants (and the ways in which they conceived of crusading) with a consideration of how learned theologians and ecclesiastics conceived of crusading warfare as a meritorious work deserving of spiritual reward.

Yet as Bysted and many other historians of indulgences note, indulgences were not an idée fixe. In fact the granting of indulgences as spiritual compensation for meritorious activities (including Urban II's famous declaration) preceded the theological working-out of their justification in terms of the penitential economy (or later its circumvention). While constructing overarching treatments of the sacrament of penance and also conceptions of the afterlife (including the idea of purgatory), theologians were often forced to justify, ex post facto, practices (including indulgences) which had become common. Similarly, the precise spiritual reward being granted in crusade indulgences was negotiated and renegotiated by a succession of popes. This renegotiation evolved in line with notions of what the crusade was, who could participate, and what the appropriate spiritual remuneration was for various forms of participation.

After an expertly guided tour of the tortuous labyrinth that is indulgence and crusading historiography (ch. 1), Bysted returns to the question, hotly contested among historians of the crusade, of what precisely Urban II offered to his audiences. Was he intending the spiritual reward he offered to apply to punishments in the afterlife or simply offering some form of commutation of enjoined penance applicable to this life only? As she herself acknowledges, any contextualization of Urban's offer is a delicate undertaking, as most of the sources which survive date well after the triumphant success of what became known as the First Crusade or come from sources at the top of the ecclesiastical and intellectual hierarchy (papal bulls, canon law, surviving indulgences) (ch. 2).

Similar methodological problems haunt the sources from academic circles (ch. 3), the surviving host of papal bulls granting different formulae of crusade indulgences (and other spiritual and temporal privileges) to participants in the crusades (ch. 4), and canon lawyers' and theologians' attempts to reconcile what was presented as a spiritually meritorious activity in crusade bulls to discussions of just war in other contexts (canon law, commentaries on the Fifth Commandment) and the manifold forms of imitatio Christi (ch. 5). Finally, what differences existed between the vague or carefully guarded and conditional presentation of the crusade indulgence in intellectual circles and papal bulls and the way in which preachers "sold" indulgences to audiences in rousing sermons (ch. 6)?

Throughout her work, Bysted reaffirms that what set the crusades apart from other wars was precisely the opportunity for participants to win a spiritual reward. As the institutions of crusading evolved, this concept became (re)codified in specific indulgences promised to crusaders in papal letters. The promise of "remissio peccatorum" (remission of sins) became the preferred expression, particularly after it was popularized by Innocent III and the Fourth Lateran Council (1215). However, many twelfth-century popes experimented with other phraseology, and the precise implications of "remissio peccatorum" remained unclarified for a considerable period. What to make of this phrase, which was already being used for donations to ecclesiastical institutions by the eleventh century? As Bysted suggests, perhaps a study of the concept of spiritual reward underlying charitable donations would help to illuminate the origins and intended meaning of "remissio peccatorum" in papal letters for various crusades, as would a study of the formula's usage in the Creed, the liturgy and various sacraments. It was precisely these interconnections and resonances which may have made the phrase, despite its imprecision, more popular and trustworthy to lay and ecclesiastical audiences alike than newer formulas indicating relaxations of or remissions of enjoined penance. For Bysted, it was the confidence of popes in their powers to grant indulgences, rather than their views of them, which changed during the period under consideration. As confirming evidence, she cites the results of her research into formulas employed in papal bulls published in the Patrologia Latina database; references to remissions of enjoined penances remain rare in comparison to those for the remission of sins. Arguing against historians who have seen the papacy of Eugenius III as a turning point in the development of ideas about the merits and rewards of crusading (from early indulgences which were not intended to have any effect on individuals in the afterlife to indulgences that promise precisely this), she sees a shift of emphasis and presentation of the crusade in this period rather than a radical refinement of already-widespread belief in the transcendental spiritual effects of crusading.

Bysted also concedes that the theological explication of crusading's significance shifted in response to evolving crusading institutions and outcomes. In particular, the loss of Jerusalem (in 1187) and the leadership of Innocent III resulted in an increased stress on participation in the crusade not as an option, but as an obligation and duty for all Christians, which corresponded with increased possibilities for gaining crusade indulgences granted to non-combatants. Forced to explain and justify the well-established practice of granting indulgences when, from the mid-twelfth century onwards, they began to mull over the topics of penance (including the concepts of contrition, guilt, and penalty), purgatory (and the distinction between temporal and eternal punishments), and the power of the keys, theologians also modified their explication of the functioning of crusade indulgences in response to current events. Some deemed crusaders worthy of receiving a plenary (full) indulgence because they risked their lives on campaign. Yet other early scholastics remained reserved about indulgences for fear that the penitential system would be bypassed (rather than supplemented), and focused on the necessity of compensating for the remitted penance. In order for indulgences' remission of enjoined penance to have any real effect in reducing crusaders' stint in purgatory, theorists argued that penitents must possess at least internal contrition (manifested in oral confession) and the intention of performing enjoined penance in this life to the best of their ability (the remainder to be compensated for by the church militant's performance of suffrages including prayers, processions, almsgiving and the Mass). This problem of compensation was only "solved" with the introduction of the concept of the inexhaustible treasury of merits circa 1230. This concept shifted the onus for compensation from the penitent (the individual's intention or desire to substitute or perform works of satisfaction) and the church militant to the jurisdictional power of the keys vested in bishops and popes (who could draw on the limitless merits of Christ and/or the saints).

A final chapter examines if and how learned and papal ideas regarding the operation of crusade indulgences were transmitted to lay and ecclesiastical audiences through another form of mass media in the medieval period: sermons. This is perhaps the part of Bysted's book which comes closest to treating popular religion, and she concludes that many of the subtleties of theologian's reservations were elided in surviving model sermons labeled as suitable for preaching in support of the crusade, although this tendency reversed somewhat once pastorally minded individuals were drafted as recruiters.

A lightly revised version of Bysted's doctoral dissertation (2004), this monograph does a real service in bringing the fruits of German and French scholarship on indulgences and penance to the English-speaking world. Yet ironically, Bysted omits significant works on these topics which have recently appeared in English, including Norman Housley's research on the later crusades, Mary Mansfield's ground-breaking work on public penance, Rebecca Rist's treatment of papal bulls and crusading, and R. N. Swanson's seminal recent works on the popular perception and use of indulgences in England. To be fair, many of these works lie in periods technically outside the chronological parameters of her book (1095-1215), and Bysted does cite Robert Shaffern's work on indulgences and Sarah Hamilton's vastly influential revision of the field of early medieval penance. However, reference to scholarship on ensuing periods would have reinforced her argument that the period she has investigated was a formative era for crusade indulgences. It would also have done much to ensure that her nuanced research was read by a wider audience. I would nonetheless heartily recommend Bysted's monograph as currently the best English survey and intellectual contextualization of indulgences issued for crusading in this period (1095-1215). As such, it deserves to be read not only by crusading historians but those interested in the history of the Latin Christian church, medieval theology, and also medieval spirituality as manifested in truly "popular" forms including, but not limited to crusading, pilgrimage, almsgiving, and church building.