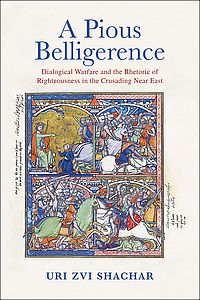 As multiple recent books have demonstrated, Mediterranean studies can enliven, complicate, and enrich the field of crusade studies through judicious revisionism. Examining the discourse of religiously motivated warfare shared between Christian, Jewish, and Muslim communities, Uri Zvi Shachar challenges, as have others before him, Joshua Prawer's conclusion that contacts between religious communities in the Near East, even in bustling entrepôts such as Acre, were negligible in comparison to the Iberian peninsula. [1] Shachar argues that the crusades did not generate and ossify "European" and "Islamic" identities. Instead, writers created and drew from a common well of rhetoric, ideas, and imagery about "militant piety" and contested holy spaces, which enabled authors and their audiences to probe "cultural boundaries and hermeneutical codependencies" (5).

Each of the religions inhabiting the Holy Land possessed complicated traditions of legal and polemical approaches to holy war and generated narratives which sought to justify claims to the region. And yet, particularly after 1187, these sources demonstrate "interdependent literary conventions" and a "shared grammar of spiritual warfare" (6-7, 9). For example, both Christians and Muslims invoked Saladin as a mutual exemplar of piety and aristocratic ideals. This therefore calls into question the usage of terms which imply assumed or constructed binaries, including "crusade" and "jihad" (6-7).

Shachar therefore provides a revised historical narrative of the nature of pious warfare in the Near East after 1187. Rather than following the traditional argument that the rhetoric of sacralized conflict peaked in the 1180s (which one could imagine might occur in, for lack of a better term, "western Christendom") [2], Shachar instead stresses that the increasing collapse of a "polarized political structure" in the Holy Land and the proliferation of alliances across confessional, linguistic, and political boundaries ironically generated a novel language for and enactment of holy war. Writers portrayed warriors as performing and preserving cultural, religious, and political distinctions through a complex renegotiation of similarities and differences and a shared discourse of militant piety, loyalty, and purity (14, 35). In an attempt to envisage relationships between combatants, authors created and deployed motifs and symbols relevant across cultures to delineate a simultaneously shared and contested "chivalrous habitus" (36).

Shachar utilizes Jacques de Vitry's letters, histories, and sermons to military orders to argue for a shift from the certainty of imposed rigid categories to unease about permeability between and mutual influence of the multitude of cultures and religions inhabiting the Near East. Shachar's argument that Jacques' opinions on the complex and protean nature of intercultural relations in the Near East evolved over time is a reasonable one. In his letters and Historia Orientalis, Jacques certainly lamented the blurring of linguistic, religious, political, and cultural boundaries, denounced acculturated Franks as unwarlike degenerates and viewed it as his and the newly arrived crusaders' responsibility to employ sacred warfare to reestablish differentiation between communities (37, 43). That Jacques became more open to the possibilities posed by diplomacy and conversion as accompaniments to pious belligerence is clear from the trajectory of his and Oliver of Paderborn's letters and histories, their attempts to convert Muslims and eastern Christians and to negotiate with al-Malik al-Kāmil, and their involvement with the crusades of Frederick II.

However, Shachar unfortunately chose to utilize the deeply flawed Pitra edition of Jacques' sermons to military orders, and his interpretation of the sermons lacks the context of Jacques' own bittersweet relations with the military orders as bishop of Acre. This leads him to conclude that Jacques' sermons shift away from the reproach of those who are too similar to "Saracens" to acknowledgement of shared symbols and behaviors. Based on the somewhat problematic interpretation of a single illustrative story about a bald and bearded knight who claims to be a Templar and is martyred, Shachar claims that the term "Templar" had become a shared category by which both Christian and Muslim commentators described combined military and religious zeal (49). However, this exemplum stems perhaps not from Jacques' own experiences in the East but from the polemical environment in Europe (variations of the tale show up in "crusading" excitatoria and sermons dating well prior to Jacques' sermons to the military orders). Perhaps most importantly, the extended discussion of holy war, apocalypticism, and heresy in Jacques' sermons is downplayed.

Similarly, the otherwise convincing discussion of Reynald of Châtillon as a multilingual traitor might have benefitted from an examination of Peter of Blois' characterization of Reynald as a "martyr" for European consumers. This is not to deny Shachar's main point, that there appears to be a shift, in the literature after 1187, towards conceiving of holy knights through probing the benefits and pitfalls that emerged from "multiple affinities" with their erstwhile enemies. One might also argue that these concerns regarding affinities with the declared targets of holy wars stemmed also from arenas within "Christendom" (campaigns against "heretics," "pagans," political enemies, and in Iberia).

Jacques and others were likewise concerned with the role of women in cross-cultural dialogue. Shachar deftly analyzes how Frankish and Mamluk literary works used sexuality to delineate cultural boundaries and explore sacred violence and shared warrior cultures, spaces, religions, and languages. In particular, Frankish and Mamluk literature employed a common language of hybridity and featured female protagonists as cross-cultural facilitators who enabled the coproduction of pious warriors across abstract political divides (11, 65-66). He rehabilitates the Estoires d'Outremer and Arabic popular literature as valuable texts which visualize sacred spaces and power by employing women with hybrid identities and intercultural marriages to address miscegenation and migration and to legitimate Islam and regime change (70, 83-89). These fusion genres justify the activities of their warrior protagonists by eschewing conventional binaries and creating complex identities through shared cultural references; they represent the Holy Land as "a site of codependence" where warriors are forged through "sharing an interpretive and cultural space" (96).

Ensuing chapters convincingly examine the cross-fertilization of apocalyptic rhetoric and narrative strategies employed by Jewish, Christian, and Muslim authors (in sermons and prophecies intended for both elite and popular audiences) to stake claim to the just possession of holy spaces (chs. 4-5). Jewish authors countered Christian appropriation of Old Testament figures associated with Christ and/or holy warfare such as Joshua and the Maccabees as part of a larger polemical battle waged by recent immigrants to the Holy Land. Engaging with the competing historical and apocalyptic claims of crusaders, eastern Christian, and Ayyubid authors, Jewish writers crafted their own claims to the "Land of Israel" (ch. 5). These chapters make significant contributions to our understanding of the rhetorically and militarily belligerent environments in which both apocalyptic prophecies and histories, new and old, from one's own community and from other communities, were wielded to stake and defend claims to sacred spaces.

The book's closing chapter probes how the rhetoric of pollution and purity was generated by the perceived dangers of proximity and shared and contested holy spaces. Employing metaphors of blood and water as cleansing or contaminating agents enabled communities to express anxieties over the loss of identity and distinctness and possession of the sacred, even while those same communities shared or sparred over sacred and profane spaces and engaged in intercultural trade, diplomacy, debate, conversion, and personal relationships (ch. 6). This section illustrates how perspectives and theories derived from Iberian and Mediterranean studies research on literary and cultural rivalry and "coproduction" can reinvigorate and realign discussions of pollution, purification, and holy war (180, 192-200).

In his debut monograph, Shachar has given seasoned historians of the Mediterranean and the crusades much to reconsider. This reviewer anticipates that his future scholarship will continue to fruitfully challenge ossified categories which have long served as an admittedly imprecise and biased intellectual shorthand.