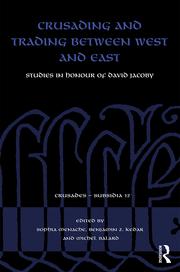 This weighty Festschrift bears eloquent testimony to David Jacoby's work as a scholar, collaborator, and teacher in many fields, including archaeology, material culture, conquest, pilgrimage, commerce, and diplomacy. Much of Jacoby's research focuses on entrepôts such as Acre, Alexandria, Constantinople, Venice, and Cyprus as points of intercultural contact and exchange, and Crusading and Trading should profit scholars of Mediterranean history broadly interpreted. Some of its articles, such as those on paper, treaties, and Marco Polo, could also benefit advanced undergraduates. The volume also includes transcriptions of otherwise inaccessible but extremely revelatory documents (75-76, 100-102, 165-69, 201-2, 251-57, 316-18), although the lack of translations of these documents and some articles into English potentially restricts their audience.

However, the section on 'Silk' alone illustrates how the study of textiles and their manufacture and exchange can humanize cross-cultural interaction. The reader encounters evidence of imported silk and a unique hoard in 'Cave 38' demonstrating medieval fabric recycling and reuse (327-36); sea-silk sent from a Frankish queen to an Abbasid caliph (336-39); shallow-draft vessels known as cigudas (284-88); caviar and other delicacies at the wedding of Agnes of France and Alexios II Komnenos (209-10); the universal but regionally varying production and consumption of piece-dyed silk fabric known as 'sendal' (340-50); Cyprus gold-wrapped thread and the conditions faced by skilled craftswomen engaged in the embroidery trade in London and Paris (289-305).

Diplomacy, warfare, and religious and cultural differences also impacted commerce and personal lives and the way in which some luxury goods were perceived and received (301, 334, 175-90). Entering the Mediterranean world via central Asia, paper was used by eastern Christian and Muslim communities for writings sacred and secular, although Greek Christian and Byzantine communities proved hesitant to utilize it for sacred texts.

While paper codices slowly spread in Latin Christendom (particularly Iberia and Italy), the Franks of the Levant remained reluctant to use paper for religious texts while employing it extensively in bureaucratic and commercial contexts, perhaps precisely because using paper demarcated credal differences (3-16).

Paper was but one of many products embodying the material, technological, and intellectual exchanges between the northern European, Mediterranean, and Asian worlds epitomized by the tales, travels, and commercial enterprises of the Polo family of Venice (216-24). Several authors argue for widening the typical focus on interactions between Italian, Frankish, Greek, and Muslim merchants in Mediterranean cities such as Constantinople, Acre, Alexandria, and Cairo, by conceiving of Venice and Constantinople as points of contact between the lands of the Rus, the Balkans, Asia, the Levant, and Egypt. Persons, goods, and communiques travelled along both East-West and North-South axes, leading to inevitable connections between commercial, cultural, religious, and diplomatic activities.

As Jonathan Shephard argues, Alexios Komnenos' diplomatic relations with western Frankish crusaders and the Fatimids in Egypt were influenced by his negotiations with the Rus (265-83). Michel Balard similarly paints the Cypriot port of Famagusta, populated by Latin merchants and refugees from the Holy Land and rivalled by Constantinople and Genoese trading posts such as Caffa in the Crimea, as a multicultural rendezvous point for western trade with the Levant and Armenia in the early fourteenth century (148-56).

Other microhistorical articles investigate individuals such as the Venetian merchant Pietro Stornello. His career reveals complex exchanges between the 'world of wool and the world of silk,' between Venetians and Muslims in the trading emporium of Tana, as well as the fates of his slaves, his aged aunt and eldest married daughter, his concubine and her two young children (351-364). A sensitive reappraisal of the longstanding collaboration between the Jewish merchant Sabatino Russo from Lecce and the Christian Venetian merchant Biagio Dolfin reveals that the two probably met in Mamluk-dominated Alexandria and engaged in multiple complicated commercial transactions perhaps grounded in conceptions of friendship (306-18). We are given further insight into cultural and religious interactions in Venetian Crete (including resettled peasants and the depredations of pirates and slavers) (228-31), Genoese Famagusta (Cyprus) (147-60), and Hospitaller-occupied Rhodes (161-72) and into Jewish communities throughout the Mediterranean. In Candia, Jewish women exploited Venetian civil laws on inheritance and guardianship of minors to make wills circumventing restrictions embedded in Jewish religious laws (238-57).

Yet what might seems to be a straightforward private legacy could become, as in the case of a very public donation by Pietro II Orseolo of Venice, a political statement (191-204). Another Doge similarly gave state approbation to the repayment of a loan owed to a consortium of Venetian merchants for which Philip, the heir of Baldwin II, Latin Emperor of Constantinople, had been mortgaged at an early age. Philip's mother Mary journeyed to her cousin Alfonso X of Castile and León to procure the ransom for her son; his emancipation was publically witnessed by a host of high-ranking Venetians and mediators from the mendicant orders (85-112).

Some articles argue for a reappraisal of well known figures and texts. Michael Angold cites the career of the often-despised Thomas Morosini, the first Latin patriarch of Constantinople, as evidence that the Latin empire of Constantinople, as Jacoby has argued elsewhere, was not a 'failed state'. Despite the competing expectations of the pope and his legates, the Venetians, the Latin emperor, and the Latin and Greek clergies, Morosini unlocked the potential of the Latrin patriarchate as a unifying force and forged partial consensus with the Greek clergy, a détente promptly undone by the legate Pelagius (17-34).

Peter Edbury similarly suggests that the author of the Lyon Eracles' translation and continuation of William of Tyre's history might have been an ecclesiastic critical of the regime in Cyprus and the Templar order (50-1). The military orders, in contrast, quickly created their own legitimizing foundation legends. In their compound in the city of Acre and elsewhere, the Hospitallers combined spolia and archaic-appearing building exteriors with modern interior vaulting to recreate the holiness associated with the life of Christ and other sites with biblical associations (127-46).

Further valuable reassessments include the reconstruction of the treaty negotiated by Richard of Cornwall with the Ayyubid ruler of Egypt in 1241, specifically the precise areas ceded to the Franks. These territorial gains arguably enabled the Latin Kingdom of Jerusalem to remain viable until the rise of the Mamluks (54-84). Late thirteenth century diplomatic and commercial accords between the Mamluk sultans and Venetians, Genoese, and crown of Aragon are likewise reassessed as important instances of a rupture with the traditional logic of the crusade and a shift to a more pragmatic strategy of institutionalized exchange between Christian and Muslim powers.

Damien Coulon's conclusions should perhaps be contextualized by Michael Lower's recent treatment of the simultaneous application of holy war, conversion, and diplomatic and commercial agreements during the Tunis Crusade of 1270 [cf. http://www.sehepunkte.de/2019/07/32913.html]. However, caveats aside, this volume provides powerful and intricate portraits of a multicultural Mediterranean world sure to appeal to scholars and advanced students inhabiting a similarly complex world characterized by global migration, trade, and politics.