Michael Lower: The Tunis Crusade of 1270 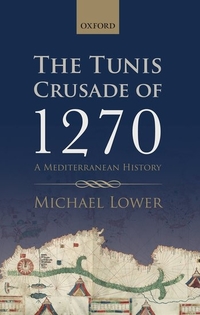 The well-planned Tunis Crusade, the second crusade of King Louis IX of France, is the subject of the book under review. The author, Michael Lower, had at least two goals in mind when he undertook the study. The first was to explain why the king chose to take his crusaders to Tunis. There have been many hare-brained explanations and a few that are more feasible. Lower assesses all of these and concludes that the best explanation is that the king sincerely believed the bey of Tunis might convert and that he had plausible grounds to think so. Moreover, Muslim conversion to Christianity was central to Louis IX's project. Lower also notes, however, that a number of considerations rendered it necessary for the king to keep the target secret until the last possible moment. Indeed, not until after he set sale was the crusader army fully informed of its destination. In explaining why Louis IX decided on Tunis, Lower more or less exonerates the king's brother, Charles of Anjou, from the charge of diverting the crusade for his own political purposes to the western Mediterranean from Egypt or the Holy Land, the traditional destinations.

This is not to say that Charles of Anjou saw no prospects for himself in his brother's decision. Tunis was a significant trading partner with Sicily, which had come under Charles's control in the later 1260s. There were other financial advantages for Charles in maintaining effective relations with Tunis in the tradition of his Hohenstaufen predecessors in Sicily. Peace might have been the most effective strategy, but a successful war of conquest and/or the bey's conversion had possibilities as well. Moreover, the potential establishment of a Christian principality in North Africa might in the long run have worked to the advantage of the Kingdom of Jerusalem. That Louis IX's grandiose goals went largely unfulfilled is beside the point, and Charles did benefit from the commercial advantages he secured when the Tunis Crusade winded down a few months after Louis IX's debarkation and not long after he died in camp.

To understand the complex of issues that makes the attack on Tunis in some sense rational or at least not wholly irrational is in fact related to Lower's second goal, namely, his determination to write a "Mediterranean history." His point is that to study the history of the crusades from a purely European political or economic perspective or with a single-minded focus on the Crusader States or Egypt is to miss the big story. The crusades took place in an always-shifting Mediterranean context. One cannot understand why Tunis loomed so large in the French imagination in the 1260s or, rather, why it did so in the imaginations of the circle of intimate advisers around Louis IX without having a great deal more than a cursory familiarity with Mediterranean politics and life more generally. For the thirteenth century crusades and especially for the Tunis Crusade this means that a scholar needs to immerse himself or herself deeply in matters like the Mongol invasions, the factional strife of Middle Eastern Islam, papal and Italian politics, and the Greeks' precarious recovery of their Empire in 1261 after 57 years of Latin/Frankish occupation. One needs genuine understanding of the workings of Mediterranean trade and the ideologies that underlay and sometimes limited it.

Finally, one needs to try to uncover the mentality by which a few people at the top, especially Baybars, the sultan of Egypt, and Louis IX were willing, because of their "powerful commitment to religious confrontation," (7) to challenge the age-old ties binding, however fragilely, the Mediterranean peoples.

The author of this study has endeavored with excellent results to accomplish these feats. We should all commend Michael Lower for this stimulating and lively Mediterranean history.