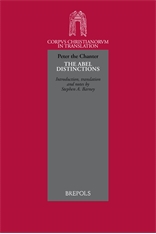 For far too long, those wishing to enter the mental world of preachers and theologians who depended on 'distinctions' to structure their sermons and biblical commentaries have been hampered by the lack of reliable editions of often massive distinction compilations. Despite the fact that medieval compilers of these collections pioneered many of the features which make an academic book navigable (including tables of contents, alphabetical order, reader-friendly formatting, and cross-referencing), the manuscripts of these works can be difficult to track down or prove impenetrable for the inexperienced. Stephen Barney has not only produced a hefty two-volume critical edition of one of the most popular and influential distinction collections - Peter the Chanter's Distinctiones Abel - for the Corpus Christianorum's Continuatio Mediaevalis series (288, 288A), but has now provided the uninitiated with an excellent one-volume translation of it (with cross-references to the Latin edition).

Peter the Chanter was a secular Paris master known for his focus on moral theology which spoke to contemporary issues and inspired other masters and students of his generation, and for his prolific production of biblical commentaries and treatises. In his most famous work, the Verbum abbreviatum, now edited by Monique Duthion-Boutry, Peter stressed that biblical exegesis (lectio), disputation (disputatio), and preaching (predicatio) ought to be the primary activities of those studying and teaching in the schools. Distinctions enabled students, masters, and readers to transform the layers of meaning and relations between scriptural passages encouraged by biblical exegesis and the argumentation fostered by disputation into a highly effective form of preaching known as the sermo modernus. A "modern sermon" took a biblical verse, divided it into parts, and used distinctions to expand each part into the discussion of a particular point. This structure enabled preachers and audiences to construct chains of associations and store them in memory, a crucial skill, as homilists often urged their listeners to convey the gist of their preaching to others who could not or would not attend sermons. That distinctions could stem from biblical exegesis is proved by the fact that some of the earliest distinction collections, composed by the Chanter's contemporaries, were organized around the Psalter, and that the Chanter's collection bears the marks of having been drafted and revised alongside his biblical commentaries (13, 15). Others, perhaps following Peter the Chanter himself, arranged their works according to alphabetical order.

Despite the supposed (mythical) divide between secular and monastic scholars, many of the Paris masters who drafted these collections worked with Cistercians and members of various orders of canons regular: Alan of Lille, Peter the Chanter, and Peter of Capua among them. Surviving manuscripts of the Distinctiones Abel show signs of heavy use; in some instances, it was merged or copied with other distinction collections (such as the Angelus). Distinction collections were copied and popularized by regular religious scriptoria, the university pecia system, and the mendicant orders; the scholastic penchant for cross-referencing and organization of material would carry over to the fully developed sermo modernus form, to encyclopedic compilations, and to extensive biblical concordances (13-14, 19). In turn, the compilers of early distinction collections relied heavily on previous commentaries on canon law and the scriptures and florilegia (compilations of patristic and/or contemporary authorities).

The organization of this material into chains of association, however, gives us insight into the love of layers of meaning and mental schemata of those trained in theology and pastoral care. Such schemata could be constructed as rhyming clusters (lectio, disputatio, predicatio), grab-bag topics (prayer, alms, charity), multiplicities or shades of meaning ('they are cast down' [A.2]), etymologies (hagiography is explained as 'writings about holy things' [A.24]), or take the form of preset, often biblical or patristic, paradigms: the Ten Commandments, the Beatitudes, the Creed, the Three Magi, the virgins/married/widowed. Some entries repeat terse or expansive assertions of antisemitism: '[A]89. To a spider (aranee) are likened the Jews, and all evil people, and infidels, and any human, as below in the article Evil People (M.20)' (81). If we turn, as perhaps the medieval user would, to 'M' and 'Mali comparabantur aranee' (M.20), we are told that the wicked are compared to spiders because of their destructive behavior, instability, lack of good works and uselessness, delight in wicked deeds, numberlessness, and mortality (373-374).

The complex and often ambivalent associations attached to symbols can be illustrated by the sections devoted to 'dog' (canis) (C.9-11). Dogs can symbolize positive qualities: useful barking, a medicinal tongue, acute smell, and fidelity, as demonstrated by the anti-heretical preaching of Augustine and the pastoral activities of good preachers and prelates (for this reason the Dominicans were later referred to as God's hounds). However, dogs are also associated with recidivist sinners (dogs returning to their vomit), those perceived as 'persecutors' and 'unworthy recipients' of preaching (including Jews and heathens) and lazy people or prelates who did not perform their pastoral duties. Peter the Chanter, Innocent III, and others of their circle would famously attack non-preaching prelates as 'mute dogs unable to bark' (Is. 56.10). The image of the dog was also associated with the parable of the good shepherd protecting his flock against heretical wolves. That audiences could pick up on such multivalent meanings and potentially turn them against preachers, transforming a sermon into a disputation, is demonstrated by an anecdote from the Dominican inquisitor Stephen of Bourbon, who portrayed one of Fulk of Toulouse's lay parishioners challenging Fulk, mid-sermon, over the atrocities committed by his 'guard-dog', Simon of Montfort. [1]

Speaking as a scholar who works extensively with Parisian sermon collections of the later twelfth through mid-thirteenth centuries, distinction collections (and biblical commentaries) are crucial for understanding the mental chains of associations present in sermons. But the same could be said of disputations and treatises, even the letters of popes and secular rulers composed by clerics stamped by the thought patterns of the schools. To take one famous example, the Chanter and his followers, including the reformer and crusade preacher Fulk of Neuilly (described as jotting down notes in the Chanter's biblical lectures to be preached to his parishioners) were notorious for their public preaching and legislation against usury, which influenced Innocent III. Peter's entry on usury (U.79) covers most of the essential points needed to define and attack various forms of interest-taking in sermons to urban audiences, including key biblical verses forbidding interest-taking. However, as did many sermons of his day, Peter also points to spiritual forms of multiplication (usury) which are beneficial - the growth of teaching/preaching, almsgiving, the hundredfold reward promised to the elect - in contrast to the usury (compounding) of sin. He includes several illustrative stories from the life of Saints Furseus and Laumer, before closing with commonplaces from other contemporary anti-usury sermons: the usurer is worse than a thief, his money is tainted, his activities are unnatural, and he drags his associates and heirs into mortal sin. The only remedy? Repentance and restitution (653-6). The Chanter's entry for usury thus provides all the major elements needed to deliver a convincing harangue against usury (the same could be said for other expansive types of distinction entries mentioned above).

Distinction collections thus provide a window into the mental habitus of scholars trained in cathedral schools, universities, and religious orders including the Cistercians, mendicants, Praemonstratensians, and Victorines. These worlds were not disjoined: Alan of Lille and Peter the Chanter retired to Cistercian monasteries before their deaths, and the works of secular Paris masters dialogued with, influenced, and/or circulated in monastic and mendicant milieu. Distinctions become essential for understanding the chains of association referred to in exegesis, chronicles, the arengae of royal and papal letters, treatises, sermons, and poetry (both vernacular and Latin), and the porous boundaries between these genres. As sermons were directed towards both lay and clerical audiences, all genders and ages, and to heterogenous religious groups, it could be argued that the mental habitus created by distinctions was both shared and contested between literate and oral cultures, between Latin and vernaculars, and between religions, creating common paradigms which could be either embraced or challenged. It is perhaps for this very reason that misogynist and anti-Jewish, anti-Islamic, and anti-heretical sentiments are present in so many distinction collections; in defining shared schemata, authors also defined perceived differences.