Nicholas Morton: The Crusader States and their Neighbours 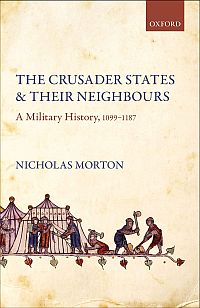 Because the complex history of the Near East in the twelfth century cannot be reduced to the simplistic binary of Christian versus Muslim, Nicholas Morton's new study therefore includes often-ignored groups (Kurds, Nizaris, Bedouins, Arabs, Armenians), although other important groups such as the Maronites, Druze, Georgians, Copts, Nubians and Ethiopians remain largely absent. Morton's expansion of geographical scope to include the northern crusader kingdoms of Antioch and Edessa (and forays into the Sinai peninsula and Egypt) similarly helps to counterbalance a traditional focus on the Latin Kingdom of Jerusalem. However, the omission of naval warfare, although understandable, may lead readers to under-estimate the roles played by Italian city-states in these regions.

Morton's innovative approach (a conflict database) yields new answers to long-debated topics such as the early crusaders' ability to defeat Fatimid armies, the circumstances leading to the siege of Damascus (1148) and battle of Hattin (1187), and to fresh observations on the use of pitched battles, and the importance of cities (and their civilian populaces), available manpower, and mercenaries. Fortunately, Morton has anticipated potential concerns regarding a data-driven approach to narrative sources with often subtle agendas and biases. Sources do not report all conflicts, conflicts can defy historians' constructed categories, and numbers may be exaggerated or used for symbolic effect, although cross-checking may enable an "informed estimate" (5-13).

Unlike many histories of the crusades, Morton begins after the crusader conquest of Jerusalem (1099), arguing that the crusaders' early expansionism was a mixture of opportunism and long-term strategy meant to persuade Turkish, Arab, and Fatimid neighbors to accept their presence while securing important resources: coastal ports and territory to the east and southeast. Morton concludes that the crusader kingdom of Edessa, normally dismissed as the weaker sibling of the principality of Antioch, was perceived by the Turks as the most dangerous crusader settlement in the early twelfth century (49).

Although initially the Fatimids had viewed the crusaders as a potential counterbalance to Turkish expansionism, crusader possession of Jerusalem instead spurred the Fatimids to contemplate allying with the Turks. Similarly, Turkic rulers resisted a full scale assault on the kingdom of Jerusalem perhaps because their own powerbase was secure, the Franks helped to drain Fatimid resources, and Frankish expansionism motivated coastal cities previously under Fatimid influence to seek Turkish assistance. The Christian Armenians of Anatolia and Cilicia likewise possessed complex, ambivalent, and ever-evolving relationships with other regional powers, preferring autonomy or Frankish Christian domination rather than Muslim rule.

If control of key coastal and inland cities was one goal of the crusaders, Morton examines the unique challenges this posed, particularly in the cases of Aleppo and Damascus, whose civilian populaces preferred to select their own rulers. To acquire and retain such large cities, the support of their populaces was essential and obtainable by promises of lower taxes, tolerance, protection and/or threat of force or siege. Most cities yielded to conquerors from similar cultural or religious backgrounds; sieges could fail if besiegers demonstrated brutality in their conquest of nearby cities (142). However, following medieval historians, Morton surmises that veterans of the First Crusade and the early period of expansion were soon replaced by newer rulers less committed to "vigorous aggression" as the benefits to be won dwindled (108-9). How then, to explain the Franks' decision to siege Damascus (1148) despite a host of factors mitigating against success? Morton concludes that eastern Franks reluctantly participated to placate their western allies, including Conrad III, king of Germany, who probably instigated the campaign (119-20).

Morton also traces the rise of the Anatolian Turks, embroiled in conflicts with the Byzantine Empire, the Armenians and Georgians, and the crusader principalities of Antioch and Edessa. With the death of the Seljuk sultan Zangi, the Anatolian Turks began to encroach on both Seljuk and crusader territory, resulting in Seljuk-Zangid rivalries, Nur al-Din's rise to power (partly through the adroit use of holy war propaganda to win over the inhabitants of Damascus and other regions), and the Byzantine emperor Manuel Comnenus' intervention in northern Syria and Egypt, in collusion with Amalric, king of Jerusalem.

Challenging the trope that the Crusader States were "permanently short of manpower," Morton finds little evidence for this but much for lack of money to pay troops (144). Historians have noted the ubiquitous availability of Frankish (and other) mercenaries and Morton concludes that a "ruler's purchasing power" determined the size of their army, not the "available pool of fighters" (150). Due to rich revenues from coastal trading cities, the Crusader States could muster large and disciplined armies, but replacing them quickly after a defeat proved difficult. The Crusader States therefore struggled to sustain armies of the size maintained by their wealthier and more populous Turkish and Fatimid opponents.

This information is crucial for understanding why the defeat at Hattin (1187) was so devastating for the Crusader States. Tracking the rise of the Kurdish mercenary, Saladin, Morton finds that prior to Saladin's invasions of the heartland of the Kingdom of Jerusalem in 1182, it had enjoyed relative security. He rewrites the well-known narrative of Hattin, stressing that Guy of Lusignan was not a military incompetent. Guy's actions fit pre-existing patterns of engagement, but Saladin's innovative attempt to "effectively block a Frankish fighting march's line of advance" proved crucial for victory (185-6, 189). Contrary to previous assumptions, Morton argues that the Franks Outremer were far more likely to engage in pitched battles than their contemporaries in Europe, partly because they were forced to by opponents "far more willing" to risk their armies, both because they could more easily replenish them and because their cultures rewarded decisive action (192-3, 197, 201-3).

For general readers, perhaps the most important conclusion of Morton's book is that because such a complex and evolving political, cultural, and religious climate characterized the Near East, both alliances and wars were not driven by religious ideology alone. Morton nonetheless offers a corrective to Köhler's theory that Near Eastern rulers would ally with any faction in order to prevent isolation or vulnerability. This thesis best explains various pragmatic practices including shared worship spaces, trade, intercultural borrowing, and a willingness to make alliances with "infidels" even when invoking the rhetoric of holy war (204-6).

However, Köhler's theory does not explain expansionist wars, "short-term 'opportunism,'" or instances where rulers and subjects alike formed alliances or declared wars based on faith identities (209). Morton suggests substituting interlacing Venn diagrams weighing various factors: migration, realpolitik, trade, internal tensions, holy war, and individual personalities (210). A section on crusader castles, like that on mercenaries above, is tucked at the end of a chapter but influences Morton's assertion that twelfth-century warfare in the Near East largely focused on the control of castles and fortified settlements (217). Morton notes that the Franks and the Turks appear to have developed few strategic innovations, although the Turks did expand their heavy cavalry and crucially learned how to defeat the dreaded Frankish mass cavalry charge.

Morton concludes by evaluating the factors leading to the Crusader States' eventual demise (261-2), including William of Tyre's accusation that the Frankish settlers had become morally and militarily soft. Morton surmises that instead it was a case of their opponents becoming more successful at countering Frankish forces (244). The Franks failed to conquer strongholds away from the coast, partly because Turkish cavalry was more mobile than cumbersome Frankish footsoldiers, enabling them to easily break Frankish sieges, while Muslim urban populaces put up a stiff resistance. Inland sieges meant that the Franks were deprived of one of their primary tactics (siege towers), whereas Turkish forces relied on undermining fortifications. While the Crusader States worked hard to integrate westerners quickly, successful collaborative ventures between already polyglot crusader armies and the forces of the Crusader States required the willingness of crusaders to benefit from local expertise and/or leadership, which was not always forthcoming. Morton concludes that it was the Franks' inability to take major inland cities and the Turks' ability to adapt strategies which sealed the Crusader States' eventual demise.

However, he stresses that the situation in the Near Eastern Crusader States rarely consisted of simplistic Christian versus Muslim struggles but rather multi-ethnic, multi-religious alliances and conflicts. This volume therefore breaks new ground in military history and should become required reading for those interested in the history of the crusades, conflicts in the Near East, and the Mediterranean.