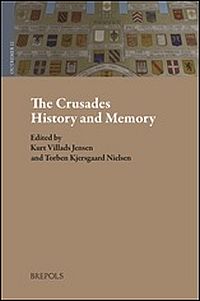 The topic of crusades and memory has come to occupy a prominent place in the historiography of the crusades over the last decade or so, and scholars now better understand the very many ways in which crusading was remembered individually and collectively during the Middle Ages and beyond. This collection of essays, most of which were first delivered as conference papers at the ninth quadrennial conference of the Society for the Study of the Crusades and the Latin East in 2016, adds to the now large repository of scholarly work on crusading history and memory. The Outremer series (published by Brepols) in which this collection appears is flourishing with some fifteen volumes now published or in progress. This essay collection is a welcome addition both to that excellent series and to the theme of crusading memory more broadly.

'History' and 'memory' are such capacious categories that almost any representation of crusading could feasibly be grouped under one or other of them. This means that there is perhaps less focussed thematic coherent in this collection that one might like, although the quality of the essays is very good and all of the topics worthy of inclusion. The editors have provided a (very) brief outline of the purpose and background of the collection in which they frame the essays around the question of whether it is possible to 'remember' something that is not conceptually defined or fixed. This question is meant to bring together two elements of the study of the crusades that have dominated recent historiography: the debate over what constituted a crusade as understood by medieval people, and how the idea of crusade was shaped and reshaped over time.

There is a loose conceptualisation of 'memory' itself throughout the volume. This is advantageous in allowing for a broad scope to the essays themselves. But it is also slightly limiting in that potentially illuminating engagement with the theory and history of memory studies is not pursued as much as it might be throughout the collection. It is also worth noting that between the conference from which most of the essays emanated and the publication of the volume (five years), was a time when several studies of crusade memory were published but are not cited here. This means that the bibliographies attached to each essay, although very helpful, are occasionally missing some newer scholarship.

Nonetheless, the ten essays cover a wide range of regional and historical contexts. Collectively and individually they offer much to both answer the central question of the volume and to provide both breadth and depth to scholarly understanding of crusade memory. One particular strength are the essays dealing with the postmedieval memory of crusades. Aphrodite Papayianni's rather short essay on Greek folk poetry traces a long debate in Greek scholarship about the identity (possibly the Latin emperor of Constantinople, Henry of Flanders) of the protagonist in a post-Byzantine folk song. Papayianni uses this debate to consider the relationship between real people/events and their cultural mythologies.

Mike Horswell's contribution deals with the inclusion and representation of the crusades in the Encyclopedia Britannica, first published in 1768. Horswell provides a fascinating account of crusader medievalism across the fifteen editions of the Encyclopedia, illustrating how closely understandings of the crusades are tied to contemporary political and religious concerns.

Elizabeth Siberry draws on Stefan Goebel's The Great War and Medieval Memory to consider the use of crusader imagery in British First World War memorials, showing the broad public appeal of crusader imagery in commemorative efforts during and after the war. Jonathan Phillips explores the memory of Saladin in the near East, arguing that the rise of Arab nationalism was a more important context for explaining the revival of Saladin's memory than the often-cited visit of Kaiser Wilhelm in 1898 to Jerusalem, Syria, Baalbek and Istanbul.

Three more general essays reflect on terminology and frameworks for interpreting the crusades. Adam Knobler's schematic study of paradigms for understanding the use of crusading rhetoric in modern contexts isolates six principal contexts in which the crusades are mobilised for contemporary purposes.

Christoph Maier engages with the surprisingly thorny question of when historians first started using the word 'crusade' to narrate the history of these medieval holy wars. Maier finds that it was only in the seventeenth century that the term 'crusade' was routinely used and that this was part of a historiographical moment when French started to overtake Latin as the language of crusading scholarship. Maier usefully reminds us that the analytical categories we use in our academic scholarship have their own histories.

Benjamin Weber's concluding essay returns to the question of when and why the word 'crusade' appeared in the Middle Ages. Weber usefully reminds us of the diversity of language used to describe the crusading enterprise and suggests that approaching the term 'crusade' as a linguistic phenomenon can illuminate the conditions in which it became important to differentiate this activity as something specific and unique.

Other essays focus on particular case studies within the medieval period itself. Kurt Villads Jensen examines the negotiations for the release of the Danish king Valdemar II from his two years of captivity by Count Henry of Schwein after the Fifth Crusade. These negotiations involved Pope Honorius II and Frederick II and, Jensen argues, should be understood in the context of Valdemar's recent status as crusader together with crusading plans in the Mediterranean and the Baltic.

Carol Sweetenham adds to the recent literature on the miraculous in crusade narrative by considering how the miracles at Antioch in 1098 influenced the memory of the crusades in the art, literary texts and historical narratives of subsequent centuries.

Massimiliano Gaggero traces the circulation of the Eracles in the late fifteenth century among noble families in northern Italy. Focussing on one Italian adaptation of the Eracles commissioned by the Montferrat family - the Italian Chronicle by Galeotto del Carretto - Gaggero skilfully demonstrates how the memory of crusading retained its force among aristocratic families of the later medieval period through the blending of historical narratives and forms.

Where to now for the topic of crusade memory? Collections such as this suggest that there still remain many paths to follow in seeking to understand how and why the crusades have such a dynamic legacy. The use and meaning of the crusades in colonial and postcolonial contexts looks to be one area of significant scholarly potential. The careful tracking of specific 'crusade' texts across time and place (as Gaggero's contribution models) will also help us isolate where and when crusading retains hermeneutic currency. Whether scholars should continue to attach the term 'memory' to these studies may also be worth examining. Overall, this very worthwhile essay collection adds both depth and breadth to scholarly understanding of the many long histories of the crusades.