Kurt Villads Jensen / Torben Kjersgaard Nielsen (eds.): The Crusades: History and Memory. Proceedings of the Ninth Conference of the Society for the Study of the Crusades and the Latin East, Odense, 27 June - 1 July 2016. Volume 2, Turnhout: Brepols 2021 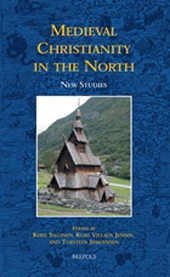 This collection of articles challenges the classic "centre" and "periphery" perspective in medieval studies, especially as present in Robert Bartlett's The Making of Europe. Bartlett shows how England, Northern France and the Rhineland succeeded from about 950 in spreading a Christian imperialism east and north. For the editors of this study, the growth of Christian Europe has to be seen as a reciprocal process, in which the peoples of the North not only received the culture of the Latin West but also reshaped it in their own image and likenesses. For this insight alone, this book is seminal and invites further studies.

Else Mundal of Bergen University considers "Remnants of Old Norse Heathendom in Popular Religion in Christian Times". The demonization of the Norse gods was part of the victory of Christian religion, where these gods thus continued to play a role.

Stefan Brink of the University of Aberdeen contributes with "Early Ecclesiastical Organization of Scandinavia, especially Sweden". He considers, especially for Sweden, archaeological evidence for an intermediate stage after conversion and before the formation of parishes, in which magnates in the eleventh and twelfth centuries paid for and built their own churches. This view might have been compared with what I pointed out in Da Himmelen kom nœrmere, (2008), how Danish Christianity was aristocratic in its expression before it turned pastoral.

Two articles deal with food and drink. Sæbjørg Walakter Nordeiede and Jennifer R. McDonald of the University of Bergen look at "Canonical Observance in Norway in the Middle Ages: The Observance of Dietary Regulations" and show that the archbishop's retinue at Trondheim did not necessarily follow the Church's dietary regulations. The sources are inconclusive for the habits of ordinary people.

Lars Bisgaard of South Danish University in Odense writes about "Wine and Beer in Medieval Scandinavia". We hear of scarcity of wine, especially in Sweden and Norway. The archbishop of Nidaros suggested that wine might be replaced in the Eucharist with beer. This remedy did not find favor with the pope! Professor Bisgaard provides evidence about the consumption of beer on the basis of drinking horns, and he links these with his previous important study of guild statutes and life in later medieval Denmark, especially in terms of mine drinking, commemorating the dead.

The most explicit opposition to Robert Bartlett's views comes from South Danish University's Kurt Villads Jensen. In his "Martyrs, Total War, and Heavenly Horses: Scandinavia as Centre and Periphery in the Expansion of Medieval Christendom", he attacks the view of many Scandinavian historians "that everything came a little late to Scandinavia and other countries on the periphery of Europe". Although some medieval sources do support this view, Professor Jensen insists that the central inspiration for this approach was an interpretation of Europe's history emerging after 1850. "This picture shows a complete misunderstanding of what actually happened" (92). Jensen argues that the Danes, for example, picked and chose what they wanted from the European centre, as did the Icelanders. Thus "the periphery became more original than the centre" (97). Drawing on his knowledge of crusading in the North, he shows how its idea and practice were used by Northern peoples, not as a result of being forced to do so by the Church but as a deliberate choice. There is a special place here for horses, also of a heavenly type. The Cistercians played a part, but there is some confusion about monastic foundations, with the assertion that Doberan "was re-founded by Cistercians from Doberan" (106). The author must have meant that Dargun was refounded by Doberan.

Torben Kjersgaard Nielsen of Aalborg University, in "The Making of New Cultural Landscapes in the Medieval Baltic", makes use especially of Clifford Geertz's concept of culture. His thesis is that the peoples of the Eastern Baltic must not be seen "as mute victims of an overpowering historical development" but as having "acted and reacted, appropriated and confronted" and thus influenced "the course of Christianization" (123). Thanks to good contemporary sources, Nielsen makes this provocative thesis credible. His interpretation shows how people on the fringes of Latin Europe managed to negotiate with the forces coming from its centres.

We move into a rather different world in leaving the Early and High Middle Ages, for the last medieval centuries contain rich sources not found in the earlier period. Claes Gejrot, editor-in-chief at Riksarkivet, Stockholm, and also of Stockholm University, provides a detailed study of "The Emerging Birgittine Movement and the First Steps towards the Canonization of Saint Birgitta of Sweden". He shows how in the sources for Birgitta we find "at least one easily distinguished set of religious and cultural ideas and values being imported from Scandinavia" (155). Birgitta's canonization came as a result of "effective lobbying by Swedish groups". Professor Gejrot contributes to this collection's central thesis that the European "periphery" could also function as a cultural centre.

The book's last three articles are closely related, for they consider interaction between the papacy and church discipline in the North. Kirsi Salonen of Turun Yliopisto, Finland, looks at "Forbidden Marital Strategies: Papal Marriage Dispensations for Scandinavian Couples in the Later Middle Ages". Her study provides fascinating statistical results from the papal Penitentiary, which she has studied in detail.

Torstein Jørgensen of Stavanger considers how " 'He Grabbed his Axe and Gave Thore a Blow to his Head: Late Medieval Clerical Violence in Norway as Treated According to Canon and Civil Laws". He shows how the two systems of ecclesiastical and civil law dealt with such cases, where the guilty priests tried to use the excuse of self-defence in order to continue as rectors. Considering the sparsity of Norwegian sources, this article is impressive and useful.

Finally Bertil Nilsson of Göteborgs University takes a single case that went all the way to the papacy and demonstrates how parish priests could have lived in the fifteenth century: "The Lars Vit Case: A Fragmentary Example of Swedish Ecclesiastical Legal Practice and Sexual Mentality at the Beginning of the Fifteenth Century". Lars Vit was rector and canon, a priest who had sexual relations with different women and was removed from his posts but then went all the way to the pope in order to get the sentence reversed. Professor Nilsson follows Vit in detail and gives the response of one of his mistresses, "I was an unmarried woman so why should I not be allowed to take any man I wanted". Nilsson surmises that this attitude was "probably...common".

Here as in most of the other articles it is possible to follow interaction between the international Church and individuals and groups in the North. Patrick Geary of UCLA provides some apt concluding remarks that bind the articles together. My one suggestion is that the contributors could have looked more closely at the Cistercians in the North. From the perspective of Clairvaux and C

îteaux, this was a remote world, and yet the Scandinavian foundations managed to integrate in their new environments and bind themselves to the Order in terms of administration and spirituality. The Cistercians in the North became part of a new world and flourished in it.