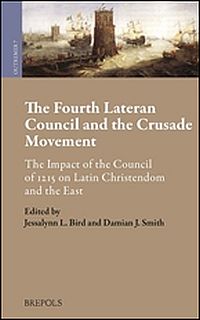 The Fourth Lateran Council (1215) was convened at a critical time in crusading history: the Fourth Crusade had recently ended with the creation of a Latin patriarchate in Constantinople, the Albigensian Crusade was in progress in the south of France, the bull Quia Maior calling for another crusade to the Holy Land had been issued only two years previously, expeditions against pagans in the Baltic were underway in 1215, and the Christian victory at the battle of Las Navas de Tolosa (1212) in the Iberian peninsula was very much in recent memory.

Amid this crusading and quasi-crusading activity, the figure of Pope Innocent III loomed large. Devoted to both renovatio (reform) and recuperatio (recovery of the Holy Land), Innocent transformed the scope of Christian involvement in crusading by allowing for the widespread redemption of vows, by invigorating liturgical activity such as monthly processions to allow all Christians to participate in crusading, and by committing to full remission of sins for all those who undertook the crusade themselves, or as a delegate of another, or materially through donation and gift. Thus, as this most welcome volume illustrates, the Fourth Lateran Council was an event that was conducted against the landscape of the crusade, convened by a Pope deeply committed to the exigency of the crusade, and took place at a time when the nature and meaning of crusading was under both scrutiny and open for transformation.

This volume brings together leading historians to analyse some of the many impacts of the Council on both the practice and character of crusading in the years following 1215. Divided into four parts, The Fourth Lateran Council and the Crusade Movement explores both the current crusading problems discussed at the Council and the longer-term impacts of the decisions around crusading that were determined at the Council. The crusading encyclical Ad liberandam was one immediate outcome of the convocation of some of Christendom's most influential players. But the decisions around vow redemption, remission of sins and indulgences, financing crusading, and even the leadership of crusades cast a long and sometimes dark shadow over the crusading movement well beyond 1215.

The place of liturgy in the practice of crusading has been the subject of a number of recent studies which have shown that 'invisible weapons' played an increasingly important role in the practice of crusading from the late twelfth century. [1] Richard Allington's essay develops this further, arguing that the Council renewed the practices of 'spiritual crusading' in a concerted effort to extend reform through Christian society. Underpinning this renewal were renewed commitments to sacramental participation, affective piety, and the centrality of the Cross as the unifier of all Christians. Expansion of crusader privileges were not without their problems, as Anne Bysted shows. Although the Fourth Lateran Council was the first to lay down guidelines for the administration of indulgences, what the specific theology supporting these indulgences actually entailed, remained a matter of significant discussion well beyond the Council itself and still required elaboration by Thomas Aquinas later in the thirteenth century.

An essay by Thomas Madden on the aftermath of the election of the Latin Patriarch of Constantinople (a messy outcome of the Fourth Crusade) sits a little uneasily in this section which otherwise deals with the nature of crusading participation. Madden's essay nonetheless neatly details the protracted decision-making around the election of the Patriarch and his successor, and Pope Innocent III's efforts to retain influence over disputed and ad hoc processes of appointment.

The second part of the book focusses on the specific context of the Albigensian Crusade. Indeed, Martin Alvira suggests that the political and spiritual questions around the Albigensian Crusade influenced the very decision to call the Fourth Lateran Council. The Pope's attitude toward Count Raymond and his heirs is considered by Marjolaine Raguin-Barthelmebs in her study of La Chanson de la croisade albigeoise. Here, the representation of a wavering and troubled Pope in this literary representation of the Council and crusade adds complexity to the drier conciliar canons. Another pressure on Innocent was the presence of the delegation sent to Rome by Simon de Montfort as well as the presence of Raymond VI of Toulouse and his supporters. Both of these groups used the Council strategically, as Marco Meschini shows. Other issues of reconciliation were dealt with at the Council, too, as Damian J. Smith outlines in a chapter on the case of Guillem Ramon de Montcada, whose petition and penitence may have been one of many to occupy the business of the Council.

Although the Albigensian Crusade might have provided the most immediate crusading context for the Fourth Lateran Council, other crusading activity in both the Baltic and Iberian Peninsula was important at this time. Essays by Alan V. Murray, Torben Kjersgaard Nielsen, and Miguel Gomez reveal the range of regional interests and priorities brought to the Council. The bishop of Livonia's presence was represented by the later chronicler Henry of Livonia as an important moment in bringing papal attention to the newly holy landscape of the region, while the deliberate use of the figure of the Virgin by Baltic prelates to create the idea of the Baltic as terra matris consolidated the sacralisation of this crusading location. In the Iberian Peninsula, the Council was also viewed as an important event at which to advance regional interests, and Miguel Gomez delineates both the concerns of Iberian bishops that attention was moving away to the Holy Land, and the concerted efforts of those bishops to refocus Innocent's attention on the needs of the Peninsula.

The final section of the book considers the encyclical 'Ad liberandam, the Latin East, and Crusaders' Rights'. Here, the impacts of the Council are explored, firstly by Thomas W. Smith in a fine analysis of Ad liberandam and the role of the Council in shaping it. Here, Smith finds that Pope Innocent III took a highly cooperative approach in working to communicate the call for crusade to the Holy Land, and that consultation with a wide and critical group formed the basis for what Innocent hoped was a representative and meaningful outcome. James Todesca explores the reality of Ad liberandam's attempt to restrict trade that might prove detrimental to the Holy Land. Todesca finds a fair degree of flexibility in the application of the canon, and shows that trade continued to flourish between western Europe and north Africa throughout the thirteenth century. Likewise, Jessalynn Bird reveals the practical difficulty of implementing the crusading privileges laid out in Ad liberandam in a careful study of the context of Frederick II's crusade. Once decisions and enforcement of privileges left the conciliar realm and were left to the oversight of many other interpreters and jurisdictions, continual complaints arose.

The final chapter of the volume (by Jan Vandeburie) traces the gathering of information about the Holy Land undertaken in the wake of the Council. With a focus on the writings of Jacques de Vitry, Vandeburie shows that the papal directives in Quia Maior and at the Council to encourage information-building to support a successful crusade had longer-term impacts, with texts by Jacques remaining the most significant sources of information about crusading and the Latin East into the fourteenth century.

This is a very strong collection. Its essays together paint a picture of the significance of the Fourth Lateran Council in a range of contexts and help us to better understand the crusading movement's many influences on the Council's business, rhetoric, and outcomes, as well as the many impacts the Council had on crusading activity. The strength of the volume lies in its integration of the range of contemporary perspectives brought to bear on the Council's discussions about crusade and reform. We are left with the impression that far from being a 'top-down' articulation of papal will, the Fourth Lateran Council was unexpectedly dialogic, consultative, and above all things, dedicated to advancing effectively the negotium Christi.