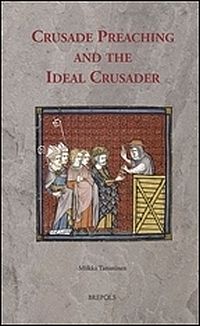 Thirteenth-century crusade preaching has been the subject of a number of studies over the last decades with the work of Jessalynn Bird, Penny Cole, Jean Longère, and Christoph Maier (among others) most recently dominating the field. This book, Crusade Preaching and the Ideal Crusader, adds to an already rich area of scholarship in a number of ways, and provides the reader with a thorough and lucid examination of the connections between preaching the crusade and defining the 'best' sort of crusader.

The book does not confine itself to the study of one particular crusade but considers the construction of the ideal crusader throughout the thirteenth century. This approach has its limits. One might ask for deeper contextualisation to explain discursive choices by preachers in particular times and places. But it also has its strengths. One does get a real sense of how crusade preaching continued to emphasise each crusader's interior qualities throughout the tumultuous thirteenth-century, despite the 'institutionalisation' of the crusade during that time and its deployment in a multitude of different contexts. Importantly, Tamminen is also interested in the sermons designed to appeal to those who had already taken the cross. In this way, the book adds something new to a voluminous historiography more often focussed on sermons for recruitment.

Thirty-six model sermons are used as the basis for this study. Most are well known to historians of the crusades, including sermons by Jacques de Vitry, Eudes of Châteauroux, Humbert of Romans, Roger of Salisbury, Philipe le Chancelier, Federico Visconti, and Gilbert of Tournai, although some have received more attention than others. That these are 'model' rather than 'lived' sermons is significant: they were not necessarily composed for a particular crusade event (although some were) but mostly provided material for different occasions. As crusading was increasingly directed against a variety of enemies in many different theatres of war, model sermons could be used in quite a diverse range of situations.

So who was the 'ideal' crusader during the thirteenth century, according to these medieval authors? Tamminen argues that although the sermons 'do not speak with one voice ... there is nonetheless some uniformity in the crusading messages' (280). Crusaders fought for God through participation in holy war and crusaders shared penitential, mimetic, pious, and martial features. Each of the substantive chapters in the book explores these features. The first, 'The Crusader and the Bible', traces the use of biblical tropes and exemplars in the model sermons, focussing on the imagery of the shield of Joshua, the dream of Judas Maccabeus, other biblical figures, and use of biblical prophecy. These exemplars could be used to underscore the importance and meaning of crusader or crusader-like activity in many contexts, from war against heretics to the expulsion of the Lucera Muslims; some had been integrated into crusade preaching from the time of the First Crusade while others came to acquire new meaning in the mid-late thirteenth century. Different political situations, such as the extended conflict between the papacy and the Hohenstaufen, ignited new use of old motifs relating to biblical prophecy. As Tamminen suggests, prophetic imagery provided the authors of model sermons with many opportunities to stress both the importance of undertaking crusade activity as part of God's plan and the consequences of delaying action.

The second substantive chapter deals with 'The Crusader and God'. This is a very long and detailed chapter which might have benefited from being split into two parts. Nonetheless, the material here is rich. The themes explored include the idea that the crusader was acting in the service of God in the manner of a vassal; the imitatio Christi and love of Christ (expressed sometimes, as Susannah Throop has shown, in terms of zeal and vengeance); the notion of pious suffering and the wounds of Christ; the 'treasury' of Christ's Passion; and ideas of martyrdom. All of these themes were present in the model sermons, just as much as they were present to greater or lesser degree in narrative or epistolary sources of the crusades. Some of these comparative sources are noted throughout, although some more critical contextualisation would have been welcome in this regard. One small example may be seen in the inclusion of Jacques de Vitry's letters, for instance, which are deployed to show that crusaders on the Fifth Crusade died 'well', peacefully and piously. Yet Jacques's letters were also designed - much like the model sermons - to provide didactic advice, to represent the crusade as virtuous and justified, and to offer exempla for others to use to recruit and promote the crusading effort. In other words, they are not uncomplicated sources themselves. Set against the model sermons, such sources also require careful handling.

The final chapter, 'The Crusader and the World', looks first at how the sermons dealt with the obstacles faced by crusaders in their decisions to take up the cross. These included resistance to crusading from friends and families (especially wives), or their own personal deficiencies (such as avarice or pride). The chapter turns to the financial burden of crusading and the efforts made by preachers to urge men to turn away from earthly wealth. Tamminen then engages with the argument that thirteenth-century crusaders were more frequently thought of as crucesignati than pilgrims as had been the case in the first century of crusading activity. It is asserted that in fact pilgrimage continued to be a central theme in crusade sermons and (following Caroline Smith's work on the crusades of St Louis) came to signify a crusader's interior state rather than his destination. For preachers like Jacques de Vitry, the crusades were understood to mirror both spiritual and penitential journeys, while rituals of separation, the regulation of emotional states, and pious behaviours such as fasting were all elements that pilgrims and crusaders shared. At the same time, thirteenth-century preachers were keen to differentiate between those who were part of the community of crusaders and those who were not. Tamminen includes women in the former category (although attention to the work of Anne E. Lester might have nuanced this discussion which focusses on the inability of women to participate militarily). Tamminen emphasises that although crusaders were thought of and expected to be a communitas, this did not mean that pre-existing social status was now irrelevant. Extant bonds of association still determined leadership and participation in these holy wars.

A sharper differentiation between the preaching of the earlier crusades and the thirteenth-century crusades may have been helpful throughout this solid study. It might also have been useful to read more of the use of these model sermons in the northern crusades. But overall this is a carefully researched and thoughtful book which brings to light a number of important themes in relation to crusade preaching and the construction of the best sort of crusade participant.