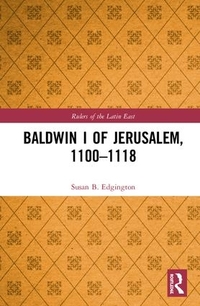 This is the first full-length biography of Baldwin I, king of the Latin Kingdom of Jerusalem from 1100-1118. Baldwin came from influential noble stock, but was not himself marked out for such illustrious leadership, having been destined as a third son to follow the clerical path. But loyalty to his oldest brother, Godfrey of Bouillon, during the First Crusade and, as Susan Edgington recognises 'a modicum of good fortune' (1), saw Baldwin gain the new title of King of Jerusalem and govern this distinguished but troubled new kingdom for eighteen years.

Susan Edington has written a tremendously useful and welcome study of Baldwin and the history surrounding his tenure as Count of Edessa and subsequent accession to the royal title. Paying due attention both to the context of Baldwin's leadership and what the sources reveal about his character, Edgington presents new insights into the world of the First Crusade and its aftermath. The complex network of primary sources that describe the progress and memorialisation of the First Crusade and the creation of the Latin states of Outremer are dealt with deftly throughout.

The book comprises ten chapters (each with useful subheadings), a helpful bibliography, and index. It follows the trajectory of Baldwin's life, beginning briefly with his familial context (linked both to the new Anglo-Norman world through his father and to Lotharingia through his mother's connections), and then moving swiftly to his participation in the First Crusade. The second chapter discusses the siege of Nicaea and the progress of the crusade toward Edessa, describing the growing rivalry between Baldwin and Tancred and the growing independence of Baldwin from the 'overshadowing presence of Godfrey', his brother (32). The death of Baldwin's wife, Godehilde, at Marash in 1097 is also noted as creating an opportunity for Baldwin to contract a second and advantageous union in the future (which he did to secure his comital connection to Edessa through marriage after Easter in 1098 with an Armenian noblewoman usually known as 'Arda').

Baldwin's rise to become ruler of Edessa is well documented by Fulcher of Chartres and Albert of Aachen and - from quite a different perspective - by Matthew of Edessa. Edgington brings together these accounts very skilfully, reading through the differences in circumstantial detail to show how Baldwin was able to exploit unstable political realities to create his own opportunities after the crusaders' success at Antioch.

Chapters four and five deal with the leadership and succession 'crisis' in Jerusalem in 1100 which saw Baldwin succeed his brother Godfrey as ruler of Jerusalem. Godfrey's title, as is well known, had been a matter of both debate and dispute since the capture of the holy city; Godfrey had probably preferred advocatus and princeps, but once he died in mid-1100, his heir - Baldwin - made his way to Jerusalem to claim the rulership as king. Edgington summarises the opposition to this succession clearly as well as the reasons why the title was preferred by Baldwin and his supporters. Baldwin's negotiation of what we might call 'difficult relationships' is narrated, with particular attention to the Patriarch Daibert and to Tancred.

Chapter six shows how the first half of Baldwin's reign was characterised by ongoing tensions between the new kingship and ecclesiastical lordship. This changed with the appointment of the Patriarch Arnulf (1112-1118) who offered significant diplomatic support to Baldwin in negotiations with the Byzantines and in Baldwin's bigamous third marriage to Adelaide of Sicily.

Baldwin's considerable military activities are the focus of chapters seven and eight, which deal respectively with the capture of the coastal cities including Acre, and with the ongoing defence of the newly established kingdom and its surrounds. The three battles of Ramla in the early twelfth century and the success of the coastal campaigns gave Baldwin a military reputation that Edgington describes as 'formidable' (147), despite uneven victories and shortages of manpower. His success was at least in part attributable to Baldwin's understanding that cooperation between the rulers of the crusader states was necessary to repel the incursions of hostile forces as is outlined in chapter nine.

The final chapter considers Baldwin's last years and legacy. Baldwin died in 1118 while on campaign in Egypt, the year after he had been afflicted with such a serious illness that it was thought he would die then. It was at this time that the Patriarch Arnulf successfully persuaded Baldwin to set aside his wife on the grounds of both adultery and consanguinity. The king's recovery seems to have been unexpected and his campaign in Egypt the following year was undertaken confidently. His death was not so sudden as to prevent Baldwin from expressing his wishes about his burial and succession; his body was taken back to Jerusalem and interred at the church of the Holy Sepulchre. Medieval Latin commentators were positive about Baldwin's kingship, although William of Tyre used Baldwin's reign to comment rather bitterly on what he saw as the intrusive and manipulative nature of the Patriarch Arnulf. The king's controversial marital history was a matter of discussion among later historians, mostly because Baldwin died with no offspring. As Edgington concludes, Baldwin's reign 'started as it began, with a succession dispute' (187).

Edgington delineates a complex period of crusading history with insight and skill. This book will be useful both to those with limited knowledge of the First Crusade, and to those with more specialised interests. Baldwin himself emerges as someone who benefited significantly from being the brother of Godfrey but who nonetheless made the most of his own opportunities as they came his way. He was clearly an effective military leader, adept at the diplomatic and political manoeuvring that was need to create cooperative alliances and stability in the early years of the Latin kingdom of Jerusalem. The sources that represent his rule are themselves fascinating products of crusading history and Edgington has drawn them together very well to tell the story of this rather understudied king, and to offer a fresh perspective on the First Crusade and its aftermath.