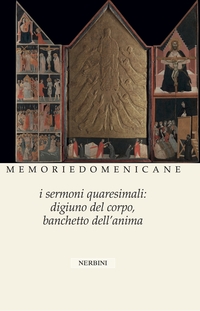 Since Christian antiquity, Lent has been one of the two great liturgical seasons (the other being Advent) associated with particularly rich preaching traditions; throughout the Middle Ages and beyond, the Lenten cycle inspired some of the Church's most memorable and important sermon texts. Though Lenten preaching came in a variety of forms and dealt with a considerable range of different topics, its essential purpose was always "to prepare the faithful, through careful reflection on their own earthly existence, to celebrate Easter through the confession of sins and the Eucharistic banquet" (10). Thus, Lenten sermons, for all their potential topical variety, tend to emphasize certain devotional attitudes and practices - penance and penitence; prayer and almsgiving; lamentation and spiritual renewal - over and over again. Perhaps no subject appears more frequently or figures more prominently than that most familiar of Lenten preparatory activities, fasting. This substantial and valuable entry in the Memorie Domenicane series explores the phenomena of fasting and preaching - and especially, perhaps, fasting in preaching - in the later medieval and early modern periods.

This issue of the journal is divided into three parts. Let's set aside the first (and main) part for the moment; the second part (337-463) consists of four article-length note storiche e storico artistiche (one in English, two in Italian, and one in French), by Thomas Izbicki (339-359), Alessandro Bazzocchi (361-388), Jan Władisław Woś (389-431), and Daniel Ols (433-463). These concern themselves mainly with various aspects of Dominican history from the early 1200s to the middle of the twentieth century (the article by Woś is something of an exception). The volume concludes with six substantial book reviews, all in Italian (465-484).

The heart and soul of the book is a multilingual collection of sixteen articles (nine in Italian, six in English, and one in Spanish), with an introduction by the editors (9-336); the section concludes with eight pages of color plates. Originating with a series of sessions organized by the International Medieval Sermon Studies Society at the International Medieval Congress at Leeds in July of 2016, the contents cover the period from the later twelfth to the sixteenth century; the Quattrocento, with which twelve of the entries concern themselves, is especially prominent. Given the temporal span, the Catholic tradition of preaching in Latin inevitably dominates the coverage, though the phenomena of vernacular and macaronic preaching - both of which became increasingly widespread in the later medieval and early modern periods - are also represented, and, beyond the Catholic sphere, the work includes articles on Waldensian preaching, Lutheran preaching, and even, from the Islamic tradition, Ramadan preaching.

The contents are arranged chronologically, though certain themes - the imagery and rhetoric of food and fasting; the work of individual preachers, both famous and otherwise; composition and performance - inevitably recur.

In the first entry, Eleonora Lombardo examines how later twelfth- and early thirteenth-century preachers treated fasting in Ash Wednesday sermons (17-42). Linda G. Jones investigates food and fasting in the Ramadan sermons of the fourteenth-century Sufi mystic Shuʿayb al-Ḥurayfīsh (43-57). Jussi Hanska argues that Thomas Aquinas was a crucial figure in the development of Lenten catechical preaching (59-73). Andrea Giraudo introduces key features of vernacular Waldensian preaching in the later fifteenth and early sixteenth centuries (75-89). Valentina Bernardini looks at performance and performance indicators in Good Friday sermons from fifteenth-century England (91-110). Carolina M. Losada explores themes of food and abstinence in the preaching of Vicente Ferrer (111-124). Pietro Delcorno introduces an early fifteenth-century preaching cycle centered, remarkably, on Dante's Commedia (125-143). Stefan Visnjevac examines a Lenten model sermon collection by the fifteenth-century Dominican Leonardo Mattei da Udine (145-165); Coralba Colomba does the same for a Lenten sermon of 1456 by the great reformer and polymath, Cardinal Nicholas of Cusa (167-179). Giulia Foladore explores fasting as a theme in the reportatio of a sermon cycle by Bernardino da Siena (181-208). Francesco Nocco and Filippo Sedda offer a synopsis of themes in the Lenten sermons of Giacomo della Marca and two Lenten cycles by Giovanni da Capestrano (209-241). Giacomo Mariani discusses the widely popular Quadragesimale de poenitentia of the fifteenth-century Franciscan Roberto Carracciolo (243-259). Lorenza Tromboni looks at food metaphors and reform in the Lenten preaching of Girolamo Savonarola (261-276). Rita Voltmer examines the career of the fifteenth- and early sixteenth-century Strasbourg preacher Johannes Geiler, with special attention to the composition, performance, and recording of his sermons (277-291). Michele Camaioni explores the place of Lenten preaching in the context of ecclesiastical and societal reform in sixteenth-century Italy (293-311). Finally, Joachim Werz investigates three sixteenth-century Lutheran preachers and their construction of Lutheran concepts of fasting by way of their fierce polemics against Catholic fasting concepts and practices (313-325).

Collectively, the contents reveal the inextricable links between preaching and fasting, and the myriad ways, both literal and metaphorical, in which the latter was understood by preachers and their audiences - up to and including the point at which the sermon itself might be seen as a kind of spiritual food to sate the hungry souls of the faithful as they prepared for the celebration of Easter. Though ambitious and wide-ranging in its scope, the book is not intended as the last word, but rather as "a first step towards the systematic study of this vast area of research" (13). As first steps go, this is a big one; I sermoni quaresimali establishes a solid foundation for further research. The book is handsomely produced, if slightly marred in places by the occasional typographical error; given the book's goal of stimulating further study, it might have benefited from a self-standing bibliography. All in all, this fine collection is a welcome addition to the literature on medieval preaching.