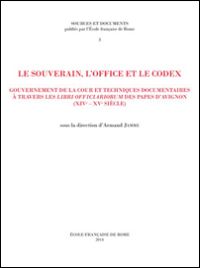 The later Middle Ages witnessed something of a revolution in the conception of formal public authority and the documentary practices associated with it. As was so often the case in the Middle Ages, the Church was at or near the vanguard of many of these new developments, with the popes assuming a particularly prominent and important role. From the time of John XXII (1316-34) especially, the popes at Avignon presided over a major transformation of the Church's international administration, in part because the papacy's seven-decade dislocation from its traditional seat in Rome necessitated it, but also because it consisted with the spirit of the age and with the emphasis on precision and detail that pervaded a curia dominated by men trained in law at the ascendant schools of Montpellier and Toulouse. The construction of the Palais des Papes under Benedict XII (1334-42) and Clement VI (1342-52) was a turning point, establishing a new, fixed locus of papal government that not only permitted, but indeed required both a significant expansion of existing offices and a multiplication of new ones. This in turn engendered new recording practices and new forms of documentation, needed to keep track of a steadily expanding body of papal officers, administrators, and agents. The end result was a corresponding overhaul and expansion of documentary practices and forms, with important and long-lasting implications for the governance of the Roman Church over the course of the next century and a half or more.

The administrative transformation of the Avignonese curia, and its attendant proliferation of documentation, has attracted considerable scholarly attention since at least the time of Guillaume Mollat (1877-1968); indeed, a fascination with documentation is apparent in the work of Étienne Baluze in the later seventeenth and early eighteenth centuries. It is a testament to the scale of the popes' endeavor that considerable work remains to be done. In this volume, published by l'École française de Rome, Armand Jamme and a team of impressively credentialed Avignon specialist (Étienne Anheim, Germain Butaud, and Philippe Genequand) have produced what is sure to become the definitive study of one particular documentary form engendered by the Avignonese administrative revolution, the libri officiariorum.

The volume consists of five edited texts (135-412), spanning the period between 1347 and 1414 and drawn from the Collectoriae and Registrum Avenionensis of the Archivio Segreto Vaticano. These are prefaced by a general introduction by Jamme (1-15) and series of highly informative introductory essays (126-126), offering not only historical but textual and codicological analyses of the edited texts. The contents of the texts themselves are fairly consistent; they are, for the most part, lists appointments to various curial offices, documenting the swearing of formal oaths, and, in many cases, the payment of pledges (vadia) incumbent on the offices in question. But if the nature of the contents remains fairly static, the presentation - the ways in which the material is organized and formatted - evinces considerable experimentation and evolution, as different officials (usually the papal camerarii) cast about for the best and most effective ways to record appointments of personnel in an expanding organizational structure undergoing its own, often significant changes. The volume thus documents the formative processes of an emerging documentary genre, beginning with the liber of Étienne Cambarou (camerarius of Clement VI, during whose pontificate a number of other types of new curial documents first began to appear) and continuing through to the pontificate of the last of the Avignon popes, Benedict XIII (1394-1417), for whom the libri may, among things, have provided a kind of documentary legitimization, linking him to the undisputedly canonical pontificates of his pre-Schism Avignonese predecessors.

It is the stated goal of the editors to present an edition "qui met directment le lecteur en contact avec le document" (15). They have succeeded impressively. The spirit of the École national des Chartes animates the editions of this volume throughout. Using various techniques - different fonts and font sizes, for example, to indicate the involvement of different scribal hands; the careful reproduction and retention of scribal corrections, cancellations, signa, and marginal notations - Jamme and his team have produced an edition which renders the texts accessible to a broad scholarly audience while simultaneously preserving the scribal interventions that recur throughout what were, after all, "living" documents, subject to revision, correction, and alteration, in accordance with the evolving needs of the papal sovereign in whose service they were compiled.

Readers familiar with the publications of the École française de Rome have come to expect products of the very highest caliber from that august venue; this volume is certainly no exception. Jamme and his collaborators have produced a masterwork of technical and analytical scholarship. The editions are flawless, distinguished by meticulous attention to the smallest detail; the introductory materials are extraordinary in their erudition and predicated on exhaustive research. Le souverain, l'office et le codex will prove an invaluable resource for institutional historians in general and for historians of the Avignon papacy in particular.