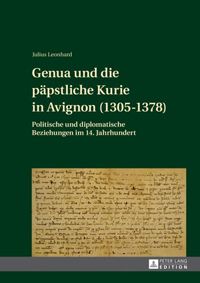 There are no tidy urban histories of fourteenth-century Italy. Factional conflicts, constitutional overhauls, inter-city rivalries, the absence of the papacy, and the recurring incursions of foreign powers all conspired to keep the affairs of the Italian cities in a state of near-constant flux. Genoa was no exception to the rule. Indeed, in Genoa's case, the volatility inherent in medieval Italian municipal politics was further complicated by the city's status as a major commercial center: with financial interests and colonial holdings that stretched across the Mediterranean and into the Black Sea, Genoa was, like its archrival Venice, a city of international import, implicated as much in the affairs of more distant lands as it was in those of Italy. This inevitably affected the nature of Genoese relations with other powers, not least among them the papacy. In this revision of his dissertation, Julius Leonhard undertakes a thorough exploration of Genoa's relations with the papacy during the seven decades of the Avignon period.

Leonhard provides the essential background in useful chapters on the papacy, Genoa, and Italy (chapter 2) and on papal-Italian relations during the Avignonese period (chapter 3). These address Genoa's triumph over Pisa in the later thirteenth century and subsequent emergence as a major Mediterranean power, the larger issues informing Genoese-papal relations at the beginning of the fourteenth century, the mechanisms of diplomatic engagement, and the tangled convergence of factors that shaped relations between the Curia and the Italian powers during the fourteenth century. In the case of Genoa, the rise and fall of contending socio-economic and political factions within the city, the demands of maintaining far-flung interests in the face of ever-changing circumstances across the Mediterranean and beyond, and the changing policies of individual popes, whose priorities could differ significantly from those of their predecessors, all made for particularly complex and kinetic relations with the Avignon papacy.

Leonhard devotes the next three chapters to what he identifies as the three principal phases in the history of relations between Genoa and the papal Curia. The first (chapter 4), spanning the period between the election of Clement V (1305-1314) and the establishment of the dogeship (1339), was a period of exceptional diplomatic complexity, as Genoa continued to expand its sphere of influence and the popes adjusted to what looked ever more likely to be a long absence from Rome. International commerce prompted the rise of great patrician clans (e.g., Doria, Grimaldi, Spinola), whose vexed relations with the popolo were exacerbated by the antipathy of the Guelf and Ghibelline factions. Genoa benefited from the presence at the Curia of a powerful advocate in Cardinal Luca Fieschi (1300-1336), but internal disputes, and the regime changes that they inevitably engendered, precluded the development of a consistent diplomatic policy with respect to the papacy. Genoa was convulsed by the Italian expeditions of two emperors: Henry VII, who attempted without much success to soothe Genoa's internal factional conflicts; and the fiercely anti-papal Ludwig IV. In the time of John XXII the city came under a papal signoria (1318-1334), with King Robert of Naples serving as rector. This inevitably inflamed tensions between the Guelf and Ghibelline factions and accelerated the deterioration of Genoese relations with the crown of Aragon, already strained over conflicting ambitions in Sardinia.

A second major phase (chapter 5) began with the installation of the first Genoese doge, Simone Boccanegra, in 1339. The elevation of a "Ghibelline populist" did not in and of itself necessitate poor relations with the papacy; Benedict XII and Clement VI were far less urgently concerned with the Guelf / Ghibelline conflict (and the costly campaigns attached to it) than John XXII had been. Still, Boccanegra stirred up internal troubles by excluding the mercantile patricians from government and exasperated the popes with his expansionist ambitions; the inevitable strains on Genoese-papal relations were aggravated further by Genoa's reluctance to take part in a crusade against Smyrna, that threatened to upset the delicate balance of Genoese interests and holdings in the East. Under constant pressure from his patrician opponents, Boccanegra was forced out of office at the end of 1344; the political situation in Genoa worsened during the Black Death, which ravaged the city and claimed the life of Boccanegra's successor, Giovanni de Murta, and the opening of an ultimately unsuccessful war with Venice and Aragon. By 1353 the threat of civil war and the machinations of Genoa's exiled magnates had forced the city into the arms of the Milanese Visconti, who ruled the city - palatably enough, for the popes, in the final year of Archbishop Giovanni Visconti; less so in the early reign of his nephew and successor, Bernabò - until 1356. The Visconti signoria ended with the restoration of Simone Boccanegra, whose second term marked a significant improvement in relations with the papacy.

Boccanegra's assassination in 1363 inaugurated a third phase (chapter 6), which lasted until the death of Gregory XI in March 1378. Genoese-papal relations remained contingent on the vicissitudes of now familiar factors - factional strife within Genoa; the tortuous politics surrounding the dogeship; troubles with Venice and Aragon - but the dominant issue, inevitably, was the papacy's long-awaited return. Genoa found itself among a select group of cities on whose support and cooperation the popes placed a particularly high premium. Both Urban V and Gregory XI stopped there during their return journeys, after extensive diplomatic negotiations with Doges Gabriele Adorno and Domenico Campofregoso. For Genoa, the papacy's return presented both opportunities and problems: while the city welcomed the potential benefits of a special relationship with the popes, it was reluctant to appear - and much less to become - overly dependent on the restored papacy. Leonhard wisely devotes a separate chapter (8) to Genoese-papal relations concerning Cyprus, where the steady growth of Genoese influence over the course of the fourteenth century impinged directly on papal crusading initiatives. An additional chapter examines relations in the early stages of the Schism - clearly a subject worthy of its own monograph - before the conclusion in chapter 9.

Leonhard has drawn on a remarkable body of sources, including all of the pertinent Genoese archival materials (the vast majority of which remain unedited) and the Vatican registers, which he subjects to a close, disciplined, and consistently well-informed reading. Leonhard argues convincingly that, given the extent of the Genoese sphere and the objectives of the fourteenth-century papacy, relations between Genoa and the Avignonese Curia had a special significance throughout the fourteenth century. Genua und die päpstliche Kurie in Avignon is a masterful case study on the methods and objectives of fourteenth-century diplomacy, as evinced with respect to two particularly important powers; but it is more than that. In tracing Genoa's relations with the papacy, Leonhard also makes an important contribution to the historiography of fourteenth-century Italy by providing an invaluable overview of the Republic's internal history during a critical period in Italian history.