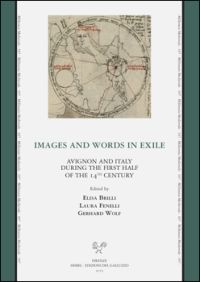 This volume was conceived in the spring of 2011, when a group of international scholars travelled from Florence to Avignon. The journey itself - the act of moving from one cultural, linguistic, and historical realm to another - may account for the conceptual construct that unites this valuable collection of essays. The early fourteenth century was indeed an age of widespread displacement, as the relocation of the Curia and the fierce factional controversies within the Italian cities unmoored both people and longstanding assumptions about the relationship between the location of the papacy and the bases of its legitimacy. As the various essays in this collection make clear, the notion of exile came to occupy a central place in the Italian imagination, and, to a somewhat lesser but still significant extent, in the curial imagination as well.

Gerhard Wolf remarks in a postface on the conceptual breadth of a theme like "exile," on the great variety of early fourteenth-century thinkers and artists who employed its rhetoric and imagery, and on the folly of trying to impose too narrow a theoretical framework on the contents of the volume (537). The editors have wisely adopted a broad understanding of the concept and allowed the authors, all established scholars in their fields, to follow along a great many paths that emanate from it. Some essays explore the theme of exile in what might appear at first glance to be tangential issues; others challenge the very concept, and in so doing help to expand and refine it. In one important essay (241-257), Agostino Paravicini Bagliani rejects the very idea that the Avignon papacy should be considered in terms of "exile" or "captivity" and situates it instead in a historical context extending back to the thirteenth century, when the popes quite frequently found it necessary to leave Rome (albeit considerably more temporarily than their fourteenth-century successors) for safer locales - to each of which the popes brought with them a clear sense of ubi papa, ibi Roma: viz., that "Rome" was wherever the pope happened to be residing at the moment. When one considers that the thirteenth-century popes spent a total of more than sixty years outside of Rome, the papacy's seven decades on the Rhône are not enough to justify a perceptual difference that may owe too much to Petrarch's famous lament about the "Babylonian Captivity" of the Church.

The essays are grouped into five discrete sections, four of which begin with a formal introduction. (The exception is Part III, for which the inaugural essay by Paravicini Bagliani plays an analogous role.) Part I, Exclusion and Self-Exclusion from the «Civitas» (1-125), comprises eight essays that provide a historical and conceptual foundation for the volume as a whole. Notions of exile and displacement pervade a variety of subjects: factional expulsion in the Italian communal cities; the development in Italy of a formal iconography concerning traitors; the condemnation of the Templars, and the order's artistic and iconographic legacy; the ways in which contemporary scriptural commentaries helped to shape a fourteenth-century conceptualization of heresy; the conflict between John XXII and Ludwig IV, and its role in generating new ideas and imagery concerning the Antichrist; themes of persecution in Franciscan Spiritual responses to the controversy over Apostolic Poverty; monastic inclusion and self-exclusion in three Bolognese versions of the life of the late antique hermit St Onuphrius. These seemingly disparate essays serve to limn the broad parameters of potentially amorphous but vitally important ideas about exile, alienation, and exclusion, both compulsory and otherwise.

The second part, Displaced Persons (127-237), explores the phenomenon of literal displacement in early fourteenth-century Italy. The victims of Florence's political upheavals are particularly well-represented here: three essays are devoted to Dante, the quintessential and paradigmatic exile; two others focus on Petrarch, for whom Dante's exile provided a sort of autobiographical template; another treats Francesco da Barberino, a contemporary of Dante who likewise channeled the anguish of exile into literary expression and, like Petrarch a generation later, found refuge from his wanderings for a time at Avignon. The eccentrically original Opicino de Canistris, who was driven from his native Pavia in 1315, moved to Avignon in 1329 and spent the final generation of his life there, is the subject of another. In each case, the experience of exile left indelible traces on the literary and iconographic work of the subjects in question.

Part III - Avignon: The Making of a Capital (239-357) - examines the conceptual, demographic, social, economic, and artistic implications of Avignon's transformation into the hub of the Western Church. The idea that the pope could "rule," in effect, from outside of Rome had thirteenth-century precedents, but the length of the popes' stay in Avignon prompted local changes far more significant than those that took place in thirteenth-century Viterbo, Orvieto, or Lyon. Substantial immigration altered the social contours of the city; the new arrivals included merchants and bankers (e.g., the Florentine Frescobaldi family), who helped transform Avignon into an important economic center. Major building and renovation programs altered the physical city (most strikingly, of course, in the case of the imposing papal palace) and inevitably attracted an influx of painters, sculptors, manuscript illuminators and other artists, mainly from Italy, who introduced new artistic styles and iconography.

The fourth part, Exchanging Glances (359-450), traces the extensive and sometimes surprising links between Rome, Naples, Florence, and Avignon. The career of Simone Martini is perhaps emblematic of the new dynamic: whereas gifted Italian artists of a generation earlier (or a century later) might have hoped to crown their careers with a series of curial commissions in Rome, success led Martini in the end to Avignon - and in the process introduced him to important new aesthetic and iconographic forms. Sometimes the links are forcefully clear, as during the five-year period during which the Neapolitan King Robert I resided with his court at Avignon, but they are discernible even in less obvious and direct points of contact (as is evident, for example, in the last will and testament of Robert's mother, Maria of Hungary). Though resident in Avignon, the popes continued to patronize artists and architects in Rome, to a greater degree than the literature has tended to allow, and the experience of exile, or at least the perception of it, spurred important artistic developments in Florence and elsewhere in Italy.

The fifth and final section, Mapping Avignon's Space (451-546), reveals the various ways in which the transformation of the city - and the displacement that made it possible - informed new ways of thinking about place and space, both literal and figurative. The registers of John XXII reveal how the papacy's "exile" from its traditional seat on the Tiber to a new one on the Rhône altered perceptions of the relationship between the new geographical center of the Church and other parts of Christendom. Relocation also necessitated the development of new, "courtly" ceremonial activities designed function in the spaces of the papal palace and not in the public spaces between the great Roman basilicas, with inevitable consequences for both ceremonial life and architecture. The papacy's new geographical location led to the formation of new regional relationships and new pathways of cultural transmission; this is apparent in the emergence of artistic links between Avignon on the one hand and the Iberian kingdoms of Catalonia and Majorca on the other, and in the consolidation of complex stylistic axis linking artists of the Midi and central Italy.

It is appropriate, perhaps, that the most prominent voice in this trilingual collection is Italian: 20 of the 34 essays, as well as the general introduction and the postface, are in the tongue of Dante and Petrarch, with eight in French and six in English. Each essay includes a brief abstract, in English. While there is great topical variety to the essays in the collection, the quality of the scholarship is consistently high - not always the easiest accomplishment in an edited volume. The book is carefully produced and physically attractive, with a collection of 17 color plates at the end; careful editing has kept distracting typographical errors to a minimum. Images and Words in Exile is a valuable addition to the literature on the Avignon papacy, though it will also offer much to scholars interested in the predicates and mechanics of cultural and intellectual transmission. Most crucially, its broad and richly interdisciplinary approach may open up new topical and methodological vistas for students of the phenomenon of exile in the later Middle Ages.