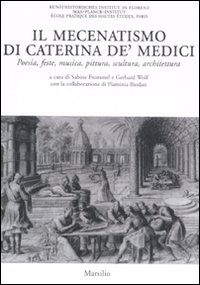 This volume compiles contributions based on presentations given at the international colloquium held in September 2005 at the Kunsthistorisches Institut of Florence and organized in collaboration with the École Pratique des Hautes Études de Paris. Dedicated to Catherine de Medici's patronage of the arts, it is composed of twenty essays written in French, Italian and English and is organized in four sections focusing on literature, music and court festivities, collections and visual arts, and architecture.

The evolution of Catherine's complex patronage, highlighted by Caroline zum Kolk in her study of the queen's correspondence, is first approached through its impact on literature. The role court poets played in shaping her image and reputation, for example, is discussed by Jean Balsamo who looks at the shift from early sycophantic verses celebrating France's new Juno to later political pamphlets focusing on the queen's Italian origins, and discusses her limited role in the introduction of Italian elements in French literature. This contribution is important for it presents the reader with the Italian component of Catherine's patronage, a theme that regularly reappears throughout the rest of the book. Her interest in literature is also brought to light by Isabelle de Conihout and Pascal Ract-Madoux in their discussion centered on her important book collection, and the elaborate emblems of her books' bindings.

The section dedicated to festivities and music, explores the representation of the royal persona and investigates Catherine's keen understanding of politics and the power of visual propaganda as illustrated in the complex iconographic program of the cartoons for the "Histoire françoyse de nostre temps"-tapestries discussed by Barbara Gaehtgens. Two essays, by Sara Mamone and Martine Boiteux, look at the intimate relationship Catherine maintained with her country of origin as she kept herself informed of Italian artistic innovations. The queen, strongly influenced by the cultural environment of her childhood, is presented as playing an important role in the merging of French and Italian traditions. This appears also particularly relevant in music as shown by Pierre Canguilhem who notes that Italian violin players came to play a central role in the development of the ballet de cour under Catherine's auspices. This typically French form of entertainment would later make its way to Florence where it was introduced by Christine de Lorraine, Catherine's granddaughter and the wife of Grand Duke Ferdinando de' Medici, in a move characteristic of the cultural exchanges between France and Italy.

The last two sections of the book focus on the visual arts and architecture, first considering Catherine's collections and her impact on French painting and sculpture. While the content of the cabinet de curiosités at the hôtel de la Reine has long been known thanks to the inventory made after Catherine's death, Margriet Hoogvliet proposes that the objects' careful selection is symbolic of her desire to assert her intellectual reputation and political discourse. Alexandra Zvereva's contribution also emphasizes the political subtext of many of Catherine's endeavors and the role she played in defining French Renaissance portraiture. Many of these images, she argues, were created as a way for Catherine to affirm her role as guarantor of the permanence of the Valois dynasty. They also offer a glimpse at Catherine's promotion of the status of women at court best exemplified by the portrait of Claude de Beaune, one of the queen's ladies in waiting. Like many Renaissance women of power, the queen also learned to manipulate her appearance as a means to build a powerful persona. Monique Châtenet for example, shows how she played an important role in the evolution of the queen of France's coronation garb by being the first to wear the blue cloak embroidered with fleurs de lys that later became a conspicuous symbol of French royalty.

The book aims at promoting Catherine's multifaceted interest in the art and extensive control over her commissions. The role played by Primaticcio and his followers in several of her endeavors is discussed by Dominique Cordellier and Bernadette Py in two essays dedicated to the Italian artist's work at Fontainebleau and Écouen. Cordellier's identification and attribution of new drawings for the decoration of Catherine's farm at la Mi-voie and stained glass windows at Écouen allow for a better understanding of some of the major commissions of the period. Along with painting and drawings, sculpture appears to have been one of Catherine's domains of predilection, and her almost obsessive passion for marble, highlighted by Geneviève Bresc-Bautier, led to the creation of some of the most remarkable sculptures and monuments of the French Renaissance.

Appropriately, the book ends on a series of texts dedicated to Catherine's impact on French architecture, certainly the most visible aspect of her patronage, and the most emblematic of her use of the arts as part of her political discourse. While many of the buildings the queen commissioned have been destroyed, their design played an important role in the development of French architecture during the late Renaissance in France. Most of Catherine's architectural enterprises followed Henri II's death in 1559 but Vincent Droguet highlights the key role of her early projects, such as Philibert Delorme's grotto for Montceau-en-Brie, played in her formation as an art patron. Droguet also offers new information about the dairy of la Mi-Voie, a model farm near Fontainebleau, whose decorative program by Primaticcio and his team is characteristic of the refinement of Catherine's commissions. Sabine and Christoph Luitpold Frommel discuss later projects such as Saint-Maur, Chenonceau, the Tuileries and the Valois mausoleum in two essays looking at the impact of Italian prototypes on French architecture, and how some of these projects were designed to rival the residences of other Renaissance leaders (Primaticcio was sent to Italy so he could get a firsthand experience of the new trends) by connecting them to the Palazzo Te in Mantua and the Pitti Palace in Florence for example. C.L. Frommel also looks at the château de Charleval, a grand project initiated during the reign of Charles IX, which he assigns to Jean Gallia, and which he considers to be the first example of a complete synthesis of French and Italian traditions characteristic of Catherine's political and artistic visions. Offering a more intimate look at French Renaissance artistic production, Luisa Capodieci discusses in a remarkably well-documented essay, the neoplatonic symbolism of the décor of Henri II's bedroom at Fontainebleau.

The diversity and richness of the essays, as Henri Zerner states in his conclusion, play a significant role in asserting Catherine de' Medici's role as a major figure of Renaissance patronage. However, the book suffers from a couple of flaws that can perhaps be attributed to its format as a compilation of papers originally delivered at a colloquium. For example, S. and C.L. Frommel's texts heavily emphasize the queen's Italian heritage and Italian influence on her commissions (most specifically that of Michelangelo). By doing so, they appear to lessen the role played by French artists whose works foster the equally important local tradition, and minimize Catherine's catalytic role in the development of French Renaissance. Additionally, Flaminia Bardati's look at the Cardinal de Bourbon's château at Gaillon, Martine Boiteux's essay on patrons and festivals in Rome in the 16th century and to a lesser extent, Châtenet's contribution, while interesting in setting Catherine's cultural environment, appear only marginally relevant to a study dedicated to her patronage as the title leads one to believe. The book is clearly geared toward an academic readership and as such would have benefited greatly from an index. It is nonetheless an important source on the topic as it highlights Catherine's ability to surround herself with exceptional artists and understand the political potential of the arts, and constitutes a welcome addition to a growing corpus of studies dedicated to female patronage.