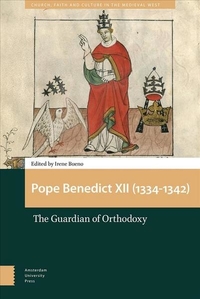 Poor Jacques Fournier. As Benedict XII (1334-42), the third of the popes of Avignon and one of only two popes from the Cistercian order, he has long found himself mired in something of a historiographical slough between the high-profile pontificates of his combatively energetic and long-reigning predecessor, John XXII (1316-34), and his magnificently princely successor, Clement VI (1342-52). Often seen as a well-meaning if rather rigid and ultimately unsuccessful or even somewhat feckless pontiff, he remains best known, perhaps, for the voluminous and much studied inquisition registers he produced during his tenure as bishop of Pamiers (1317-26). As pope, he has been remembered, not so much for what he did as for what he did not do: he did not continue John's ambitious and expensive policy in Italy; he did not succeed in averting the outbreak of the Hundred Years' War; he did not return the papacy to Rome. In this volume - the first complete study of Benedict's life and career in more than a century - Irene Bueno and her collaborators re-examine Benedict's pontificate on its own terms, seeking "not only to meet the challenge of offering a comprehensive overview of Benedict's life and reign but also to address specific facets of his pontificate which have not yet received the attention they deserve" (19).

In the introductory chapter, Bueno offers a brief biography of her subject and lays out the structure of the book (13-26). As bishop of Pamiers, Jacques Fournier undertook a famous investigation into heretical activities in the Ariège and established himself as one of the most zealous and effective inquisitors of the early fourteenth century. Elizabeth Sherman examines Benedict's work as an inquisitor bishop, arguing that his procedural innovations (including far more detailed depositions and confessions than his thirteenth-century predecessors produced) responded to important changes in the nature of heresy in the Midi during the early fourteenth century, as the numbers of heretici continued to dwindle (27-56).

Benedict XII was the first theologian pope since Benedict XI (1303-04), and two chapters concern themselves with his theological legacy. As magister sacri Palatii, Jacques Fournier was effectively John XXII's official court theologian, though much of his theological output has subsequently been lost. In a translation of a 2008 French article, Sylvain Piron introduces a fragmentary opinion, produced for the trial of Peter John Olivi's Commentary on the Apocalypse, which he attributes convincingly to Jacques Fournier (57-79). As pope, Benedict was left to contend with the fallout of John XXII's provocative statements on the Beatific Vision; Christian Trottmann examines Benedict's role in the controversy. Highly original in the theological opinions he produced on the matter while still a cardinal, Benedict took up a more moderated position in the constitution Benedictus Deus (1336), in the interest of bringing the whole messy business to a definitive conclusion (81-106).

After the collapse of John XXII's Italian policy, Benedict was forced to accept that the papacy might find itself in Avignon indefinitely; three chapters address various aspects of this important development. Valérie Theis treats the construction of the palais des papes, which Benedict intended as a new administrative center for the Church, and Benedict's reorganization of the turbulent Comtat Venaissin in hopes of providing the papacy with the resources and security it needed to function effectively (107-129). Claudia Bolgia examines Benedict's best known portrait, a half-length image in Old St Peter's by Paolo da Siena, in the style of Arnolfo di Cambio's famous portrait of Boniface VIII, situating it in its original programmatic context, and reveals how it was meant to communicate the absent pope's commitment to distant Rome and its great basilicas (131-165). In the larger Italian arena, the pacific Benedict was much more inclined to appeasement than his bellicose predecessor had been, and rather less inclined to equate signorile government or communal rebellion automatically with heresy; unlike John XXII, he did not rely on controversial cardinal-legates, preferring instead to rely on "nuncio-reformers" as agents of diplomacy in the peninsula. In the end, Benedict's Italian policy proved no more successful than John's had been (Sylvain Parent, 167-190).

Of course, Benedict's political interests extended beyond Italy, as the final three chapters clearly demonstrate. In what has been seen as perhaps the signal failure of his pontificate, Benedict could neither prevent the outbreak of the Hundred Years' War nor, after 1340, bring it to an end. Barbara Bombi provides a detailed account of Benedict's attempts to avert war between England and France, and concludes that his "failed attempts at preventing the outbreak of the Anglo-French conflict" derived from both the overwhelming complexity of the diplomatic situation and "the inability of the late-medieval papacy at carrying any political weight before the secular rulers rather than Benedict XII's personal miscalculation of the circumstance" (216; 191-216). Distracted by other priorities (including the Hundred Years' War and the reform of the religious orders), Benedict devoted considerably less attention to the all-important matter of the eastern Crusade than his predecessor and successor did, though he supported crusading initiatives in Iberia and northeastern Europe (Mike Carr, 217-240). Finally, Irene Bueno undertakes a comparative analysis of Benedict's contacts with the diverse peoples of the partes Orientis; "non-Catholic, 'non-properly' Catholic, and non-Christian populations such as the Greeks, the Armenians, and the Mongols occupied very different positions in the confrontation with the Roman Church - eliciting varied diplomatic and intellectual responses by the Holy See" (265; 241-267).

The sum of the parts is a long overdue exploration, by leading scholars in the field, of an important if somewhat neglected papal career. The book might have profited, perhaps, from the inclusion of a chapter on one of Benedict's signature initiatives, his sometimes controversial reforms of the religious orders, or one on his tortuous and ultimate fruitless attempts at reconciling with the emperor, Ludwig IV of Bavaria; it might have been nice to hear more about the Cistercian vocation that was so instrumental in shaping Benedict's thought and character. One of the great benefits of this volume is that it updates the scholarly literature on Benedict's life and career; in the further service of this endeavor, a self-standing bibliography would have made for a nice addition to the book. But these are quibbles; Pope Benedict XII (1334-1342). The Guardian of Orthodoxy is an excellent piece of scholarship and a most welcome addition to the literature on the Avignon papacy. Bueno and her collaborators are to be commended, not only for rescuing Benedict from the relative obscurity in which he has languished for so long, but also for reconsidering his entire pontificate and its legacy in light of new directions in scholarship.