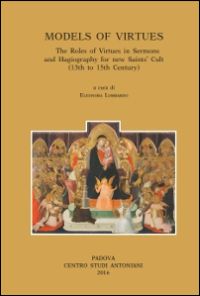 This collection of studies represents papers given at a conference at the University of Oporto on March 22-23, 2013. The collection contains studies on little known saints and those with widespread devotion. As the title of the book indicates, the focus in all of them is how each saint was proposed as model of the virtuous life. In some cases little known sermons are brought to the attention of the reader. In terms of geographical distribution, major areas of Europe are well represented: England, Spain, Portugal, Italy, Poland, Hungary, and France. The saints highlighted originate from multi-varied backgrounds, not all of them were religious.

The title needs some clarification; some of the saints profiled are hardly 'new saints' as indicated. Some chapters have as their subject Thomas Becket, Francis of Assisi, Anthony of Padua, and Clare of Assisi. In the case of these already renowned saints, the authors articulate further developments of their cult in the late Middle Ages. Some essays present us with 'new' saints as in the case of the canonization in 1450 of the Franciscan Bernard of Siena (Delcorno). In some essays, the reader is introduced to little known persons - at least to people in our day - such is the case of the Spanish Dominican, Dominic of Calaruega (Berardini), who was celebrated by Dante in the Paradiso XII. It is in this essay that St. Vicent Ferrer receives brief consideration. Some scholars in the volume are well established ones that are well known to those of us who work with sermons: Nicole Bériou, André Vauchez, Aires Augusto Nascimento and Pietro Delcorno. The book is not for the ordinary reader since it requires a good reading knowledge of French, Italian, Portuguese, and English to navigate these highly specialized essays. The diversity of languages of the essays does not result in awkward disparity of styles and expression, they flow remarkably well. I will now offer a few words on each essay to highlight its central focus. Fortunately for the reader all of them contain an abstract.

Introduzione  Eleonora Lombardo opens the volume with an overall reflection of modern sermon studies and how the ensuing essays contribute to this ongoing work that deftly locates them in current historiography. Nicole Bériou's,  "Les vertus des saints dans les sermons de l'archêveque de Pise Federico Visconti (1253-1277)" explores the role of the virtues in a broader sense in raising questions that are relevant to all who work with medieval sermons. Franco Morenzoni in,  "Hagiographie, pastorale et histoire dans les sermons pour la fête de saint Thomas Becket (XII° - XV° s.)" engages the many themes that sermons about Thomas - which are considerable - contributed to his cult and became instructive to clergy and laity. André Vauchez in his short essay, "Les vertus dans les écrits de S. François d'Assise et quelques textes hagiographiques franciscains du III° siècle", delves into Francis' teaching on vice and virtue in his Admonitions and Salutation des vertus written between 1220-1224. Eleonora Lombardo in one of the longer essays, "Multipliciter commendatur beatus Antonius.  Sant' Antonio di Padova modello di virtù per i frati minori" maintains that sermons and hagiography demonstrate how Anthony was an important model for Franciscan friars. At the end of the thirteenth century and first half of the fourteenth, new models of holiness put him in the background. Alison More's chapter, "Clara in natura, clarior in fama, clarissima in gratia. Clare of Assisi and Franciscan Virtue in Later Medieval Sermons" fleshes out the shifting images of virtue attributed to Clare in sermons from the thirteenth through the fifteenth centuries and how it affected her cult. Giovanni Paolo Maggioni, in his dense essay  "La figura di Pietro martire nelle raccolte di sermoni 'de sanctis' di Iacopo da Voragine. Considerazioni e testi (volumen diffusum, s. DSD 176, 177; volumen breve s. DSB 430)" identifies the virtues attributed to Peter Martyr in the volumen diffusum of Jacobus of Voragine that was intended for Dominicans to equip them in their struggle against heresy and to promote ethics and sound doctrine.

Stanislava Kuzmova in  "St. Stanislaus of Cracow as a Model of Virtues in Sermons and Hagiography" introduces us to a new saint - a bishop/martyr canonized in 1253 about whom little was known when he was canonized. Details about his life surfaced in the thirteenth and fifteenth centuries inspired by local tradition. This study examines the latter tradition as found in a collection of 86 Latin sermons. Sophie Delmas, in her fascinating study "'Entre l'Eglise et l'Etat.' Les vertus disputées de Louis d'Anjou, prince, franciscain et evêque" describes the process of canonization of Louis of Anjou, who was a prince, Franciscan, and Bishop; thus exhibiting not the typical candidate for sainthood; Aires Augusto Nascimento in the essay,  "Un canon de vertus d'un saint laïc: la leçon d'un roi pour Nuno de Sainte Marie" examines the canonization of the Portuguese Nuno of Santa Maria (birth name Nun'Alvares Pereira) that started soon after his death. The text that is the object of this essay is a prayer written by D. Pedro that he sent to D. Gomes Eanes, abbot of Florence in 1437, where the virtues of Nuno are summarized. Maria de Lurdes Rosa wrote the essay "King Duarte's guidelines for the sermon at the funeral of king João I: An exemplary king, not a royal saint" that is related to the one before by Aires A. Nascimento. It includes guidelines for sermons preached twice at the funeral of Nuno Alvares Pereira and the monarch D. João I. Her main focus, however, is on King João I's sanctity that made him an exemplary king but not a saint. Isabel Dias's study,"Le sermon 'De sanctis martyribus quinque fratribus' de Pelbart de Themeswar" is a study on a sermon by the Hungarian Franciscan Pelbart de Themeswar written at the end of the fifteenth century. The article is accompanied by the text of Sermo XLVI. Valentina Berardini  in her "Dominic of Calaruega.  The man, the Preacher and the Saint" brings to light for the reader a little known Spanish Dominican who in his day was hardly unknown. The study sets forth how Dominic of Calaguera was described in sermons about him by Vicent Ferrer, Gabriele da Barletta, Gorilamo Savonarola and the Franciscan preachers, Bernardino da Siena and Roberto Caracciolo. Attention given by these prominent preachers confirms the popularity of Dominic. Pietro Delcorno in a detailed essay, "O felix adulescentia Bernardini! O ardentissima caritas cordis eius!  San Bernardino da Siena come modello per i laici" is the only one to include several full color plates that depict scenes from the life of Bernardino of Siena. He was canonized in 1450 and was proposed as an inspiration and re-founder of the Franciscans. His life as a layman before entering religious life was also presented to inspire the laity. The chapter explores this little studied aspect of his life; Paula Almeida's contribution "'Comprar virtudes com pouco preço, e ter o céu de graça'. Algumas notas sobre a questão da 'heroicidade de virtudes' em 'Vidas' devotas em Portugal (séculos XVII-XVIII)" takes the reader back to Portugal from the XVIIth century during the pontificate of Urban VIII, through the XVIIItth century. The paper focuses on the theological and moral virtues of men and women requisite for beatification and canonization.  Antonio Rigon in  "Postfazione" writes a global synthesis of all of the essays in this fine volume. This is a welcome addition that is rare in collected essays volumes that often times leaves the reader wondering what exactly has been advanced on the proposed overarching topic; that is not the case here.

The most surprising omission in this volume is Vicent Ferrer, the most celebrated Dominican preacher of the late Middle Ages, who unfortunately did not receive an entire essay, notwithstanding that he preached a good number of hagiographical sermons mainly in Catalan. This lamentable omission aside, this is a most interesting and informative volume that will delight readers with much innovative research.

The editors have compiled several indexes to facilitate the work of those who consult this volume. The manuscript index is a very useful apparatus for those who would want to consult the manuscripts directly. The bibliography is broken down into several parts. The first is a complete inventory of the original sources utilized by the authors. There is also a full accounting of the secondary sources. Those who consult this volume have plenty of material to pursue additional in-depth research. Lastly, the editors have compiled an index of every person and place-name in the book. Congratulations are in order to the authors, editor, and the Centro Studi Antoniani for producing this excellent collection of essays.