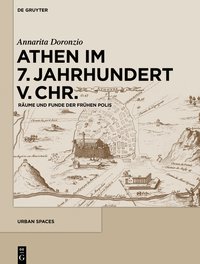 This is a wonderful book. Part of the pleasure it gives comes from the unexpected choice of subject. There are many centuries in which it is obvious that Athens is a fascinating and rich topic for investigation - but the seventh century BCE is not one of them. Ask an ancient historian to tell you about seventh-century BCE Athens and they will come up with little beyond the failed coup of Kylon and the possible invention of the archonship. Ask a classical archaeologist, and they will immediately go into negative mode: the number of graves is much lower than in the eighth century; Protoattic pottery has been found so much outside Athens that scholars have seriously proposed that some of it was actually made on Aigina; there are no sanctuary buildings on the Acropolis and no dedications worth mentioning; there are no traces of defensive walls. It is all this naysaying, some of it by me, that has fired Doronzio into action. This book is intended as a definitive answer.

The next source of pleasure is the intelligence and sensitivity with which Doronzio has carried out her mission. This is not a work that simply tells you what there is in seventh-century Athens, starting from the Acropolis and working through the Kerameikos, the Agora, the north and south banks of the Ilissos, and the region south of the Acropolis. This is a work that actually shows you what there is. I count 269 illustrations in addition to the 20 plans etc. at the end of the book. Doronzio has mastered all the material and all the scholarship, and the material itself and the scholarly debates around it are presented with exemplary clarity.

It is worth stressing Doronzio's willingness to discuss archaeological material of all sorts. This is not merely an account of excavations. Nor does it limit its view to ceramic finds. Finds of all sorts are discussed, and indeed stressing the full range of finds, often hidden in specialist studies, is one of the book's strengths. This might have gone even further. Doronzio is willing at particular moments to discuss the iconography of the pottery found at various sites, but there is rather less contextualising of the iconography than might have been done.

If there is a complaint about what the reader is provided with, it is that the Index is spare. This is an index of proper names: no good looking here for 'burials' or 'cult', let alone for 'gender' or 'women' (there are indeed no entries at all for any word beginning with 'F'). It is also an index that expects the reader to be intelligent: one can find out where the discussion of the Acropolis, or Kerameikos, is by looking in the Contents page, so you will not find any entry for any region of Athens in the index. But for all that it is spare, the Index is effective: intelligent readers can, with a bit of imagination, certainly use it to find discussions that they have read and want to find again. It is, in particular, excellent at enabling one to find where Doronzio discusses the archaeology of Attica, rather than of Athens itself, though this has to be done by looking up individual Attic locations.

The book is, then, a wonderful compendium. But it is more than that. Doronzio has strong views. You will find here the firmest response yet to John Papadopoulos's suggestion that the area of the classical Agora was no fledgling civic centre in the archaic period, but rather an area dominated by industrial use and in particular potteries. Doronzio insists that the later Agora area contained a large open area already in the seventh century, and suggests that the Athenian citizen body already met there. Others' suggestion that the civic centre was elsewhere gets short shrift, partly a result of the necessarily positivist way in which exposition proceeds: if there has been nothing excavated in an area, there is nothing to discuss.

This argument about the Agora goes together with Doronzio's willingness to construe the remains from the area of Kynosarges as showing the presence of a cult of Herakles there already in the seventh century. That is, Doronzio is very happy to read back what we know of sites' later use into the seventh-century remains, and arguments that begin very tentatively get repeated much more forcefully in the conclusion (and in the English summary). So we turn from being told that the possibility of a cult of Herakles at Kynosarges 'nach meinem Dafürhalten nicht als unmöglich betrachtet werden' (246) to 'Das Herakleion hatte wahrscheinlich auch eine Rolle für die Integration von Fremden gespielt' (289).

The reason for these strong views emerges only at the end of the book. Doronzio's book is not merely an exposition of seventh-century Athens, it is an argument that I was wrong, in 1989, to reckon that in the seventh century the going was being made in Attica, rather than in Athens. Doronzio wants a civic gathering place in the Agora, and a sophisticated structure in which there were specialist places even for non-Athenians to be assimilated into Athenian society, in order to show that Athens was indeed more important than, and indeed taking the lead for, the rest of Attica. In particular Doronzio wants to have shown that 'auch im Herzen des wachsenden urbanen Zentrums bereits Kulte belegt sind, die als gesamtstädtisch definiert werden können' (283).

It is here that the book over-reaches. If we are to understand the relationship between Athens and Attica, then we need to look at both Athens and Attica. If, thirty years ago, I undoubtedly underplayed what we could say about the Acropolis, in particular, Doronzio here tries to draw conclusions on the basis of Athens alone. She is well aware of what is happening elsewhere in Attica, but it lies outside the scope of the book to investigate it in any detail. But how can we know whether a cult is performing more than local functions unless we know what functions are being performed in other locations? We know, for all that the publication of their excavations leaves much to be desired, that Eleusis and Brauron, as well as Mounychia and Sounion and Pallene, are major cult centres active in the seventh century - even leaving aside the various hill-top shrines that particularly popular at this period. We need to look closely at what has been found there if we are to know whether they too performed 'central' functions and lay at the 'heart' of Athenian life.

The very virtues of this book leave us hungry for more, and in this case hungry in particular for a similar treatment of Attica, something that would be a distinctly more difficult challenge. As Doronzio's own attempts to say more in the concluding chapter indicate, however thorough a discussion of the town of Athens is, and it is hard to imagine a more thorough discussion than this, the questions that that discussion can answer are strictly limited if the town itself is all that is discussed.