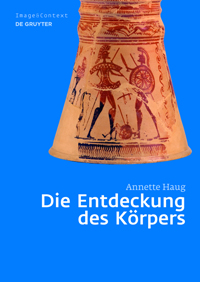 The title of this book invites comparison with Bruno Snell's Die Entdeckung des Geistes (Hamburg, 1946). How do the books compare? To begin at the end, Snell's book had an index, in fact it had three (Personen und Begriffe, Zitate, Griechischer Wörter). Haug's book has no index (but see below). In total Snell's book amounted to 246 pages, Haug's has 773. Snell had no pictures, Haug has 346 numbered black and white photographs, plus some that are not numbered. Both books have limiting sub-titles: Snell's (advertised on the front cover) is Studien zur Enstehung des europäischen Denkens bei den Griechen; Haug's ([sheepishly?] found only on the inside title page) is Körper- und Rollenbilder im Athen des 8. und 7. Jahrhunderts v. Chr. Snell's book covered the whole of Greek literature, from Homer to Hellenistic pastoral, and tackled the handling of fundamental ways of thought - use of simile and metaphor, the development of logic - as well as ethics. Haug's book covers the representation of the human body on two centuries worth of Athenian pottery. Snell had more or less one footnote per page, printed at the bottom of the page. Haug has 1620 endnotes, just over two a page for the whole book.

Die Entdeckung des Körpers has three sections: an Introduction of 42 pages, a section entitled 'Bildthemen - Rollenbilder - Körperbilder' of 378 pages with 322 plates, which is the core of the book, and a section on 'Images of the body in context', of 148 pages. The second section breaks down into separate treatments of 'mourners', 'people at festivals', 'warriors and chariots on parade', 'warriors in battle', 'sailors', 'horsemen and riders', 'fighting animals and hunters', 'athletes' and 'mythical heroes and gods'. In one subsection of each of these discussions, Haug confronts the question of how pictorial imagination compares to the imagination on display in literature. This section is supported by a 'Register der berücksichtigten Bildobjekte' (669-716), which lists pots, terracotta statuettes, gold bands, bronze reliefs and one or two other objects (including curiously one ninth-century Phoenician bronze bowl) according to subject (using the categories of Section Two) and period, and notes where those pots are discussed in the body of the text. The third section breaks down into separate discussions of 'changing pictorial themes', 'find contexts', 'functions of pot shapes', 'style', 'pictorial conventions', 'the body and its parts', 'the body as a unit', and finally 'the body in the context of the polis'. Individual sections have conclusions, but there is no general conclusion to the book as a whole, or to the sections.

This summary has already indicated both the strengths and the limitations of this book. The strengths lie in the collection, detailed description, and illustration of a large quantity of pottery. If you want to know what human figure scenes eighth and seventh-century Athenian pots show, this is a treasure trove of material. If you want to know in what contexts Athenians used pots with human figure scenes on them, and in what contexts pots with human figure scenes on them were deposited, Haug has asked the question and reports the answers. So too, perhaps less predictably, if you want to know what happens to noses, ears, mouths, or hair (but not breasts, see below) in human figures on Athenian pottery in this period, Haug has an account (though to find the illustrations you must scramble through the earlier part of the book).

There is a great deal that is extremely useful in these individual accounts. The close comparison of images sharing an iconography reveals very well what is consistently the same, what is a recognized variation, and what is either an individual quirk or just 'noise'. To give one example, Haug is able to show that dancing women and men on LG II pottery hold hands differently (151-152). For each iconographic case-study Haug gives a more detailed account of change over time than has ever previously been available. This frequently has consequences for the way in which individual images are used - as, for example, when Haug is able to show up the problems with Kistler's use (in GFA 4 (2001) 159-185), and early dating, of two LG 1a pots in relation to hoplite reform. Trends in imagery are well traced (with useful summary pie-charts at the start of Section 3).

In the end, however, the classifications adopted and the division of the discussion into these sections undermines the enterprise. If there is a 'discovery of the body' happening, it is surely happening precisely in the contamination between Haug's various categories. We can only understand mourners in the context of the possibility of dancing, warriors fighting in the context of warriors parading, or of fighting against animals, and so on. The conversation between images that the Francophone scholars who brought us La Cité des images (not referenced here) have shown to be central to how imagery on painted pottery works, is lost by this division. Notably, Haug fails entirely to engage with Susan Langdon's 2008 book Art and Identity in Dark Age Greece, 1100-700 B.C.E. (Cambridge University Press). To have acknowledged the contribution Langdon makes in that work would have demanded total reorganization of this.

Haug comes close herself to seeing the problem. Her overlapping accounts from different angles of what happens to human imagery over these two centuries themselves draw attention to the ways in which the categories of Section 2 are not in fact discrete. But establishing further parallel accounts of change over time that cut the cloth in a different way cannot restore the unity to the human body - and particularly not when they treat the human body in isolation from animal bodies, and painted pottery largely in isolation from other representations of humans (for all that Haug divides the gold bands catalogued by Ohly into her various categories, only a tiny number are referred to in the text, and none illustrated).

Given the sheer mass of material here, might Haug have organized her work more fruitfully? That the answer is yes emerges simply from considering the question of gender. Haug is certainly not gender-blind - not only is she keenly interested in how men and women are distinguished in these images, but she is prepared to assert that in certain circumstances (e.g. dancing with branches in the early 7th century) men are shown as effeminate. But that claim of effeminacy is never adequately spelt out. To do so would demand thinking about how men are presented overall, and how women are presented overall. Haug hints on a number of occasions that she does not think that decisions to show women's breasts are without erotic significance. But breasts are not a body part she is willing to examine, and the hints never developed.

In a book that is otherwise 'theory-light' (it manages to concern itself with what he would have called the 'period eye' without ever referencing Baxandall, for example), Haug references in her introduction the work of Judith Butler. Butler's notion of performance, particularly when taken with Gell's Art and Agency (Oxford, 1998, also referenced), might have offered a much more effective approach to this material. As it is, whereas Snell's Entdeckung was a book with a mind of its own, a book with a thesis, Haug's Entdeckung is a book with a lot of body, a thesis-book.